Vos in control but still rules herself out 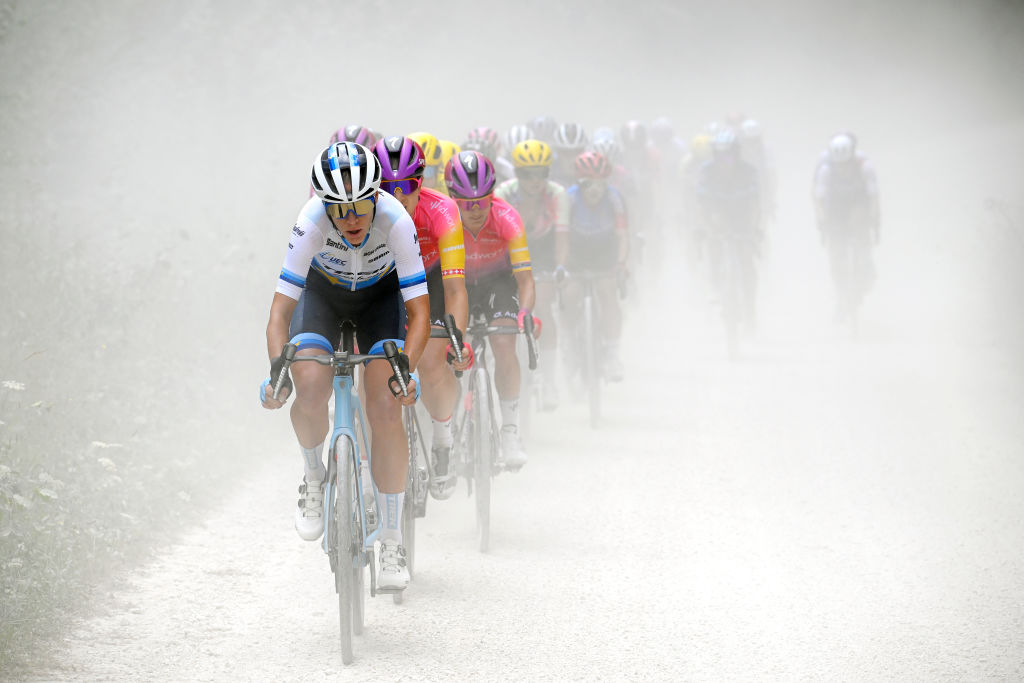 Marianne Vos continues to exert a tight grip on the yellow jersey in the Tour de France Femmes but knows her tenure might be short-lived.

“You have to be realistic with the climbs coming this weekend,” Marianne Vos said of the looming stages of the Tour de France Femmes in the Vosges mountains. “Normally, the GC riders will be very strong and take a lot of time, so it’s a different kind of racing at the weekend. I’m very happy to wear the yellow jersey now.”

Clearly, she doesn’t consider herself among that select GC group even if she is leading the all-conquering Jumbo-Visma team, during yet another prolonged spell in the maillot jaune and even if by her own admission, she has almost enjoyed the experience of leading the Tour de France.

“You always hear about the guys at the men’s Tour that if you’re in the yellow jersey, that there’s a lot going on, there’s not much time, and I have to say it’s true,” she said.

“It’s also true in every stage race that recovery is very important. You try to do everything well, to stay focused for the next day, and that’s the main thing. You especially have to try to sleep well. That’s the most important thing, I think.”

The garlanded Dutchwoman is handling her first experience of the Tour de France Femmes brilliantly and has been the model of consistency so far. She came close to winning on the Champs-Élysées, won stage two, and has been in at the death of every stage since.

On the gravel roads of stage four, she again showed her experience and resilience.

“If you go through it ‘nicely’, then you’d say, ‘Oh, this is quite nice’. For me it was okay. We spent a lot of energy to stay in front with the team, and we really had to fight for position, especially before the gravel sections and the climbs as well, but then of course you also need a little luck.”

But, she added, “I can imagine for the riders who are going for GC, it’s a pretty difficult day and stressful as well.” There she was again, writing herself off. In truth she is probably right, with the climbers expected to come to the fore on Saturday and Sunday particularly.

Asked if some would even be pleased that the gravel roads are behind them, she smiled. “There are probably some riders that are relieved for sure. As a team we try to focus on the day itself, but we just knew we had to try and stay in front and stay out of trouble. We weren’t scared, but we knew to stay out of trouble.”

So far, she’s hardly put a foot wrong, but when the peloton reaches the Vosges, Vos knows that a new race starts. “It’s different at the weekend,” she said on the eve of the longest stage of the race.

Thursday’s 175.6 kilometres to Saint-Dié-des-Vosges exceeds the UCI’s maximum distance for women’s racing of 160 kilometres, but as this is an ASO race, it’s hardly been discussed.

“It’s a very long stage,” she said, “but I don’t think it will make much of a difference because of the length. All the girls that are here are very well trained and on the highest level. Maybe in the final it will make a difference.”