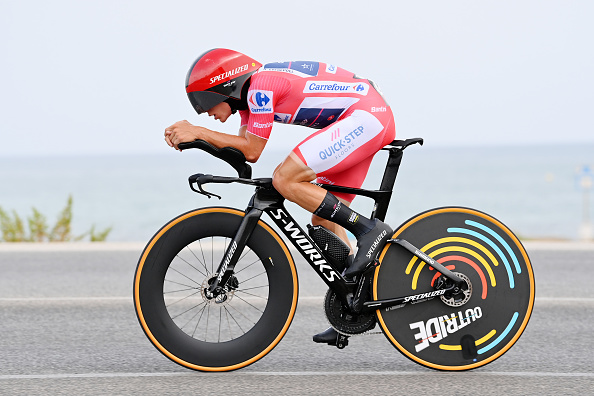 60. The number said so much. As Remco Evenepoel readied himself for launch on the start ramp of the Vuelta’s stage 10 time trial in Elche, the TV graphics revealed that his bike was fitted with a 60-tooth chainring compared to the 58s used by his closest rivals. It was one of those stats that instantly highlights a key aspect of racing performance. This one said: “I’m a level above the rest and I’m going to smash this TT.” He duly did, claiming his first stage win of the race and, more significantly, opening up what is already looking like a race-winning lead.

As the second half of the race gets under way, the Belgian’s most dangerous adversary as he attempts to clinch his and QuickStep team’s first Grand Tour success appears to be Covid-19, which is particularly persistent at the longest and most prestigious stage races for obvious reasons. Prior to stage 11, Simon Yates and Pavel Sivakov, both in the top 10 on GC, joined the long list of riders forced out by the virus. Three riders from Kern-Pharma also succumbed to this most dogged of maladies that is warping the outcome of yet another big race.

On the road, Evenepoel’s rivals don’t appear to be anywhere near as threatening. Primož Roglič still appears to be feeling the effects of the injuries that forced him to abandon the Tour de France. Enric Mas has been the most the Belgian’s most persistent challenger in the mountains, or at least the one able to hang on the longest when Evenepoel turns the screw, while Carlos Rodríguez and Juan Ayuso (now back up to fifth after Yates’s departure) are both Grand Tour debutants who are underlining that the hype about their future potential in these races is fully justified.

It’s been fascinating watching Evenepoel see off these purer climbing talents. In the Middle Ages, the Spanish Inquisition was renowned for its use of the rack as a method of torturing those it perceived as sinners, the miscreant laid out and tied by the hands and feet, their bindings tightened with turns on a wheel. Evenepoel employs a cycling version of this torturous tactic in the mountains, never appearing to accelerate but gradually upping the pace so that rider after rider has to admit that they can’t take any more and fall back.

Speaking to American ex-pro Andy Hampsten about racing against Bernard Hinault in the mountains, he said that the five-time Tour de France winner wasn’t a climber as such, rather “the strongest rider I ever raced against”. Evenepoel races in the same manner, riding on the front, pressing harder and harder, forcing his rivals to crack. Clear comparisons can be made with Eddy Merckx’s style as well.

In the days before the Vuelta began, I tipped Evenepoel for victory because he’s looked a very different rider to this season to the one who struggled on his Grand Tour debut at the 2021 Giro d’Italia. The powerful style is the same, but there’s more self-assuredness, a belief that he can and will beat the very best. This was particularly evident in the way that he bulldozed a stellar line-up at Liège-Bastogne-Liège, his winning attack close to the top of La Redoute made at a point where it long seemed impossible for any rider distance their rivals.

This Vuelta may be far from done, but watching how Evenepoel has dominated the race it’s impossible to avoid thinking ahead. Firstly, to the Worlds road race in Wollongong, Australia, where the course looks ideal for his powerhouse style. The fact that it takes place just a week on from the end of the Vuelta could mean that jet leg will be an issue, while sharing leadership with Wout van Aert in a very strong Belgian team may prove as problematic as it was last year in Leuven – are there shades of Merckx vs Roger De Vlaeminck vs Freddy Maertens internecine rivalry between Belgium’s current superstars?

Beyond that, Evenepoel will surely make his Tour debut next summer, and what a tasty prospect the Remco-Tadej Pogačar-Jonas Vingegaard clash will be. Their qualities and styles are slightly different, making for an enthralling contest. Tour winners Pogačar and Vingegaard will have experience on their side, but that might not be enough in a race where it’s said that the strongest rider always prevails. Based on what we’ve seen at the Vuelta, Evenepoel might find an edge there.