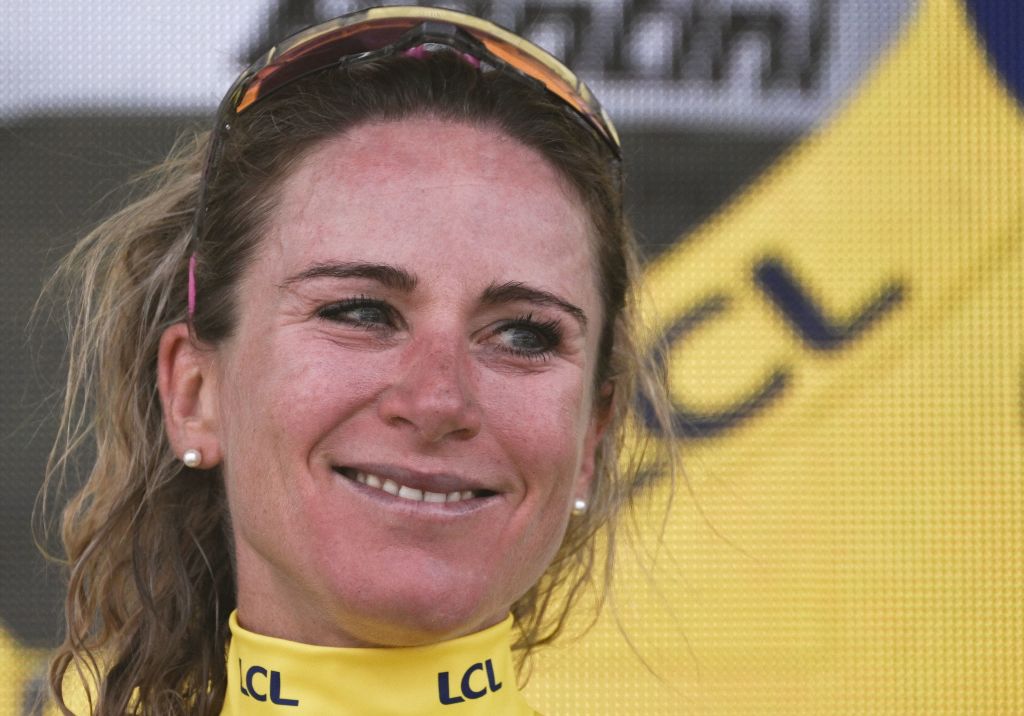 Annemiek Van Vleuten’s dramatic win on Stage 7 has put her on the verge of Tour victory today. Jeremy Whittle reflects on her ‘miracle’ ride.

Annemiek Van Vleuten’s Canyon bike will be all yellow for today’s final stage in the Tour de France Femmes. So will her bidons and her helmet.

The assumption is that 39-year-old Van Vleuten has clinched the overall win in the first Tour de France Femmes avec Zwift after her epic breakaway in the Vosges on stage 7 to Le Markstein on Saturday.

But for those who witnessed it first-hand, there had been a certain degree of incredulity at her recovery from being so ill that she was unable to pck her suitcase, to being the all-conquering Queen of the Mountains over three first category climbs.

It’s always an issue when one rider makes their peers look distinctly average.

Even Van Vleuten described her ride as a ‘miracle.’ Of course she has done this before — long, lone breaks are her speciality. This time though, the Big Break came just 72 hours after she had been so ill that her team mates had been pushing her and she’s been forced to do a ‘Dumoulin’ at the roadside.

Only eight riders finished the seventh stage within ten minutes of the flying Dutchwoman. FDJ-Suez rider Evita Muzic, was one of them.

“She went deep and it was very, very hard,” Muzic told the French media after the stage. “Behind we had a good group, and there were three of us (FDJ), so we worked for Grace Brown, to limit the gap, but no matter how hard we worked we were losing time.”

Muzic, was one of several riders, including a shell-shocked Demi Vollering, to be stunned by Van Vleuten’s superiority.

“To be honest, yes, it’s out of the ordinary, because we all worked hard,” Muzic said.  “There were five of us in the group, and we were losing time all the time. We couldn’t give more: she was on another planet.”

If Van Vleuten showed any weakness, it was in evidence through some occasionally hesitant descending. “With the second pass and the long valley,” Muzic added, “I thought she might have a little more trouble. But hey, it wasn’t too difficult for her.”

How do you measure Van Vleuten’s performance though?

Epic though her attack was, it inevitably provoked raised eyebrows. The language from some of her peers — the references to it being ‘not normal’ or from ‘another planet,’ laden with obvious references to past tainted exploits — will only have fuelled a degree of scepticism.

In short, did she humiliate her peers, or is she just that much better?

There’s no doubt that, as Marion Rousse had said herself, the women’s peloton lacks depth, which might also explain why Van Vleuten was so dominant in the climbs. Sceptics are triggered by any extraordinary performances in Grand Tours — men’s or women’s — and this was definitely one of them.

But in the context of the reborn women’s Tour de France, with a queen stage over three first category climbs, against the backdrop of the past week of racing, the expectations and pressure of the modern Tour and a new event, there are not really any contemporary benchmarks — at least not yet.

Of course, it would still be good to know — beyond the usual press conference platitudes, the mantras of experience and professionalism, harder training over longer periods and so on — exactly how she achieved her Lazarus-like comeback.

“I have a lot of capacity, then it comes down to fitness, and that’s something I’m really good in,” she said. “This stage suited that really well. If my colleagues continue for some more years, for sure they can do it…”