Tour on a knife edge in final week 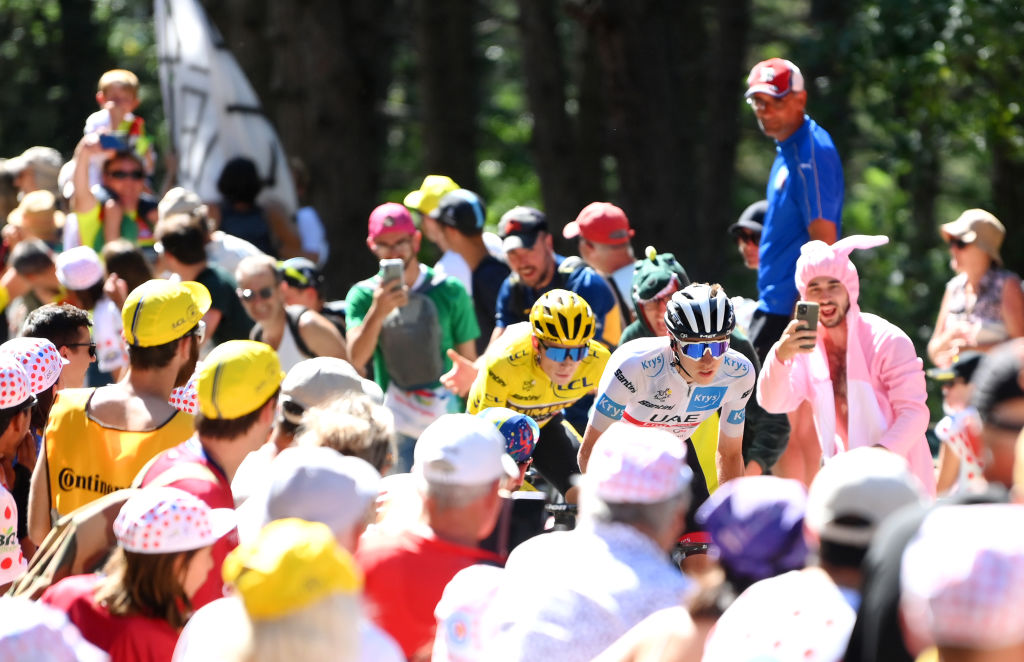 Vingegaard (in yellow) leads Pogagar (white) by over two minutes on the GC - but the title is up for grabs as this unpredictable Tour heads towards its finale. (Getty Images)
Monday 18th July 2022
Share

As the remaining 152 riders of the Tour de France take their final rest day in Carcassonne, it’s anyone’s guess who will be standing in yellow in Paris on Sunday.

Intense heat, crashes, COVID positives, cobblestones, climate protestors, and from-the-gun racing have made for an erratic and extraordinary first 15 stages of this year’s Tour. With six stages remaining, including three tough days in the Pyrenees, anything can, and likely will, happen.

When Pogacar took the maillot jaune on Stage six, and held it for the five subsequent stages, it appeared the GC battle might be over, with the 23-year-old Slovenian set take a third consecutive title.

However that all changed on a thrilling Stage 11 in the Alps, just one day after George Bennett, one of Pogacar’s key mountain lieutenants, was sent home due to COVID. Jumbo-Visma attacked Pogacar ruthlessly on the high-mountain stage, resulting in an uncharacteristic collapse for the young Slovenian star before the summit of the Granon.

Vingegaard won the stage and took the yellow jersey. Just like that, Pogacar was outnumbered and on the back foot; the GC race had been turned on its head.

Pogacar bounced back in the days that followed, attacking Vingegaard at moments both expected and unexpected, but to no avail. And with Pogacar’s UAE Emirates team down two riders, it might appear that Vingegaard is poised to win his first Grand Tour, as well as a first Tour de France for the Dutch Jumbo-Visma squad.

However Sunday’s stage saw the loss of not only Roglic for Jumbo-Visma, but also “domestique deluxe” Stephen Kruijswijk, who crashed and separated his shoulder.

Just moments later, Vingegaard was also on the ground, tangled up with teammate Tiesj Benoot 60km from the finish of what was supposed to be a relaxing transition stage; a day for the sprinters.

Vingegaard finished safely in the bunch with a bit of road rash and a torn jersey, but the net result was that three Jumbo-Visma riders had been on the ground Sunday, including the yellow jersey, and the team lost two of its most valuable mountain climbers with the Pyrenees looming.

Asked about Roglic and Kruijswijk abandoning the race, Vingegaard answered, “They’re two very, very important teammates — two very, very strong riders — so of course, it’s not nice. It was quite a bad day for us.”

Jumbo-Visma team director Grischa Nierman put it more succinctly when asked about Sunday’s dramatic stage, saying simply, “It was a shit day for us.”

With Roglic and Kruijswijk gone, Vingegaard will be relying heavily on American climber extraordinaire Sepp Kuss in the Pyrenees. A stage winner in Andorra last year, Kuss has shown flashes of brilliance at this Tour, most notably on the summit finish at l’Alpe d’Huez, where he supported Vingegaard as he withstood Pogacar’s attacks. And though this is his third consecutive Tour riding for the GC victory at Jumbo-Visma, Kuss has never faced such responsibility as sole mountain domestique for the maillot jaune.

In terms of team depth, Vingegaard and Pogacar are now closer to equal footing, each down two men. And while Vingegaard would appear to have the upper hand, it’s not so simple. Though he’s been able to weather Pogacar’s attacks, near-hazardous heat, and a Stage 15 tumble, and though he holds a healthy lead of 142 seconds, the 25-year-old Dane has never led a Grand Tour before, let alone won one.

Pogacar, on the other hand, has won the Tour twice and, in essence, has nothing to lose. Rather than accept defeat, the young Slovenian has sworn to fight all the way to Paris. It must be said, however, that Vingegaard has not shown any weakness.

In addition to his duel with Vingegaard, Pogacar’s other battle may end up being with himself. The Tour’s youngest winner in 116 years when he took his victory in 2020, Pogacar is unaccustomed to being beaten, and his racing style often shows it. The Slovenian has repeatedly sprinted from the GC group at the end of stages that were won moments earlier from the breakaway, looking to take time that simply is not there for the taking.

He burns energy unlike any Grand Tour contender in recent memory; on Stage 14 he attacked inside the first 10km of the 192km stage, drawing out Vingegaard and his teammate Wout Van Aert before they ultimately returned to the peloton.

On the penultimate climb of the Col du Galibier on Stage 11, Pogacar sprung loose of Jumbo-Visma’s vice grip only to tow Vingegaard up the remainder of the climb; Pogacar then had an uncharacteristic collapse on the slopes of the Col du Granon, losing the race lead, perhaps for good. Andy Schleck, the 2010 Tour winner, told journalists on Sunday that he believed Pogacar would still be leading the race if he had raced more conservatively.

“Why did he attack on the Galibier?” Schleck said. “All these stupid mistakes of sprinting for two seconds and wasting all this for nothing in the first week. Then you come to a point where you are fucked and you lose two-and-a-half-minutes. He could still be in yellow if he’d raced differently.”

And there are other wildcards that could come into play.

The British squad Ineos Grenadiers has two riders in the top five —Thomas, in third, and Adam Yates, who sits fifth, 4:06 down. Conventional wisdom would dictate that Ineos will send Yates, a talented climber, on the attack as the race hits the Pyrenees.

The first Pyrenean mountain stage takes place on Tuesday, however Stages 17 and 18 feature summit finishes where the biggest time differences are usually made; Wednesday’s stage finishes at Peyragudes, while Thursday finishes at Hautacam, scene of an infamous Danish exploit, by Bjarne Riis, in 1996.

Looming in the shadows, however, is the ever-present spectre of COVID.

On Sunday, two riders who had previously won stages at this race — EF Education–EasyPost’s Magnus Cort and Israel-Premier Tech’s Simon Clarke — were sent home after testing positive for the virus, bringing the total at this race to eight.

Six of those riders were forced to leave, while two, including Pogacar’s teammate Rafal Majka, were allowed to continue racing as they were deemed to have a low-enough viral load so as not to be contagious. The entire Tour peloton was to be tested on the rest day, raising the possibility that more riders will be required to leave prior to Stage 16 on Tuesday.

And while the battle for the maillot jaune continues, there’s little question which rider has stood out as the most captivating of this Tour de France — Vingegaard’s teammate, Belgian Wout Van Aert. The three-time cyclocross world champion has won two stages, finished second on four occasions, spent four days in the yellow jersey, and has seemingly locked up the competition for the green points jersey.

The winner of three stages last year — a mountain stage, a time trial, and a field sprint — Van Aert has emerged as the most exciting and versatile rider in professional cycling, perhaps more valuable than a Tour de France champion. While his tactics have left many scratching their heads, there’s no doubt of his value to his sponsors.

Van Aert spent Sunday’s stage riding in the day’s main breakaway before dropping back to the bunch; he ultimately contested the field sprint in the medieval city of Carcassonne, beaten by compatriot Jasper Philipsen (Alpecin-Deceuninck) in a bike throw.

Just how Jumbo-Visma team management redirects Van Aert’s strength and utility in the final week, like so many other factors at this unpredictable Tour, will remain to be seen. He may yet prove pivotal to Vingegaard’s hopes of fending off Pogacar, when the Slovenian goes on the attack, as he surely will. There’s little doubt that the race leader will be counting on Van Aert’s support, when crunch time comes.

Jasper Philipsen edges Stage 15 victory from green jersey Woot Van Aert, in Carcassonne. Only three stages of the first 15 have ended in bunch sprints. (Getty Images)
Massive crowds turned out to see the Tour during the first three stages in Denmark. (Getty Images)
Magnus Cort in the soggy, Stage 1 time trial in Copenhagen. The Danish rider went on to spend much of the first week in lone breakaways. (Getty Images)
The cobbled sections of Stage 5, along the Belgian border, led to elements of chaos as expected - but by the end, reigning champ Tadej Pogacar had swapped the white jersey for yellow. (Getty Images)
Wout van Aert, with his non-stop attacks, has typified the all-action, unpredictable nature of this year's race. (Getty Images)
Stage 10 was stopped for ten minutes by climate protestors blocking the road. According to the ASO's own figures the Tour's carbon footprint is equal to the annual output of 68,000 French people. (Getty Images)
Jonas Vingegaard on his way to taking yellow on Stage 11.
Pogacar lost the yellow jersey on an epic, attack-filled Stage 11, working himself to exhaustion with his UAE team depleted by Covid. (Getty Images)
Stage 12, Bastille Day: Britain's Tom Pidcock, 22, on his way to becoming the youngest-ever winner of an Alpe d'Huez stage in the Tour.
Going into the last week of the Tour, Vingegaard - last year's runner-up - holds a 2 mins 22 lead on the GC. (Getty Images)
Share