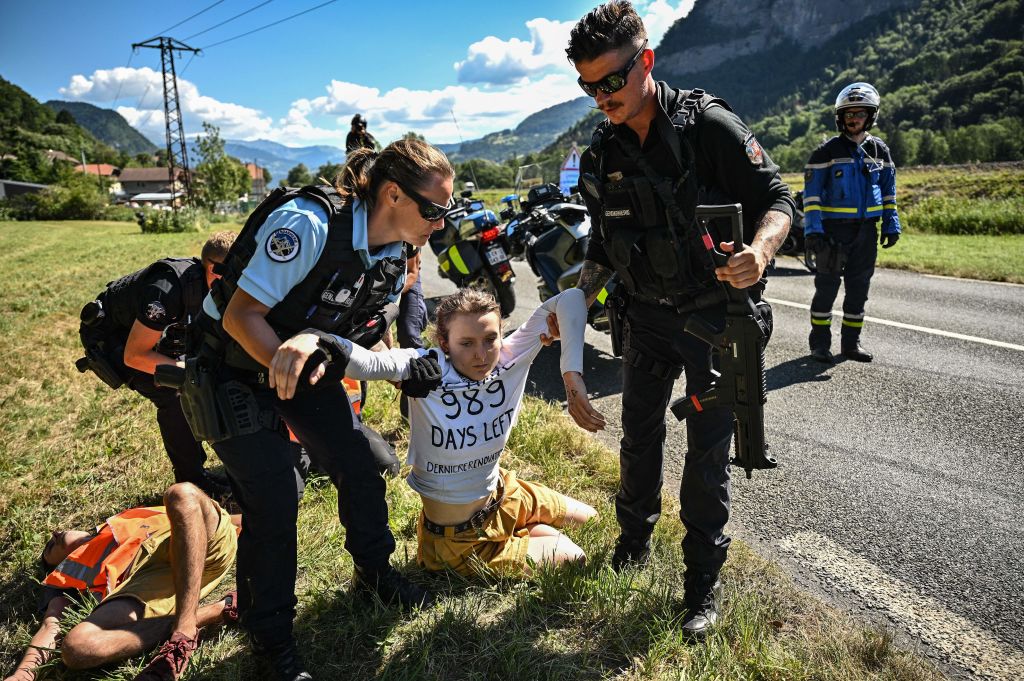 Tour de France officials and team sports directors were accused of ‘putting the boot in’ on climate change protestors towards the end of today’s 10th stage of the Tour from Morzine to Megève.

The mountain stage to the Alpine altiport was paused with around 36 kilometres to race after a small group of protestors lit flares and sat on the race route. A group called Dernière Rénovation claimed responsibility for the protest which halted both the day’s breakaway group and the peloton behind.

“Non-violent disruption is our last chance to be heard and avoid the worst consequences of global warming,” the group said.

As official cars, police and motorbikes slowed to a halt, Alberto Bettiol of EF Education-EasyPost, riding ahead of the breakaway, was stopped, as was the breakaway and the peloton.

Eyewitnesses on media motorbikes reported that race officials and some team staff all moved the protestors off the road, with Sir Bradley Wiggins, reporting on the scene for Eurosport, saying that “it really was going off”.

“It was quite crazy,” Wiggins told Eurosport viewers. “A lot of people getting quite angry, some of the directeur sportifsgot out the cars, stuck a boot in.”

“You can see Pascal Lino, ex-Tour de France yellow jersey, he threw one down in the ditch and another lady had her legs under the car.”

In recent years the Tour, under attack over its carbon footprint, has made a significant effort to improve environmental awareness. This year’s ‘roadbook’, the manual given to all those working on the race, states that “for more than a decade, the Tour de France has been implementing measures to reduce its environmental impact”.

However, in 2020 during the pandemic Tour, the race was heavily criticised by a series of recently elected ‘green’ mayors in some of France’s major cities. The mayor of Lyon described the Tour as polluting and lacking an environmental conscience, and there have been multiple calls for the race to reduce its carbon footprint.