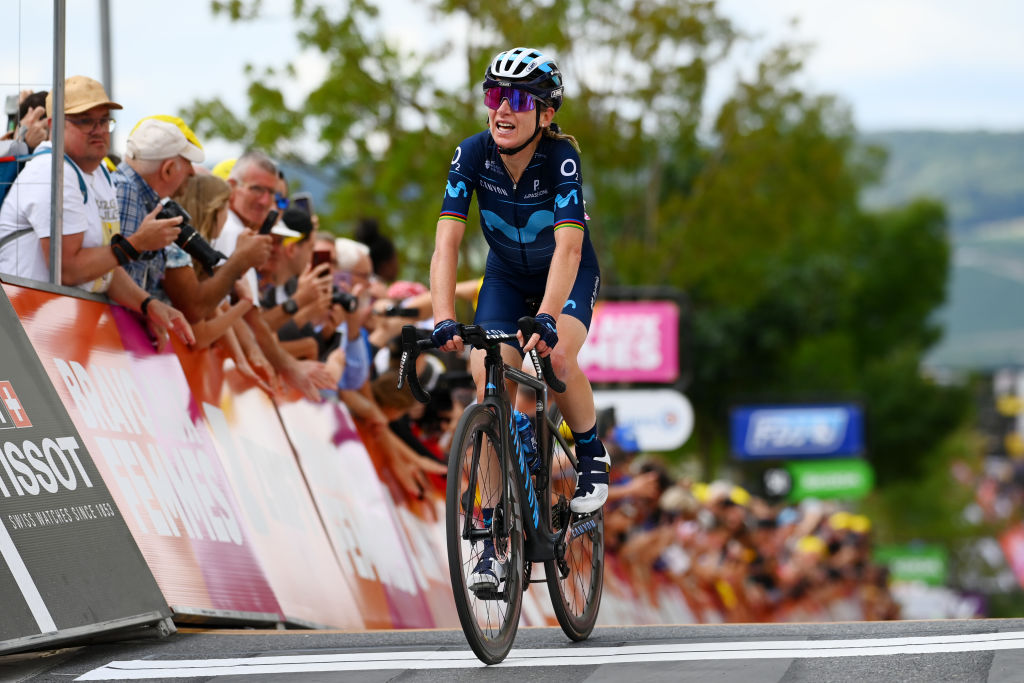 Annemiek Van Vleuten of Movistar Team crosses the stage three finish line after a day that was unforgettable for all the wrong reasons. (Getty Images)
Friday 29th July 2022
Share

After a torrid start to the Tour de France Femmes, marked by a debilitating stomach bug, Annemiek van Vleuten appears to have turned the corner.

The Olympic time trial and former World Road Race champion, who started the eight-stage race sick, has survived so far and now, with the peloton heading into Saturday and Sunday’s mountain stages, is looking ahead to her preferred terrain. Even though the 39-year-old came close to abandoning the race, she has managed her crisis well and is still only 1”28 seconds in arrears to race leader Marianne Vos, who has already ruled herself out of overall contention.

Van Vleuten, winner of the women’s Giro, came into the race as the hotly tipped favourite, but appeared to be almost certain to quit after 48 hours of illness, including what she herself called ‘a Dumoulin’ – an enforced toilet stop – on stage three.

“When the race started, things were really very, very tricky,” she said. “The main thing was finding a good spot to ‘go’ on the side of the road!” A fine of 100 Swiss francs was a small price to pay, and Van Vleuten now says that the worst is behind her. “My initial objectives,” she asserted, “have not changed.”

Somehow then, she has hung on.

Or, have her rivals failed to seize the day, particularly on the gravel roads of stage four? Will she now find her best form and make up for lost time on either Saturday or Sunday?

According to her French teammate, Aude Biannic, “everybody was so focused on making sure that they protected their own leaders on the gravel stage, that they didn’t notice that she wasn’t at her best.”

“They didn’t force the pace, luckily for us, because that would have been a disaster. So, we have got through the difficult stages and we’re happy with where things are at.”

“Monday and Tuesday,” Biannic said, “given her state of health, we didn’t push things. She said it was her worst day on a bike and wasn’t even sure if she could finish the stage. She couldn’t even eat or drink.”

But as Van Vleuten says, the worst is behind her. “I’m back in business,” she said. “It’s very encouraging to have got through the worst days and still be in with a chance of winning overall.” Those ahead of her on GC have been warned.