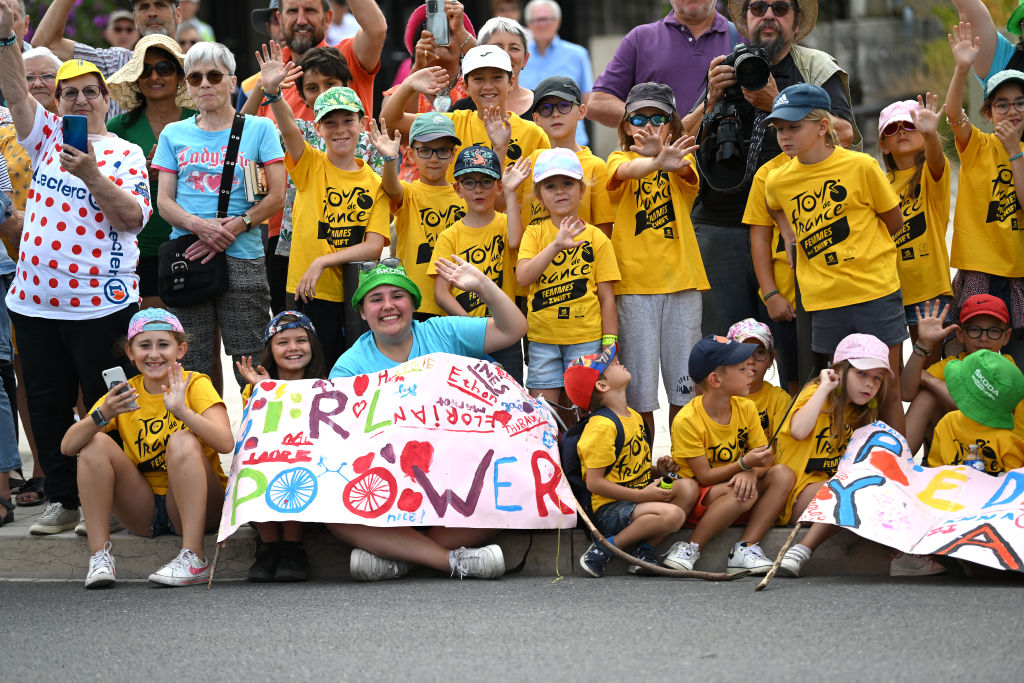 When was the last time in a men’s race that you saw the break engaging with the sound systems at the side of the road? The joy and openness of the women’s peloton is already winning hearts and minds.

There was a moment in the fifth stage of the Tour de France Femmes when all the years of campaigning and battling for recognition and prestige seemed worthwhile, or even incidental, to the fact that the women’s Tour de France is here, is a success and is also crucially, offering something very different to the sometimes po-faced men’s peloton.

From Lorena Wiebes in Paris to Marianne Vos in Provins and Cecilie Uttrup Ludwig in Épernay, the revival of the women’s Tour is already providing feelgood stories and a sense of shared joy that is rare in road racing. Open, confident and empowered, it feels as if the women’s peloton is already opening up a new world of possibilities. It’s ironic given that there was so much resistance for so long, that the TDF Femmes is kicking down doors of profile and popularity that were, for too long, presumed out of reach.

Stage five’s four-rider breakaway was a case in point. Committed, enthused and motivated there was a carpe diem quality to the quartet that was refreshing and engrossing. The break, which slipped clear with 142 kilometres to race, included Victoire Berteau (Cofidis), Antri Christoforou (Human Powered Health), Emily Newsom (EF Education-TIBCO-SVB) and Anya Louw (AG Insurance-NXTG).

Of the four, perhaps the biggest personality was young Australian, Louw. After the finish Stelvio caught up with her to run through her day in the break, during which she pumped her fist and exhorted the fans to cheer even louder.

“I’m only 21 years old and we’re the youngest team in the Tour de France,” she explained, “so when we’re out there and there’s so many spectators coming out to watch women’s cycling, you can’t not have fun. So, I was trying to cheer everyone on a little bit and crack a few jokes and do all that. They had some music going and were doing some chanting and stuff, so I asked for more!”

Despite enduring what some might describe as a baptism of fire, Louw and her team have relished being part of the Tour peloton.

“Our team’s really young,” she said. “We lost two riders on the second stage and they were maybe two of our strongest riders. But today (stage five) was a stage where there were a lot of opportunities to get in the breakaway early and stay away. We knew that a lot of people were already down on GC and it was a possibility that other teams would let something go up the road.”

“There were a lot of attacks in the first 20 kilometres. At about the 20 km mark there was a little gap on the left and I decided to just go, with a bit of speed. I’m a long way down on GC so I knew that if I was up the road with a few others like me, they weren’t going to get an immediate reaction from the big teams. I was lucky enough to get into a move and hang in there for as long as possible, which got pretty hard in the final.”

With a lead that peaked at over three and a half minutes, Louw and her companions began to dream of winning a stage, something that passes through the mind of every breakaway artist in the Tour de France. “I was secretly trying to do a little bit less than everyone else,” she admitted. “I think everyone was thinking the same though, because there’s always that chance that you’ll stay away and then you’ve spent your energy.”

In the end however it wasn’t to be, and, as the peloton closed on the break, Louw found herself swept up. The stakes are higher in the Tour than in any other race, something that she has grown to appreciate. “I do feel it [the pressure] a little bit,” she said, “but like I said earlier, I have a specific job to do. Today it was to get into the break, so I just try and execute that role as best as possible.

“I definitely feel that it’s bigger,” she said of the Tour. “It’s possibly the biggest race that women’s cycling has ever had. I feel quite relaxed being here, but the bunch is quite nervous. I was hearing on the radio that there were lots of crashes behind us. I hope everyone involved is okay – it was lucky we were up the road.”

With the Vosges mountains on the horizon and a series of hard climbs to race, Louw, like others in the women’s peloton, admits she is entering unknown territory. “I haven’t done too many climbs that long, but I assume that today [stage five] has taken a lot of energy, so I’m going to use Friday and maybe Saturday to try and recover as best I can. Given the course, I might be at the back again. Goodness knows what I’m in for!”