Bennett: “There’ll be one day when it just goes apeshit” 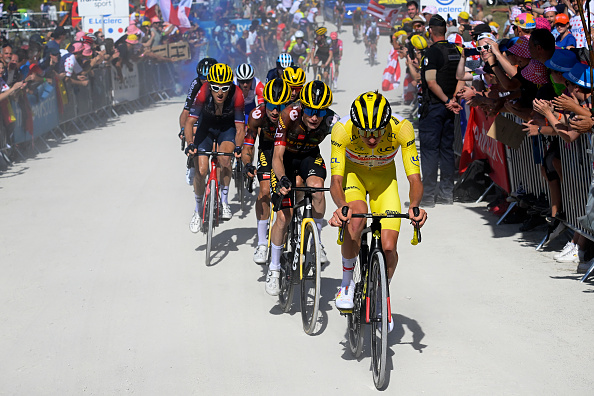 It was little surprise when Tadej Pogačar won his second consecutive stage as the Tour de France raced towards its first summit finish at La Super Planche des Belles Filles. The Slovenian always relishes an uphill finale, and he showed with his canter to victory at Strade Bianche back in March that he’s equally at home on the kind of dusty dirt road that the riders had to grind their way up for the final kilometre to the line.

What was more remarkable, though, was the Slovenian rider didn’t put all his rivals out of sight on the steepling ascent through the Vosges forest. Sure, his victory did result in him reducing the number of riders within a minute of him from seven to just one. But, even though most of them lost at least a little ground, his principal rivals finished the stage with their motivation raised rather than dimmed.

Jonas Vingegaard was the pick of them, the Dane’s attack going into the final insanely angled corner carrying him past the hugely unfortunate Lennard Kämna, the last survivor from the break who was a mere 80 metres from victory, and to the verge of his debut stage win, only to see Pogačar clamber past him with his final few pedal strokes. Not far behind them were Vingegaard’s Jumbo-Visma partner-in-crime Primož Roglič and Ineos Grenadier Geraint Thomas, who climbed to third, looks every bit as good as he was when he won the Tour in 2018, and has three of his teammates in the seven places behind him.

It was, in short, a stage where most of the big hitters not only showed up, but in doing so showed that there’s still life in the GC battle. This contest was always billed as being between one superlative athlete and rival teams that have numbers on their side, and after La Super Planche that’s exactly how it’s poised.

The advantage still lies with Pogačar, but there are, as Thomas highlighted, some indications of weakness in the UAE Team Emirates ranks, chinks that Ineos and Jumbo believe they can exploit. “Pogačar’s riding really well. But I think everyone senses a little vulnerability in this team. They’re obviously still riding really well, but there’s a few creaks in there. And we’ve got numbers, Jumbo have obviously got numbers. There’s a lot of other good bike riders and teams in the race as well,” said the Welshman.

The most obvious sign of this creaking was Rafał Majka’s plea for Pogačar to pass him as the pair led the yellow jersey group towards the final gravel section that led up to Super Planche. The Pole apologized after the stage for making a mistake, his waved plea for Pogačar to come through apparently arriving earlier than was planned, but at the moment when Majka had reached his physical limit and couldn’t offer the degree of help that had apparently been expected or pre-planned.

George Bennett, who switched from Jumbo to UAE over last winter, said he felt that his team had provided strong support to their leader over the first week, but admitted he’s under no illusions about what’s likely to happen in the next few days. “There’ll be one day where it just goes apeshit, a day when Roglič goes in the break, when Sepp [Kuss] drops everybody,” said the Kiwi climber. “We never get complacent and we expect more every day. Maybe it’ll be a sprint stage and they’ll put the big guys on the front in the crosswind.”

Bennett pitched this battle as being between “the best rider I’ve ever seen in my life”, his team leader Pogačar, who is always likely to come out in a one-on-one duel, and teams that will hope to use numbers to their advantage. “Jumbo have an advantage of having two guys that are dangerous, they can set up a lot of situations. So we’re gonna have a really, really big battle.” Then he added, with a broad smile, “And, as a fan of cycling, I’m looking forward to it.”

Bennett’s final comment no doubt encapsulated the feeling of many fans. Pogačar is the strongest individual, but Jumbo and Ineos have stronger teams. History insists that the strongest rider always prevails at the Tour, but sport is never predictable, as the Slovenian highlighted himself when he turned the race upside down at La Planche des Belles Filles in 2020. “Apeshit” can happen.