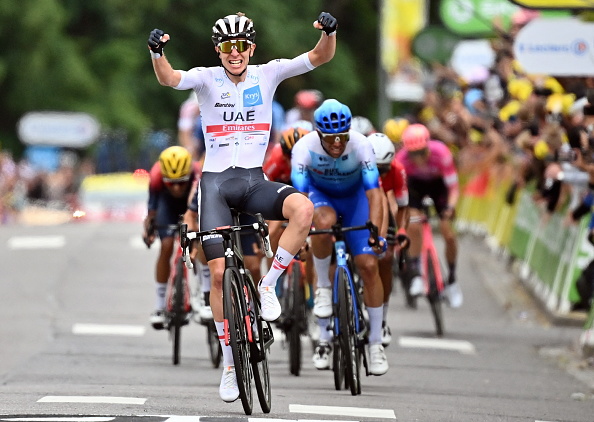 Is that it? Is the Tour de France over as a contest?

It isn’t, of course. The race is not even a third done, and having dashed gleefully away from the remnants of the Tour de France pack as it raced up the Côte des Religieuses in Longwy to claim the double of stage win and yellow jersey, defending champion Tadej Pogačar’s lead is a mere four seconds over Neilson Powless, while 2021 runner-up Jonas Vingegaard is 31 seconds back and there are no fewer than four Ineos Grenadiers within a minute of the young Slovenian.

However, when we look back on this race in two weeks’ time, will Pogačar’s scamper to victory and scattering of his rivals in Longwy be this race’s pivotal moment, in the same way that his unmatchable assault on the Col de Romme proved to be eight days into last year’s edition?

Friday’s stage to La Super Planche des Belles Filles will offer a clearer verdict on this. Yet, listening to riders and team directors in the bus paddock above the finish line in Longwy, the sense of inevitability about Pogačar winning his third Tour in a row is palpable. Ineos director Steve Cummings said that he was pleased that the British team have four riders so well placed on GC, and insisted the battle for the title is still very much in its early days.

But, when asked about Pogačar’s latest confirmation of his current invincibility, he said: “Normally, in the Tour the strongest rider always wins. And there’s not a great deal you can do about that with tactics. It’s great that we’ve got numbers, because you just never know what can happen, which is why we’ll keep trying. That’s all we have to do.”

Moments earlier, Geraint Thomas, the 2018 Tour winner and now 46 seconds off the lead in sixth place, had offered a typically pithy analysis of the situation when asked a similar question about Pogačar’s latest demonstration of his powers. “It’s certainly going to be hard to beat him. But, at the same time, it’s a long race and so much can happen, can go right and go wrong, a bit of misfortune, perhaps sickness or whatever, COVID – but let’s hope that stays away – and you can just have a bad day,” said the Welshman, adding, “But I don’t think he’s had one yet in his career, so we’ll see…”

It’s been interesting to see how the ‘super’ teams that are the most obvious candidates to face down Pogačar have set about that task. Jumbo-Visma has been on the offensive right from the off, Wout van Aert most evidently. They managed to rattle him a little going over the headlands into Calais at the end of stage four, they’d hoped to do the same over the cobbles into Arenberg the next day but were set back by their own “anything can happen” moments, and they were aggressive again on the stage into Longwy.

Wout van Aert’s presence in the three-man breakaway was mystifying, but team director Grischa Niermann explained that their pre-stage plan had been for the Belgian to get into the day’s escape in the hope that a group of 15 or more riders would form. If it had, suggested Niermann, it would have achieved two objectives: setting van Aert up for a stage win that he probably wouldn’t have had a shot at if he’d stayed in the bunch, because the other sprint teams, having seen the Belgian’s form over the opening five days, wouldn’t have collaborated with Jumbo in setting up a bunch finish; secondly, it meant that Jumbo’s domestiques would have a day off from pace-setting duties on the front of the bunch.

In the end, Jumbo achieved only the second objective. But there was almost certainly a third reason for trying to get van Aert away in a big group on the longest stage of this year’s race. On the equivalent day in 2021, on the undulating roads through the Morvan hills into Le Creusot, a huge break went clear and Pogačar, who missed it, and his team were seriously rattled. The Dutch team must have thought this might happen again, especially given the lack of support that UAE Team Emirates leader has had from his teammates in the opening stages. Ultimately, this didn’t work, but Jumbo should be commended for trying, for their determination to search for chinks in Pogačar’s suit of apparent invincibility.

Turning to Ineos, the other team that much is expected of in the GC battle, team director Cummings explained that their plan for the Longwy stage was to get riders into the break if there were numbers in it, but to hold back if not. “We just tried to cover the big moves, but it’s difficult because we’ve got quite a lot of climbers, so today was a challenge. But we did it really well,” said Cummings, offering a clear insight into where their focus will lie. “In the end, it was a good day I think for us.”

La Super Planche des Belles Filles will provide Ineos with the first chance to let their climbers off the leash. If they have another good day there, this Tour will remain in the balance for a good way yet.