A slow death for the bunch sprinter? 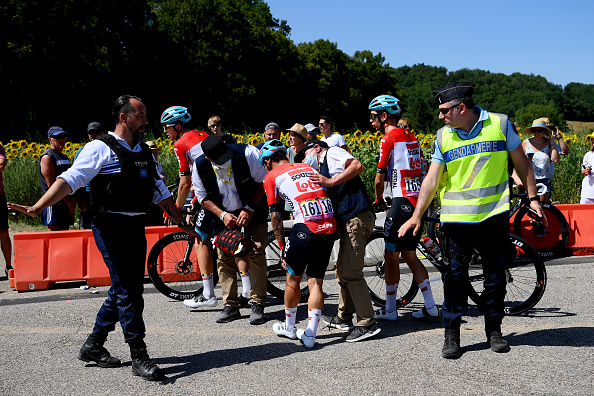 You’ve got to feel a little bit for the sprinters in the Tour de France this year. The race is almost two-thirds done and there has been a grand total of two bunch finishes, both of them on the opening weekend in Denmark, won by Fabio Jakobsen and Dylan Groenewegen, respectively.

Since then, they’ve endured a test by fire, literally thanks to the roasting conditions that have settled over the Tour for the past week, and figuratively thanks to back-to-back Alpine stages that were viciously hard. They’ve kept going, of course, battling against the heat and time limits, primarily because they expected that their chance would come, starting with Stage 13 into Saint-Étienne as the Tour briefly said goodbye to the mountains.

However, the industrial centre has rarely favoured sprinters and it gradually became apparent that they would miss out again as the race negotiated the rolling roads through the Forez region on the eastern side of the Massif Central. Seven riders eventually made it into the break, and they were a rather magnificent septet – world time trial champion Filippo Ganna, two-time European TT champion Stefan Küng, 2019 world road champion Mads Pedersen, French Canadian Hugo Houle, who’s been hugely impressive this season, plus three young but extremely powerful rouleurs in Fred Wright, Matteo Jorgenson and Quinn Simmons.

It would have required a temporary alliance of most of the sprint teams – Quick-Step, BikeExchange, Lotto, Alpecin, TotalEnergies and Intermarché – to reel in an escape with that much firepower, but it never came together, the possibility stymied by Caleb Ewan’s crash with 70km remaining, which ended the Australian’s hopes for the day, the continuing struggles of Peter Sagan, for whom COVID has been his personal Kryptonite, and then Jakobsen being tailed off with 50km to the line.

With 40-odd kilometres left, BikeExchange did attempt to bring back what had become a sextet after Simmons had dropped back having buried himself for Pedersen’s benefit. Initially, they made a good fist of what seemed an impossible task on Groenewegen’s behalf, trimming a three-and-half-minute lead back to a little more than two, but it cost them all three of their domestiques. Lead-out riders Luka Mezgec and Michael Matthews entered the fray, hoping reinforcements might emerge from elsewhere, but the cavalry didn’t appear and they soon surrendered.

Back at the front of the race, victory went to Pedersen, who, like Wout van Aert, is a regular bunch sprint winner with a Classics pedigree that offers a broader range for stage-hunting. The 2019 world champion illustrated this by launching an attack on a hill 10km from Saint-Étienne that split the break into two equal halves, himself, Wright and Houle at the front, Ganna, Küng and Jorgenson behind.

The strength the Dane showed then suggested that he had more than enough speed to sentence his two rivals in the final straight, and he managed that at a canter. “As soon as we got over that climb I was like, ‘Damn, this is going to be a sprint and I’m not going to be able to beat him,’” said runner-up Wright. “I didn’t think he was going to attack at the start of that climb. Obviously, then you’ve got to follow and I did, but I couldn’t go any harder after that.” Pedersen, winner of seven races in 2022, has looked better than ever this season, and seems likely to feature prominently again before the Tour is over.

But what of the pure sprinters? Looking ahead, they have another three chances at most, the first arriving on Sunday’s stage into Carcassonne, where Mark Cavendish took his Eddy Merckx-equalling 34th stage win in last year’s race. Beyond that, there’s a flat run into Cahors on the final Friday, although that stage often falls to a breakaway. Then there’s Paris, a nailed-on bunch finish. So there could be as few as three bunch sprints, and no more than five, a total you’d expect to see at the climb-heavy Vuelta a España.

Whether or not you regard this as a good thing, there’s no doubt that the shape of Grand Tours is changing. Their organisers are plotting routes to encourage attack-minded riders, putting in obstacles and setting traps even on stages that would once have been lapped up by the sprinters. By doing this, they appear to be saying that sprint-friendly stages are boring and aren’t tough enough, that sprinters need to work harder for their victories. But the danger is that sprinters could be pushed to the sidelines and, as a consequence, the variation in racing that makes Grand Tours so captivating will be diminished.