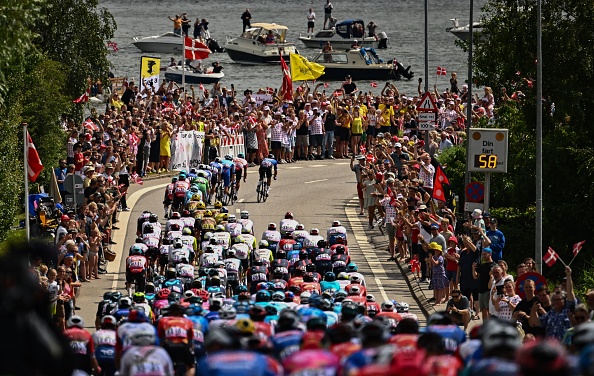 How can it have taken this long for the Tour de France to visit Denmark? This was a question posed many times before the Danish Grand Départ had got under way and the last three days must have had every cycling fan asking the same question on numerous occasions given what we’ve all witnessed.

Everyone will have their own favourite moments. Mine include the fans packed into an underpass on the Copenhagen time trial course chanting Jonas Vingegaard’s name, the noise and acclaim absolutely spine-tingling as it rose to crescendo at the moment the Jumbo-Visma rider powered through, a streak of colour in the semi-darkness. Then there was the moment on Stage two when the peloton passed a pack of fans wearing yellow and brandishing yellow wheels above their heads. Or the sight of riders sprinting up a rise with a huge bank of spectators filling the hillside above them like the Kop end at a football stadium.

At every turn there was something that caught your eye, the sea so frequently present, especially on the second stage into Nyborg that concluded with the quite unforgettable passage over the Great Belt Bridge. There were images that highlighted the traditional image of Denmark, soon followed by shots of extraordinary architecture, the pick of it for me the CopenHill power plant in the Danish capital that incorporates a 500-metre-long ski slope and the world’s largest artificial climbing wall.

Like the commentators on French TV, Denmark’s Grand Départ brought back so many memories of the 2014 Grand Départ in my home county of Yorkshire. The turn-out on the roadsides were just as staggering, and the crowds equally enthusiastic and orderly. Coming on the back of the 2012 London Olympics, Yorkshire’s hosting of the Tour led to an upsurge in interest and participation in bike racing, and I would expect Denmark to experience a similar effect, especially given the way their riders have performed over the last three days.

Mads Pedersen and Jonas Vingegaard finished well up in the top 10 in the Copenhagen time trial on day one. Magnus Cort wasn’t far behind them and has been the standout performer of this weekend, taking the polka-dot jersey on Saturday by leading over all three fourth-category climbs, then squeezing absolutely every little drop of enjoyment he could out of a solo Sunday afternoon ride that took him over three more hills to the ecstatic acclaim of hundreds of thousands at the roadside. Cort’s ride was the epitome of cycling as pleasure. Mention should be made too of Mikkel Honoré, who seemed to fill every gap when Quick-Step needed it, and to Mikkel Bjerg for shepherding defending champion Tadej Pogačar through the mayhem pretty much unscathed.

Although the action on the road rarely justified the reception the fans offered, the Tour will head into its fourth stage in much better shape than it was coming out of last year’s crash-hit Grand Départ in Brittany. There have been a few tumbles but the peloton is still complete as it heads for France. What’s more, all of the GC favourites managed to avoid the few traps that did catch riders out and are closely grouped towards the top of the classification.

Tak, Danmark! You were wonderful.