When the Tour comes to town 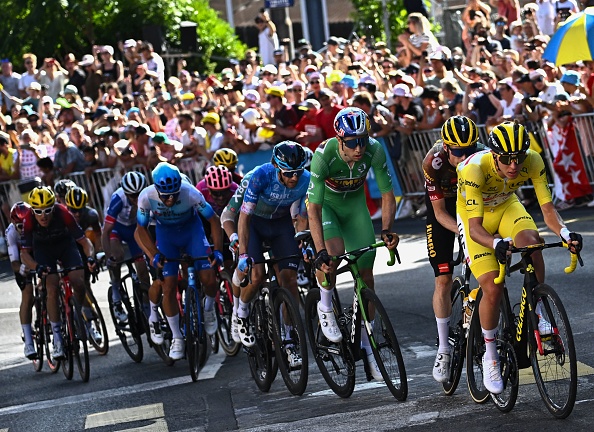 It’s not often these days that I drive on the route of a Tour de France stage. In pre-internet days, it used to be a useful, even vital, part of a Tour day, a chance to get some first-hand insight into the route beyond the few details that were available in the race roadbook, to get a clear idea of what climbs were like, to witness the landscape, to add some colour to the race reports and features that you’d be filing days or even weeks later.

In the modern era, there’s so much information available about the vital statistics of race routes, the terrain, the way that the weather might affect the racing, that travelling the length or even part of a Tour stage becomes irrelevant. Add in the fact that news stories now have to be filed almost as soon as they’re out of the mouth of riders, team directors or expert race watchers, and the journalist’s first instinct is to head straight for the autoroute and leg it to the finish as soon as they can.

Yet, the occasional venture back on to the route of a Tour stage, even if only brief, remains a hugely rewarding experience as a reminder of what this great race is and what it means to the hundreds of thousands of fans thronging the roadsides. Having gone off-course on the way into Lausanne from what’s known as the hors course (off-course) route that enables the Tour followers, the media especially, to transfer as quickly from the stage start to the finish, we ended up driving the final 15 kilometres of the race route.

Doing so is a privilege, and one that allowed us today to escape from the snarled-up traffic that was rapidly clogging every route in and out of the Swiss city three hours before the race was due to arrive. The locals will have known for months that the Tour was coming to town today, but it didn’t appear to stop them from trying to go about their business, apparently unaware that the biggest annual sporting event on the planet is always likely to result in traffic chaos.

Having negotiated for several minutes with two Swiss gendarmes who weren’t sure whether they were authorised to remove the barrier between us and the route, their Chief gave them the OK and we slipped onto the route 15 kilometres from the finish, just a few minutes ahead of the publicity caravan.

The size and enthusiasm of the crowds immediately catches your attention. Kids and adults waved with delight, even at our bright red Ford Kuga that had nothing to mark it out as special beyond the “PRESSE” sticker across the top of the windscreen. I always find myself swept up by this fervour, and gleefully wave back. It’s as if we’re all in some kind of big secret. “Hush, don’t tell anyone, but the Tour is coming by in a bit!”

Interspersed with this are moments of fear. Sometimes the crowds are so large, or the attention of fans has dropped to such an extent that you’re afraid for their safety, especially when you’re driving. The Tour operates on roads that are closed hours before the riders hurtle across them, so the hundreds of vehicles travelling ahead of the peloton don’t stop for traffic lights, pedestrian crossings, for anything unless a gendarme signals for them to do so.

In the final five kilometres, as the road climbed up through Lausanne, the crowds were immense and it is spine-tingling driving between them. It’s on stretches like these; usually on climbs and passes, that travelling the route still pays dividends. You can look at them on VeloViewer or Street Map and get an impression, even a 3-D one, but the combination of audience and gradient can’t properly be captured unless you see it for yourself. Fans change climbs, in Lausanne’s case, adding vibrancy and colour to the backdrop of shops, office blocks and grandiose council buildings.

You get a much better sense of the shape of the climb, where the attacks might happen, where the gradient flattens before pitching up again, how the winning moves might be made – a van Aert’s-eye view if you like. And when you’re sitting in the press room, watching it on TV, those final 15 kilometres do have more significance. You remember the little girl with the “Allez Thibaut” sign, the bank of fans on a corner all decked out in red polka dots, and you’re reminded what a unique and remarkable event the Tour de France is.