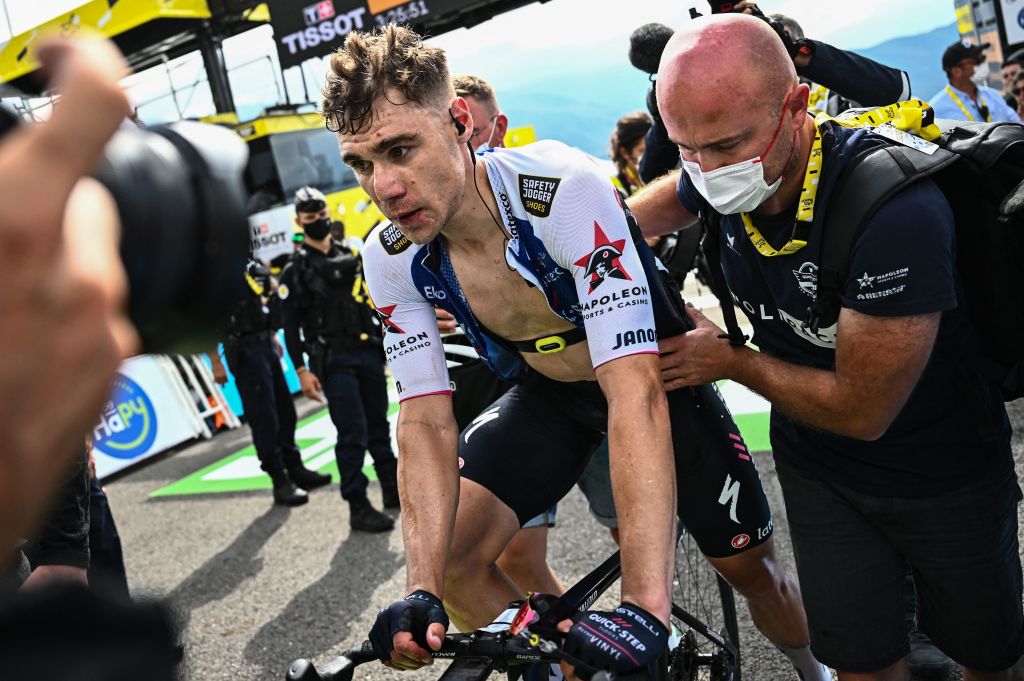 Fabio Jakobsen finished last on Stage 17 - but his exhausted sprint to beat the time limit was almost as inspiring as his Stage 2 victory. (Getty Images)
Wednesday 20th July 2022
Share

After Michael Mørkøv in Carcassonne and Marc Soler in Foix, Stage 17 saw another solo rider engaged in a cycling Calvary, battling bodily weakness and the terrain to finish inside the time limit.

Coming onto the altiport at Peyragudes, its 300-metre final straight more like a ski jump than a runway, Fabio Jakobsen looked destined to miss the time cut, his chance of adding to his stage win on day two in Nyborg seemingly gone. Yet, shouted on by teammates and staff from his QuickStep-Alpha Vinyl team, standing just beyond the finish line, the Dutchman somehow wrenched one of the sprints of his life from within. Straining with everything he had left, Jakobsen crossed the line and promptly collapsed against the barriers, where he was eased off his bike and onto the ground by his colleagues.

He’d fended off the chronometric Charon by 15 seconds. Jakobsen will, of course, have to negotiate a similar test but over bigger passes on Thursday before he can consider a return to his preferred terrain in Cahors on Friday and on the Champs-Élysées on Sunday, which is arguably the most prestigious prize in cycling for a sprinter. However, no matter what fate awaits him at Hautacam, his ride highlighted some significant facets of athletic performance and of cycle sport. From a physiological point of view, Jakobsen illustrated how athletes, or indeed any of us, tend to have the ability to extract some extra internal resource even when it appears that we’ve reached our limit.

It might come at a finish line, at the top of a hill, into a block headwind. It’s so often there, like a reserve tank of fuel that enables you to achieve your immediate goal. Jakobsen tapped into his on that runway. His solo toiling also underlined the suffering that has to be endured by the riders during the race and its fetish-like attraction for spectators.

Most of us wouldn’t want to put ourselves through what they do, but we relish the fact that they do, or at least we do when they emerge intact and ready for the next challenge. These performances are often every bit as good as a victory for us, while for the athlete they’re an essential hurdle that has to be crossed before they get the chance to fight for an authentic triumph.

At the same time, though, Jakobsen’s struggle at Peyragudes sheds light once again on the issue of how drafting behind motorised vehicles warps the competitive reality during major races, and particularly during the Tour when there are so many cars and motorbikes in the race. While the Pogačars, Vingegaards and Thomases get a benefit from the TV bikes and photographers riding ahead of them, slightly reducing the drag that would otherwise restrain them, the Jakobsens in the gruppetto don’t get any such assistance.

In his recent autobiography Tour de Force, Mark Cavendish said that the power levels he now needs to sustain in the mountains at the Tour de France are 20-25 percent higher than they were when he first appeared in the race back a decade-and-a-half ago. Back then, he expected to average 280 watts on a big climb. Last year, he needed to put out 340-360 watts, and even 380 on occasions.

While he acknowledged that performance levels have risen, Cavendish asserted that the fact that the riders at the front of the race were in the lea of motorbikes during every part of a mountain stage means that the gains that the gruppetto could once count on making on descents and in the valleys have been lost. As a consequence, the riders at the back end of the race are engaged in an uneven contest, the equivalent of a boxing match where they’ve got one hand tied behind their back.

Solutions to this distortion of competitive fairness aren’t obvious. The easiest to implement would be an extension of time limits on mountain stages, which could offset the drafting gains unwittingly obtained – although sometimes less so – by the riders that are the focus for TV and photographers. Having fewer motorbikes and cars in the race convoy could help too, although the reduction would be minimal until some alternative, reliable and safe solution for broadcasting race action could be obtained.

In the meantime, let’s hope that Fabio Jakobsen gets the replenishment and rest that he needs to get through his final test by high mountain at Hautacam on Thursday. The sprinters have had few opportunities in this race so far, and it’s perverse that so often when we have seen them they’ve been suffering rather than strutting.