Relegation: the word haunting some of the Tour’s top teams 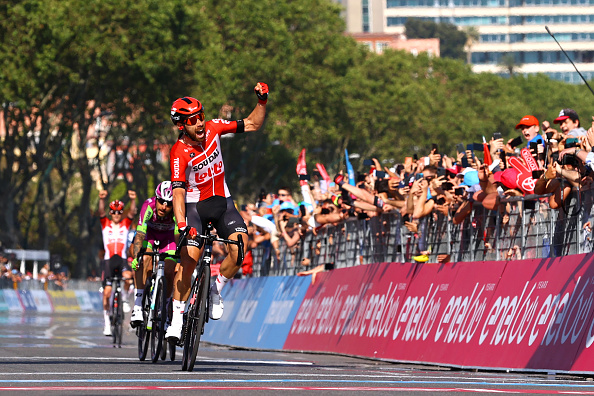 One of my sporting highlights of this year so far came just over a month ago when, thanks to what still seems like a freak change in fortunes and form, Leeds United managed to avoid relegation from the Premier League thanks to a last-minute goal in the very last game of the season, which meant that Burnley rather than Mighty Whites will be playing the second tier of the English football league next season.

Moments like this will be familiar to all football fans and those in many others sports too, especially those who support teams whose fate fluctuates like those of Leeds. Promotion/relegation ensures that the teams at the top of a table not only have something to play for, a title to chase, but that those at the bottom do as well. For them, survival is a victory, relegation is a crushing defeat that bears on clubs and their fans until the following season and hope returns with the prospect of promotion.

There has often been talk about introducing a similar system within cycling, Tour organisers ASO among those keen to push these discussions along in order to provide clarity when it came to the selection of “wild card” places in Grand Tours and the Classics. Yet the UCI had always knocked down suggestions that promotion/relegation should be introduced, arguing that teams needed to be on a firm financial and sporting footing before this could be considered.

Change came, though, towards the end of 2018, when UCI president David Lappartient announced a fundamental restructure of men’s professional road racing, which came into force on 1 January 2020. It featured yet another reworking of the calendar and recategorisation of its races, the implementation of automatic wild card places for the two leading ProTeams into WorldTour events, and the allocation of WorldTour licences for three-year periods.

As part of the latter, the UCI added a “sporting criterion” to the financial, organisational/administrative and ethical (?) requirements for teams seeking WorldTour status, to become what were now known as WorldTeams. This set out that the UCI points collected over three seasons and the consequent team rankings would establish a hierarchy of 18 teams, which would then be considered for WorldTeam licences for the 2023-25 period. In other words, assuming that there were more than 18 teams interested in securing a WorldTeam licence, elite level men’s cycling now had a promotion/relegation system in place between its top two divisions – WorldTeam and ProTeam.

The battle to secure these 18 WorldTour places is now into its third and final season, and, like any relegation battle, the nearer the conclusion, the more focus there is on it. As things stand with the start of the Tour de France just a week away, the two WorldTour teams facing “the drop” are Israel-PremierTech and Lotto-Soudal (see Lanterne Rouge’s excellent daily relegation tracker below), with Alpecin-Fenix and Arkéa-Samsic the teams set to replace them in the top flight. Yet, the teams in 15th-18th places – Cofidis, Movistar, EF Education Easy Post and BikeExchange-Jayco – are still very much in the danger zone. So far, so straightforward. However, unlike a football team’s fight against relegation, in which they would earn one point for a draw, three for a win, and it’s extremely easy to see how the contest is unfolding, cycling fans need to juggle a strong grasp of maths, precise knowledge of the individual rider rankings – that means the points totals of between 500-600 racers – and, most vitally, be extremely familiar with the points allocation for the three levels of UCI events that are open to WorldTour riders. In other words, it’s not a contest that designed for the enjoyment of most fans. What’s more – and a lot of fans won’t be too surprised about this – the UCI’s points system is so uneven in its allocation of points that in many cases it makes sense for teams to send their most prolific and high-profile riders to smaller races rather than to a major event like the Tour de France or Giro d’Italia.

Lanterne Rouge highlights this perfectly, explaining: “The actual point allocation per race is also counter-intuitive, with one-day races receiving a heavy weighting of points compared to stages in stage races. For example, a UCI 1.1 race such as Clásica Jaén gives 40 points for 6th place whilst a Tour de France 6th place in a stage gives none.”

Calculations of the winners and losers in this Mensa-level game of snakes and ladders are made even more complicated by the fact that each team’s points totals are based on the points won by just their top 10 riders. Lanterne Rouge offers an example of how this turns an extraordinarily complex even more byzantine by detailing how Thomas De Gendt’s stage win at the Giro, for which he earned 100 points, only boosted Lotto-Soudal’s total by a mere five. That victory made De Gendt Lotto’s 10th-highest rider in the individual rankings, but only put him five points ahead of teammate Florian Vermeersch, who had previously held that place.

There are though, a few certainties about the WorldTeam relegation fight:

1 We’re all going to hear a lot about it during the Tour de France;

2 Riders and staff on the relegation-threatened teams will do a lot of complaining about it;

3 David Lappartient will assert it’s for the good of the sport.

What’s also certain is that relegation-threatened teams are picking Tour line-ups designed with the greatest potential for earning points. Lotto will go in strongly behind sprinter Caleb Ewan, but have a whole string of stage-hunters eager to be let off the leash, including Philippe Gilbert, Brent Van Moer, Tim Wellens and the aforesaid Vermeersch. Israel are following a similar strategy, leaning on Mike Woods, Simon Clarke, Daryl Impey and, perhaps surprisingly, Chris Froome.

We can expect other teams to do the same, and it could lead to some interesting tactics. One relegation-threatened team leading the bunch behind a break that contains a member of a rival squad, for instance? Or riders from the same team contesting the same sprint, in order to boost their points allocation? Perhaps even alliances being formed between GC teams and relegation teams, where the latter helps out the former on key stages, and gets payback in being able to go for points on other days?

Straightforward, it isn’t. It’s labyrinthe, byzantine, relegation time. Have your calculators at the ready…