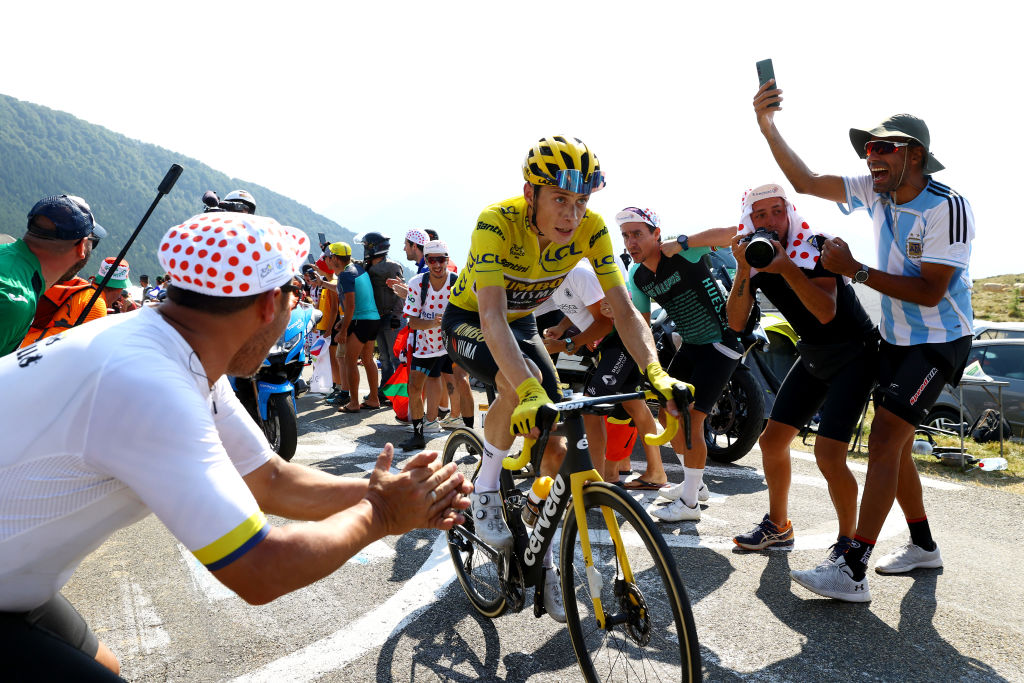 The Pyrenees have been good to Danes, with Bjarne Riis winning in yellow in 1996 and Michael Rasmussen winning in the maillot jaune on the Aubisque-Gourette finish 11 years later. Both those wins were subsequently tarnished by doping confessions, but Rasmussen, now working on the Tour for the Danish media, hopes Jonas Vingegaard’s success can leave the past behind.

Standing outside the sweltering press room, below the Hautacam finish line, Michael Rasmussen, yellow jersey in 2007 until he was withdrawn by his own team for lying about his whereabouts, is both reflective and a little proud of what Jonas Vingegaard, now only three days from Paris, has achieved.

“I’m really, really pleased for Jonas,” Rasmussen said. “I think that’s the way that the Tour should be won, winning the Queen stage on the last big mountain, in the yellow jersey. It just proves that he is the rightful owner of that jersey.”

As pleased as he may have been for his fellow Dane, he was also critical of his rival, defending champion Tadej Pogačar and also unsurprised that the Slovenian lost more time on the Tour’s final mountain finish.

“Pogačar, when he has something extra, which obviously he didn’t, then he’s going to spend it, but he did not have that extra to make the difference. If he had, he would have done it on Tuesday or Wednesday, but he was never able to get rid of Jonas. He tried with everything he had, but it wasn’t enough. He even tried on the descents, which almost cost them both.”

It’s 26 years since Riis took an extraordinary solo win on Hautacam, crushing all before him. That stage win, the foundation of his Tour victory in 1996, has long since been tarnished by the soap opera of doping confessionals that followed Riis in the intervening years.

Rasmussen remembers that win as “one of the most memorable days in Danish cycling, when Bjarne won in the yellow jersey”.

“That was repeated, in some ways, 11 years later, when I did pretty much the same thing [on Aubisque]. I just hope that Jonas will be able to carry this one all the way to Paris.”

Does Rasmussen think that Vingegaard’s success will be enough to lay past ghosts? “You have to separate the past from the present,” he says. “Every era had their heroes under the conditions of the time. Hopefully, Jonas’s cycling career will have a different ending to Bjarne’s and mine. I think we can expect a lot of Danes in Paris on Sunday. The whole country is going nuts…!”

As for Riis’s reaction to Vingegaard’s success, Rasmussen was dismissive. “I don’t talk to Bjarne. I saw a very recent interview and he obviously is very proud of what he did in 1996. He doesn’t feel any remorse about that, even though he has said so at certain points.”

But he added, “It’s been 15 years since I won on the Aubisque, in yellow! And many of the people who saw this race today were not even born in 1996, including Jonas. You’ve got to be 30, or 35 years old, to even remember what happened.”

One thing that Rasmussen is certain about is that the Jumbo-Visma rider won’t let success go to his head. “He’s not going to start living in Monaco, buying Ferraris. I can’t see that happening. He came across the finish at Hautacam and jumped on his time trial bike.”

“He’s been second, he’s been first and he’s only 26. A year ago everybody would have said: ‘No, there is Pogačar, he’s going to win for the next seven years,’ but it doesn’t turn out that way. We said the same thing about Egan Bernal, a few years ago, but there’s always the next guy coming up.”

“But I think you can predict that Pogačar and Jonas will be there for a while now,” he said. “I also think that Pogačar needs to re-think his schedule and not necessarily try to be the world’s strongest rider from January until October.”