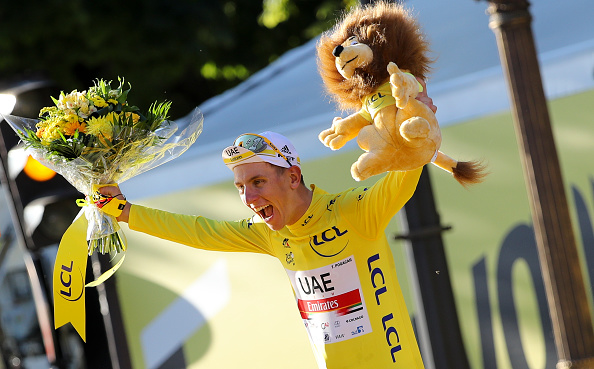 What a difference a few days make… not quite 24 little hours perhaps, but the turn of events in the peloton in recent days was enough to quickly reverse the thinking of the previous weekend, at which Jumbo-Visma dominated the Criterium du Dauphiné in the French Alps.

A few days ago, any Tour build-up stories were all “who can stop Jumbo’s double leadership play…?”

By the end of the week, it was all about Tadej Pogačar, after the Dutch team withdrew en masse from the Tour of Switzerland due to a Covid outbreak, as did Adam Yates, thus derailing Ineos Grenadiers’ Tour preparations. Meanwhile in Slovenia, Pogacar’s UAE Team Emirates team ran riot.

Pogačar’s show of power in the first stage of his home nation race put the achievements of others into context and sent a collective shudder through his rivals as they prepared for the Grand Départ of the 2022 Tour de France in Copenhagen in two weeks.

The double Tour champion says he is “stronger, leaner, more confident”, and has now also developed such super powers that he will be starring in the next movie in the Avengers franchise. Well, maybe that last bit is a slight exaggeration, but as he cruised clear of the peloton in the thrumming heat of the Slovenian afternoon, on the very first stage of his national tour, reality bit his rivals, hard.

Jumbo-Visma, led by Primož Roglič and Jonas Vingegaard, still remain the biggest threat to a third yellow jersey in Paris for Pogačar, but the events of the last few days have put the scale of the task into context. If anything, the two-time Tour winner looks even sharper than in past years, capable of accelerating away from his rivals at will on the climbs.

If Yates struggles to recover in time for the Tour, then, with Richard Carapaz expected to ride the Vuelta a España, the burden of expectation will shift to the shoulders of Ineos teammates Dani Martínez and former Tour champion Geraint Thomas.

The Welshman hinted at his best form when he was fourth in the fifth stage of the Swiss race, which was won by Aleksandr Vlasov, of Bora-Hansgrohe, who are increasingly looking a force to be reckoned with, particularly after Jai Hindley’s recent Giro d’Italia victory.

Jumbo-Visma meanwhile, may have to shuffle their pack, given that four of the team racing in Switzerland were said to have tested positive for Covid. Ineos will remain as bullish as ever, but Yates’s illness will be a blow. At the moment then, with two weeks to go, events seem to be following a familiar path. It’s very much advantage Pogačar.