“It was a shit day for us” says Jumbo DS Niermann 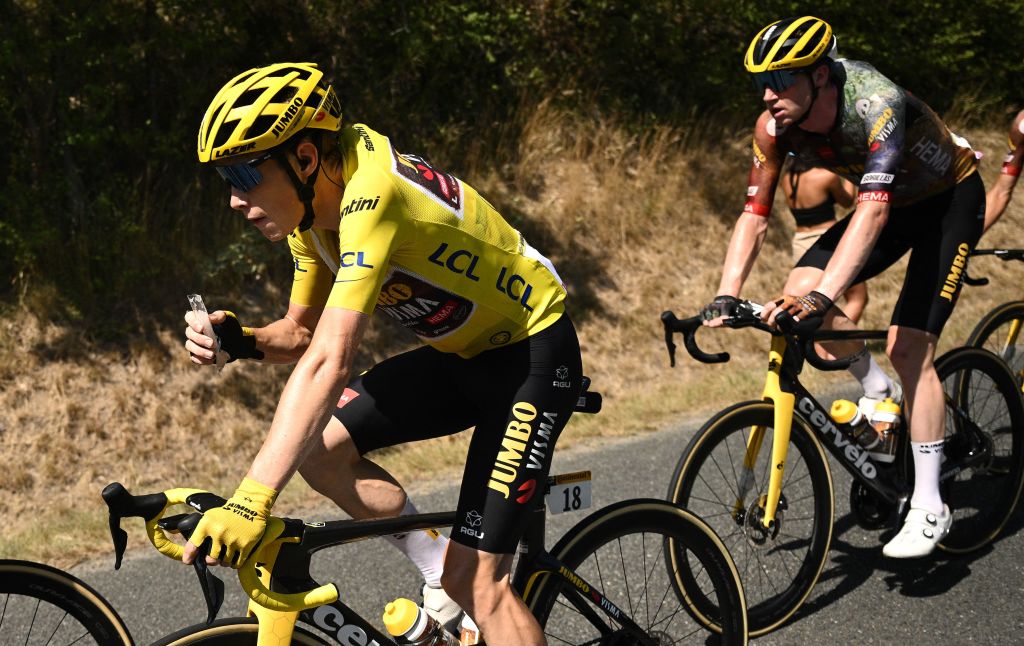 Six each. That’s the number of riders that UAE Team Emirates and Jumbo-Visma will now both have going into the three Pyrenean stages that follow the rest day as a result of Primož Roglič not starting stage 15 to Carcassonne and Steven Kruijswijk failing to finish it after he crashed and sustained what’s believed to be a broken collar-bone.

“It was a shit day for us,” said Jumbo coach and directeur sportif Grischa Niermann soon after the finish, where Alpecin’s Jasper Philipsen just edged out Jumbo’s Wout van Aert for the day’s spoils. Niermann said he had yet to find out the extent of the injuries that Jumbo’s race leader Jonas Vingegaard and domestique Tiesj Benoot suffered just minutes after Kruijswijk went down, but added that first indications were that the pair were relatively unscathed.

“When Steven Kruijswijk crashed it was immediately clear that he wouldn’t continue as he fell hard on his shoulder, and then we jumped in the car to continue to chase the peloton and, just when we arrived, Jonas and Tiesj were on the ground. So everybody on the team waited for them and then they got dropped trying back to bring Jonas back to the peloton,” explained Niermann.

Speaking in his press conference a few moments later, Jumbo’s race leader Jonas Vingegaard confirmed that he’d avoided any serious damage. “I’m OK, I’ve some road rash down my left side. I went down but quickly got up again. I feel a bit sore, but that’s how it is after a crash,” said the yellow jersey, who didn’t know what had caused the crash, only that Benoot went down in front of him.

Niermann said that the only good thing about the stage was the fact that it came before the third and final rest day, giving the Dutch team a chance to lick its wounds and decide on how the loss of two of its very best climbers should be accommodated tactically. It will surely bring a change to the approach they’ve hitherto adopted.

The Carcassonne stage gave the latest example of this. It began with Jumbo’s latest demonstration of their intent to win both the overall and points titles. After the initial flurry of attacks from the start, the green jersey of van Aert emerged in the breakaway along with Mikkel Honoré and Nils Politt. In what was effectively a rerun of their tactic from stage six into Longwy when van Aert also ended up in a three-man escape, Jumbo wanted the stage to go to a sprint, but didn’t want to control the peloton.

“We said that Wout would look out for groups at the beginning of the stage, but there were only three in it. And, of course, he’s not going to ride in front of the peloton in a group of three guys the whole day, so he waited for the peloton,” Niermann explained. On the road to Longwy, of course, van Aert did continue with his effort in a group of three, ultimately in vain, losing the yellow jersey in the process.

Two weeks and a weekend into the Tour, Jumbo have taken a firm grip on the yellow and green jerseys, and have almost a winning position in the latter. Van Aert’s lead in the points competition is 196 points, and that’s over Tadej Pogačar, who’s not a direct rival for this title. In short, van Aert would probably claim the green jersey in Paris even if he weren’t to win any more points at all, which won’t be the case of course.

Niermann didn’t suggest there would be a chance of plan, likely to a more defensive strategy, but it would be a surprise if van Aert’s freedom to roam will be extended into the Pyrenees. After specialist climber Sepp Kuss, the multi-skilled Belgian is now the best of the rest of the domestiques in the mountains, and Vingegaard will need to lean him on him more than ever.

Asked if the loss of Roglič and Kruijswijk had evened things up with UAE, Niermann stated, “I think we still have the upper hand because we have the yellow jersey.” But now, like UAE, they will surely have to place their full focus on it. They can’t afford another “shit” day.