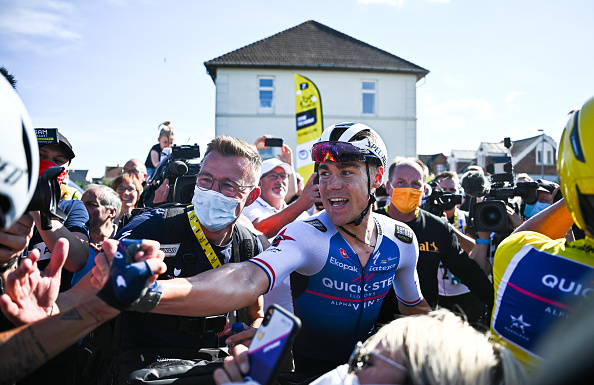 In common, I suspect, with most fans of bike racing, the one rider I really wanted to see win a stage on this Tour de France was Fabio Jakobsen. In his post-stage interview after his final blistering burst of acceleration sent him barrelling past Wout van Aert and Mads Pedersen to win the opening road stage in Nyborg, Jakobsen spoke of having a “second life”, which began when he suffered what were almost fatal injuries in a very high-speed crash at the Tour of Poland two years ago.

There were fears that the young Dutchman might never race again. After a string of operations, he was able to start gentle training towards the end of 2020 and made his return to racing in April 2021 at the Tour of Turkey. With him on the Quick-Step team there was Mark Cavendish, who had himself battled back from debilitating illness and was looking for his first victory for three seasons.

Cav got his long-awaited success on day two, then added two more on the subsequent stages. The second of those, at Kemer, was particularly significant as it was the first time that Jakobsen was able to contribute to the Briton’s lead-out. “I’d sat on his wheel, watching the way he surfed and swaying through the corners and gaps. Yep, he’s a sprinter, all right. This is easy, I thought to myself. It was like riding a magic carpet,” Cavendish wrote in Tour de Force, his third autobiography, released at the end of last season after he’d gone on to win four stages and the green jersey at the Tour de France.

In the next line, the Manxman added: “Fabio will probably become the dominant sprinter of his generation”. The journey to that honorary title, which now appears to be his following 11 victories this season including the success in Nyborg on his first-ever Tour de France road stage, built up like a bunch sprint lead-out.

Initially, his progress appeared quite slow. Getting back to racing form was the first step. Once achieved, the next was being able to contribute to the successes of other riders on the Quick-Step team, including Cavendish that day in Kemer. Less than two months later, on the third stage of the Critérium du Dauphiné into Saint-Haon-le-Vieux, Jakobsen decided his form and the route profile had combined to offer him the first chance since that life-changing day in Poland of being led out in a bunch sprint.

A kilometre from the line, as the road began to climb, Jakobsen began to lose ground and finished 86th. But he had a huge smile on his face as he crossed the finish line. He’d felt the buzz, the adrenalin rush once again he told the press. He knew he still had what it takes to get and keep yourself into position in a sprint. He hadn’t lost his nerve at all. What was lacking now was endurance and finishing speed.

His progress began to quicken up. The first demonstration that his speed had returned came just over a month later, when he won two stages at the Tour de Wallonie. From there, he galloped on to the Vuelta a España, where the wins kept coming. He took three and wrapped up the points classification into the bargain.

Coming into this season, Quick-Step team boss Patrick Lefevere confirmed that Jakobsen would start at the Tour in preference to Cavendish, and at every turn he kept reaffirming the Dutchman would get his chance this July. Since then, Jakobsen has provided plenty of evidence to support Lefevere’s decision. He’s won at least once stage in every one of the six stage races he’s started this season, that final surge in Nyborg keeping that run going.

Listening to Jakobsen speak in the aftermath of some of those moments, it’s impossible not to be drawn to him. He’s a very warm, open personality, very insightful when it comes to talking about the sport, not one to duck a question, even when he gets asked about that crash in Poland for the nth time. He’s so bloody nice that you want him to do well, and I, like many others, shouted with delight when he first shrugged off Peter Sagan’s brazen attempt to rough him up and then burst through to win.

Fabio cried. I cried. It was a magnificent day.