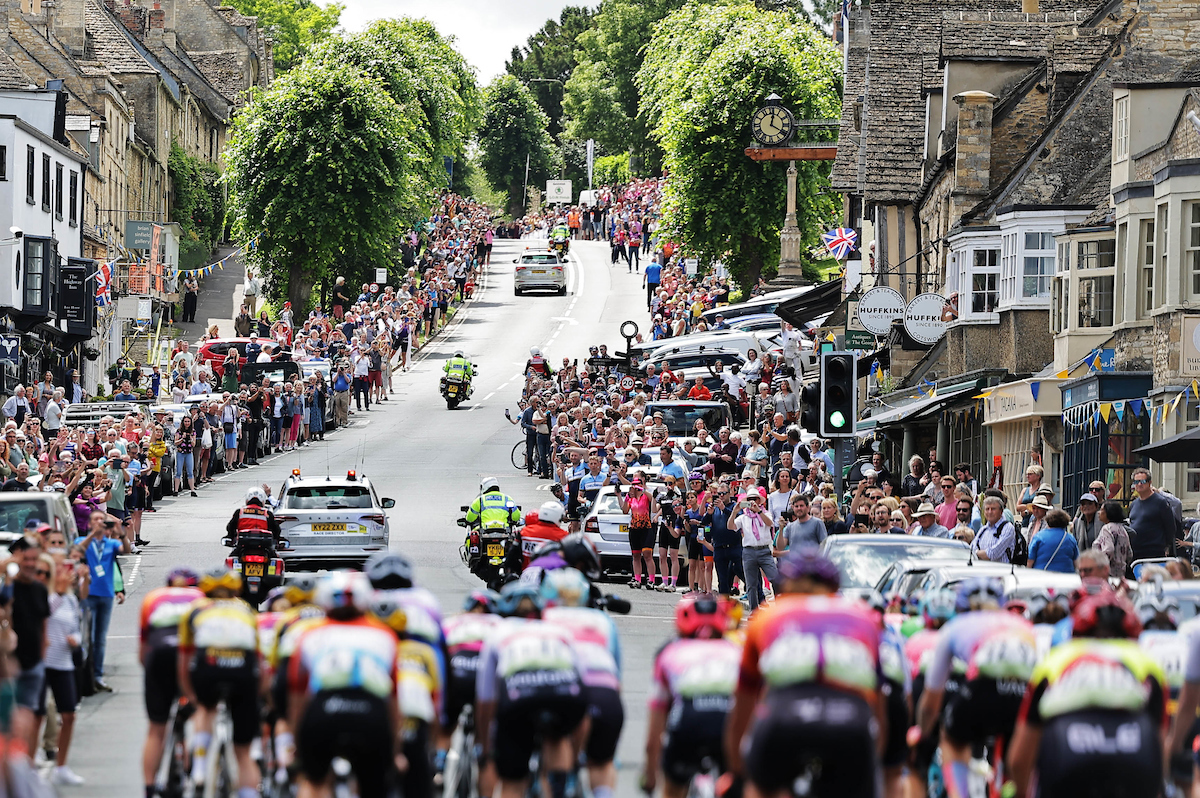 A great news photo tells you almost everything about a story at a glance, without even having to read the words around it in some cases. This image, which has been circulating widely on socials since the final day of the Women’s Tour, captures in an instant the popular fervour that was generated by the British race, crowds several deep lining the historic and beautiful main street through the Cotswolds town of Burford.

It was taken by Alex Whitehead, an award-winning photographer with Yorkshire-based Swpix.com, an agency that has a regular habit of delivering the spectacular – Alex’s image of Patrick Eenkhoorn handing his bidon to a young fan riding up the pavement at last year’s Tour of Britain springs immediately to mind, as does Alex Broadway’s pic of Dimension Data’s Nic Dlamini leading the 2019 Tour of Britain bunch over the rain-drenched box girder bridge across the River Ouse.

What’s so magical about the Burford image is that it’s saying a lot more than simply “Look at the size of the crowds watching the Women’s Tour”. It also illustrates the burgeoning popularity of women’s racing as a whole, as Ellen van Dijck and other riders have highlighted. Put a good show on, and people will come to see it. Fundamental to this, though, is the need to create awareness of it happening and making it visible, as the Women’s Tour organisers did by prioritising investment in live broadcasting, thereby boosting its audience hugely.

Three days on from the British event, the first edition of the Mont Ventoux Dénivelé Challenge offered further evidence of this upward trend. The images as Marta Cavalli, one of the break-out stars of this season, rode solo towards the summit of Mont Ventoux were mesmerising, and her success on the “Giant of Provence”, one of the sport’s most iconic locations, will stick long in the memory.

As the Italian was climbing towards victory, it struck me that the last time the Ventoux featured in a women’s race was probably the 2006 edition of the Grande Boucle Féminine, one of the later and – for the media and, therefore, most fans – almost invisible iterations of the original Tour de France Féminine. Nicole Cooke was the solo victor that day, although you’d be hard pressed to find any images at all of the Briton’s success. Her success has been reduced to little more than a line on historical websites, and the contrast with the coverage of Cavalli’s win on the same mountain and with that image from Burford is extremely stark.

I was reminded of the near invisibility of women’s racing in the decades either side of the millennium while I was researching and writing my newly published book Climbers, which examines our obsession with the mountains and the riders who thrive in that majestic but unforgiving terrain. It was rarely hard to find pictures and footage of the great climbers on the men’s side of the sport. At the same time, it was rarely easy to track down still and TV footage of the great women climbers, particularly after ASO pulled its backing from the Tour de France Féminine – of the Tour of the EEC as it had become – in 1992. Great climbers such as Fabiana Luperini, Joane Somarriba, Nicole Brändli, Edita Pučinskaitė and, of course, Cooke performed in what was essentially a void.

Over the past decade, change has come, steadily at first, then more quickly over the last two or three years. The Burford image captured this new vitality perfectly, as did the coverage of Cavalli conquering the Ventoux. The Italian and so many of her peers are instantly recognisable, their exploits enthusiastically followed. While this evolution of women’s racing still has a good way to go, late July’s relaunched/newly created (depending on how you see it) Tour de France Femmes avec Zwift looks almost certain to add to the momentum, showcasing the established stars to a wider audience and, as the Tour always does, highlighting new ones.

I’m relishing the prospect of those eight days of racing and would argue that they’re the most important of the season. There’ll be many more images like Burford, more feats to cheer like Marta Cavalli’s on the Ventoux, and cycling will be richer for them.