Gastro guide to the Tour: Stage 15, Rodez to Carcassonne 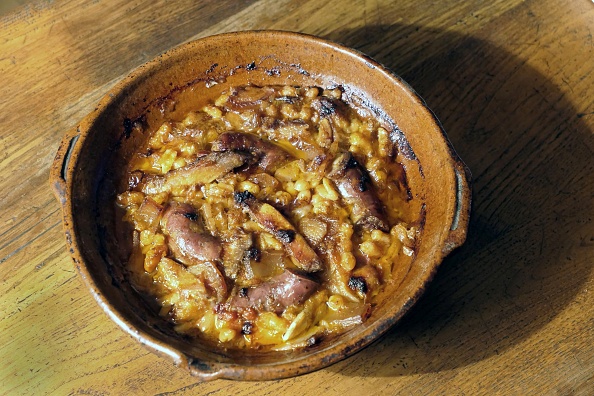 Cassoulet, in this case the Toulouse version of the dish - pic by Getty Images
Sunday 17th July 2022
Share

Starting in Rodez, the administrative centre of the department of Aveyron, stage 15 runs south and west, clipping the western end of the Montagne Noire near Revel and then taking in some more gentle rolls into the department of Aude and the finish in Carcassonne.

A dish that features on almost every menu in the Aveyron are farçous, which are small omelette-like patties. Although minced pork is sometimes included, the local style is veggie, using chard or spinach and lots of herbs, typically chives and parsley. Aveyron’s second biggest cheese in terms of production after Roquefort is vieux Rodez. A hard, yellow cow’s cheese that’s similar to parmesan, but with a stronger, more salty taste, it’s often grated onto soups, salads and pasta.

Rodez’s most emblematic dish is the mandarelle, a cake that has the same rose-like design as the stained-glass window on the front façade of the cathedral that dominates the town. They’re made with caramelised apples and hazelnuts, sweet chestnut cream and flour. The cake’s name, incidentally, comes from the mandarelle bell that is set in a small bell-tower located on the cathedral’s roof above the point where the nave and transept meet.

Travelling south, the race is soon back into wine country. The route passes to the east of Gaillac, one of France’s oldest wine-producing regions dating back to the Romans’ presence. The hills to the north-east of Carcassonne on the southern flank of the Montagne Noire produce Minervois wines. The predominant grape varieties for its reds, which make up most of the yield, are Grenache, Syrah and Mourvèdre. Its whites, once dismissed as no better than table wine, are earning higher ratings and popularity too as they become more complex and refined.

Right on Carcassonne’s western doorstep is the Malepère wine area. The name stems from the Occitan phrase male peyre, meaning bad stone, which described how the local sandstone would erode. Unlike wine-growing areas to the east, Malepère is affected by cooling weather systems that come in off the Atlantic, which tend to give its wines a more acidic edge. Their reputation is steadily rising, and its reds are often served as an accompaniment to the one dish that Carcassonne is principally associated with, cassoulet.

The cassoulet is the dish that this meat and bean stew is served in. Legend has it that it was invented during the Hundred Years War by soldiers besieged by English troops in the citadel at Castelnaudary. They collected together all of the supplies they had left and the stew was the result. Having eaten it, the legend continues, the French soldiers emerged from their fortress and drove the English away. It’s a great tale, but it’s precisely that. The English troops actually burned most of the town to the ground.

Although the most “authentic” cassoulet is said to be Castelnaudary’s, many towns and regions have their own take on it. All, though, have white beans as a central ingredient. The three most popular are Castelnaudary’s, which contains goose liver, pork shank and sausage, Carcassonne’s, which features some or all of these as well as mutton and occasionally partridge, and Toulouse’s, which contains duck and Toulouse sausage.