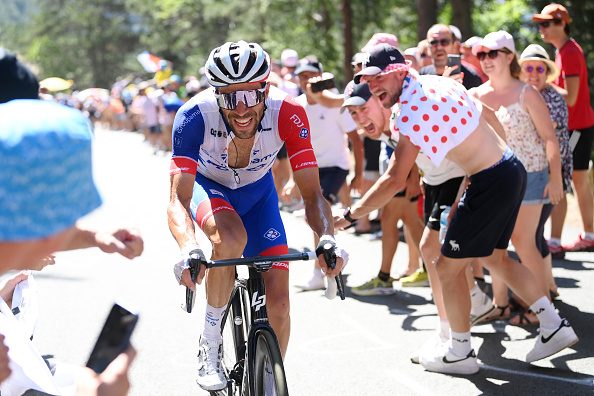 As Michael Matthews finally put paid to his long record of near-misses with a memorable lone win in Mende, ending years of disappointment, French riders in the Tour peloton were again empty-handed.

There’s little sign of the drought coming to an end, with only Thibaut Pinot, Romain Bardet and David Gaudu making much impact on the race so far. This is despite a significant number of French riders competing in this year’s Tour.

In fact, they are still forced to live in the shadow of Laurent Jalabert, a past winner on the climb to the clifftop aerodrome, now called ‘Montée Laurent Jalabert’ in the Tour’s road book, rather than Croix-Neuve, which is it’s non-Tour de France moniker.

Jalabert, of course, is now a celebrity, a salt-and-pepper TV pundit in a chauffeur-driven car, a man so well-liked in France that he is able to keep bars and restaurants open way beyond their usual hours. If you’re working on the Tour and looking for dinner late at night, find Jalabert and you know you’ll get fed.

But the inability of French riders to win a stage in this year’s race so far and the near-misses of Thibaut Pinot both in Châtel, where he lost out to Bob Jungels, and in Mende, where he was third, (just as he was in 2015, when Steve Cummings humbled both him and Romain Bardet), is telling.

There have been plenty of breakaway moves, but few going the distance with French riders in genuine contention for the stage. Warren Barguil and Bardet shone in the Alps, Pinot in the Valais, but other than that, there has been little for the home fans to shout about — other than re-living for the umpteenth time, Jaja’s big day out in Mende, almost 30 years ago.

Right now, the Tour misses Alaphilippe and so do the home fans. Instead it has been a steady stream of Danes that have taken most of the spoils. In Mende, it was the turn of an Australian who’d endured a degree of eye-rolling from some as he took yet more second, third or fourth places.

Matthews however was jubilant at his success, on a stage which he took by scruff of the neck and made his own. His win characterised resilience, self-belief and determination, with Matt White, his sports director calling it “the best win of his career.”

Meanwhile, TiboPino, as the French call him, took third, one place worse than he managed seven summers ago, when Steve Cummings dropped him and Bardet on the last downhill curves to win in Mende. At least Pinot was quicker through the final bend this time.