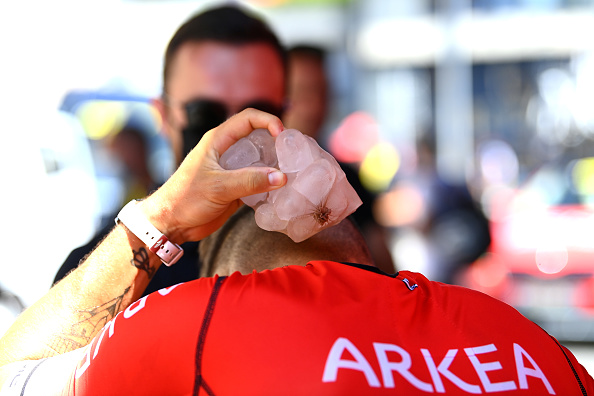 For Michael Mørkøv, stage 15 of this year’s Tour was a race too far. The QuickStep-AlphaVinyl rider found himself alone, far behind the peloton, and ultimately out of time as he rode into Carcassonne, over an hour behind stage winner, Jasper Philipsen. He was far from the only rider to struggle.

In the peloton itself, TV pictures showed a seemingly delirious Alexander Kristoff, mouth agape, soaked in sweat and water, fighting to hang on as the peloton sped into the finish. Fifty three riders contested the sprint — Kristoff fought back to get 13th on the stage — while Tom Pidcock made straight for the fountains opposite the Portail des Jacobins and doused himself in water.

In the nearby Parking Équipes, or team bus parking, backroom staff and sports directors sheltered under awnings or stood in the shadow of their bus, waiting for their riders to cross the finish line. Despite the invocation of the extreme weather protocol, shortly before the stage, with riders allowed to take feeds at will and the extension of the time limit, many had suffered.

Groupama FDJ sports director Philippe Mauduit was convinced that the intense heat had also diminished concentration levels in the peloton.

“I’m pretty sure that most of the crashes in the last hour, or hour and a half, were because the boys were losing concentration,” Mauduit said, “because of the tiredness, trying to get bottles, and ice and everything. They probably weren’t as hydrated as they should be and because of that, they lose concentration, touch wheels, and cause crashes. That’s a big probability.

“But this is how it is, this is cycling. Cycling exists outside other sports. If you want to make the race shorter, there is always someone to say ‘Come on! In my day we raced in this and that, blah blah blah…’ So it’s how it is. We try to keep our boys fresh and hydrated, we do the best to help them and after that we respect the rules that the UCI and the organisation make.”

Mauduit then pointed to the stage of June’s Route d’Occitanie that was curtailed to just 34 kilometres due to a heatwave, which was expected to peak at around 37 degrees. Sunday’s stage of the Tour nudged temperatures of 40 degrees in the last hour of racing.

“That was a few weeks ago, a few kilometres from here,” Mauduit said. “The local police decided to cancel the stage and told the organisers they couldn’t come through their region (because of the risk to the health of the riders and fans). But the Tour is the Tour — a big machine and the boys are just gladiators that we want to see bloody and suffering on the road.”

Monday’s rest day is very welcome, Mauduit said. “I think they will go to the pool tomorrow, maybe on the bike, but then the pool again. They need to recover.”

Others though, were not so sure, pointing out that long days racing in baking sunshine were part of the Tour. Asked if he thought that racing in such conditions was in any way dangerous or inhuman, Matt White was clear: “I don’t agree at all,” Team BikeExchange’s director said.

“The Tour Down Under is as hot as this for the whole race,” he said. “What are we going to do? Call the race off? Shorten the race? It’s summer and it’s hot. It’s brutal, I’m not arguing about that, but I just don’t think there’s anything you can do. They’re not racing in the Sahara.

“The UCI made special regulations today and made a compromise. There was no restrictions on where you could get water, so they made a good compromise and that’s it. I think they did enough today to make sure the riders got water and everything. It would be worse racing in the Tour of Langkawi in 33 degrees and humidity.

“It’s really hard to move a stage like that,” White said of suggestions that the stage could have been shortened. “In a perfect world, maybe. But it’s the Tour de France: towns have paid massive money to start the race and, even if you’re neutralising it, they’re still out in the heat anyway. But thank God for the rest day. They won’t be doing a long training ride, that’s for sure.”