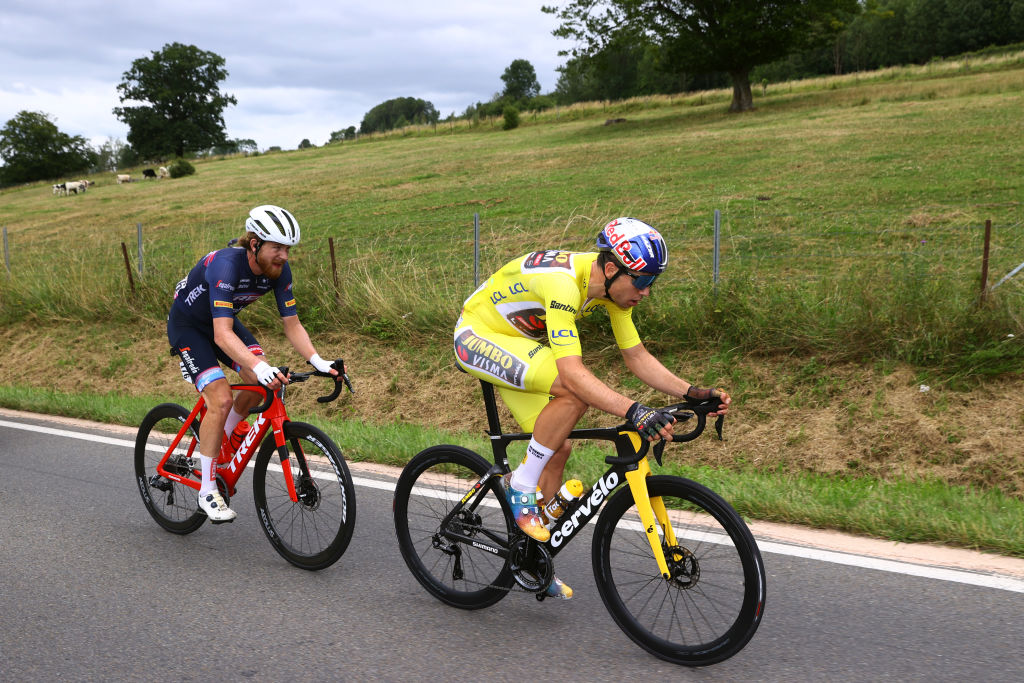 Wout Van Aert and Tadej Pogačar may have different skillsets but they’re the dominant riders in this year’s Tour.

On the eve of the first summit finish, at La Planche des Belles Filles, there are only two 30-somethings still in the top ten at this year’s Tour de France. Geraint Thomas at 36, is the elder statesman of the leading positions, backed up by the wine-loving Romain Bardet, at 31 years old, a 1990 vintage.

The rest of them are mere kids. Tom Pidcock, just 22 in fifth place, Neilson Powless, something of a revelation in second place and just 25, while the race leader himself, Tadej Pogačar – the new Cannibal – is still only 23.

Pidcock is riding his first Tour de France, Powless his second. Jonas Vingegaard is 25 and racing his second Tour, while Pogačar as you may know, has won two Tours already.

Of course experience may come to the fore in the coming days and with climbers like 32-year-old Nairo Quintana, 29-year-old Guillaume Martin, of Cofidis, and 37-year-old Jakob Fuglsang hovering as the race enters the Vosges, there is sure to be a reshuffle.

Not being edged out by anyone was Wout Van Aert who played a huge part in the Tour’s sixth stage, to Longwy, becoming the fifth fastest stage in history, with another mega-breakaway of 140 kilometres.

Van Aert’s move had an element of shock and awe. The shock came from his decision to attack at all, the awe from the metronomic speed he maintained for almost 140 kilometres.

“We are up against extra-terrestrials,” Cofidis rider Guillaume Martin said of Pogačar’s stage win and Van Aert’s attack. “They’re above everyone.”

Martin, who yo-yos his way through Grand Tours, losing two minutes one day, gaining three the next, will be one of the outsiders at La Planche des Belles Filles, Friday’s first summit finish.

“It’s a climb I like a lot,” Martin said. “I preferred it when it was a tougher stage with a couple of earlier climbs. It’s not very long so I don’t think there will be big gaps, but in the racing of today, you can never be sure how it’s going to pan out, as you saw in Longwy when Pogačar went on the attack.”

The new race leader is relishing a return to the Vosges, where in another show of strength he dethroned the unfortunate Roglič in 2020’s COVID Tour. Consecutive stage wins seem a distinct possibility.

“We will try to control (the race) but if it’s not possible, it won’t be a disaster,” Pogačar said, “but I would like to go for it.”