Vingegaard the victor, but this was the Wout van Aert Tour 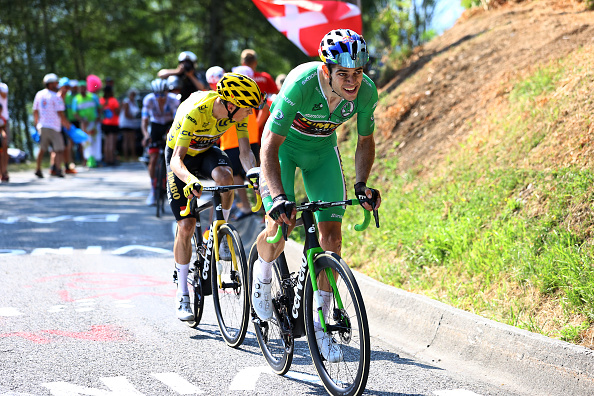 For three stages, the 2022 Tour de France ran to type. While a slight change in the weather conditions meant that the Copenhagen time trial produced a surprise victor in QuickStep-Alpha Vinyl’s Yves Lampaert, the two stages that followed went to the bunch sprinters despite so much hype about crosswinds and narrow coastal roads.

The Tour then broke for its unprecedented early rest day in order to make the journey from Denmark to France. On the journey south it appeared that all preconceived and very well-established ideas about how to win and compete at the Tour de France were cast away. As soon as the race reached home ground, the attacks began and continued almost ceaselessly to the finish.

The trigger was Wout van Aert, a green jersey winner of the kind that we’ve not seen since Eddy Merckx took the points title three times. Jumbo-Visma’s man of all seasons and of all terrains, van Aert began by serving up an audacious coup on the road across headlands into Calais with his teammates. Initially, this seemed to be a clear attempt to put down a marker on the green jersey. However, as the race unfolded, it became evident that it was part of van Aert and Jumbo’s contemporary take on ‘la course en tête’, Merckx’s philosophy of racing at the front, being proactive and unsettling your rivals.

Now in the yellow jersey, he gave another astonishing display of his prodigious ability 24 hours later over the cobbles into Arenberg. After Tadej Pogačar had barrelled away with Jasper Stuyven with 19km remaining, quickly opening up a lead of close to a minute on his GC rivals, the Belgian, who’d been dropped from this second group, re-emerged at the front of it. A duel ensued, Pogačar and Stuyven versus van Aert. It wasn’t an even contest, but not in the way anyone would have expected. At the line, the gap between the two escapees and the other overall candidates was just 13 seconds. He’d not only rescued Vingegaard’s GC hopes but those of half a dozen other riders.

And there was no let-up. The very day, he went away in a three-man break on the road to Longwy. He was the last of the trio to yield, the effort costing him the yellow jersey. But his style remained unchanged. He had another winner’s medal around his neck at Lausanne.

What’s more, as the Tour unfolded, it became increasingly evident that the multi-talented Belgian wasn’t the only one forsaking a defensive approach for a method that was riskier, but more enjoyable for both rider and fan. Magnus Cort raced through the opening days as it were a one- rather than a three-week race, getting his reward with a stage win at Megève. Defending champion Tadej Pogačar grabbed every opportunity and bonus second that he could, attacking over the cobbles into Roubaix, winning back-to-back stages at Longwy and La Super Planche des Belles Filles, relentless in his pressing.

Almost every stage was like a one-day Classic, ridden as if there was nothing at stake the next day, even in the high mountains. The Tour’s return to the Col de Granon epitomised this. Jumbo goaded Pogačar with attack after attack on the Col de Télegraphe and then the Col de Galibier, the UAE team leader and yellow jersey ultimately reacting with sorties of his own.

As would be the case on the two biggest stages in the Pyrenees, van Aert was ahead of the GC action, in the break once again, his sights set either on the stage win or on sowing further havoc among Vingegaard’s rivals. The Belgian’s forcing on the front of the yellow jersey group on the Granon didn’t finish off Pogačar that day, but it contributed to the Slovenian’s unprecedented collapse and irretrievable loss of the lead to Vingegaard. The next day, van Aert was in the same monstrously powerful form on Alpe d’Huez defending yellow as Tom Pidcock stole the show with a dashing performance of his own.

The attacks continued. Mads Pedersen opting for the breakaway on what seemed a nailed-on sprint stage into Saint-Étienne and scorching his rivals in the blistering heat. At Mende the next day, Michael Matthews, so frequently the nearly man, pulled off the best victory of his career with a hugely impressive and beautifully judged ascent of the fearsomely steep Croix Neuve climb to the finish. Even when the sprinters finally did get a look-in at Carcassonne, French track star Benjamin Thomas was less than 500 metres short of denying them with a courageous solo effort that enhanced his burgeoning reputation on the road.

Come the Pyrenees, Hugo Houle produced one of the great stories of the Tour by taking victory in Foix a decade on from the death of his brother Pierrick, who was killed by a drunk driver. Once again, van Aert’s green jersey swayed the contest for yellow. Having been in the break, he stopped at the top of the final climb of the Mur de Péguère and waited for Vingegaard and the rest of the yellow jersey group. What was the point in trying to attack, asked Pogačar, when van Aert was ready to drag the Dane back up to him?

To his credit, though, the Slovenian did keep attacking. He won at Peyragudes, finding a final joule of energy to propel himself past Vingegaard at the line. He was caught, however, in the cycling version of rope a dope, the tactic employed by Muhammed Ali against the big-punching George Foreman in their Rumble in the Jungle. Like Foreman, Pogačar swung with everything that he had. Like Ali, Vingegaard took all of the blows and then, with his rival beset by fatigue, delivered the knock-out punch, van Aert hugely again prominent in the set-up on the climb to Hautacam.

The race for yellow was all but over, but Jumbo and van Aert still weren’t finished. The Belgian helped set up Christophe Laporte for an impudent victory in Cahors, the sprinters denied once again, and followed that up with a third success of his own in the time trial at Rocamadour.

Make no mistake, while Jonas Vingegaard rightly took the main spoils in Paris, this was in so many ways the Wout van Aert Tour. He rescued his leader on the cobbles and paved the way for the Dane on almost every other key stage.

Attack trumped defence and it resulted in what was arguably the best Tour since 1986.