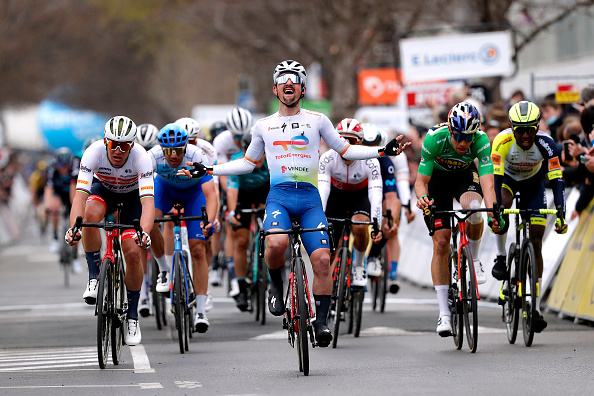 Mathieu Burgaudeau (TotalEnergies): Catch a fleeting glance of Mathieu Burgaudeau in the Tour peloton and you’d be forgiven for thinking that Julian Alaphilippe had made it into the race after all. With the same swashbuckling good looks and goatee beard of the world champion, the 23-year-old Frenchman will be making his second Tour appearance following a string of outstanding performances during the first half of this season.

Fifth overall in the Étoile de Bessèges at the start of the year and 17th at the recent Tour of Switzerland, he stood out at Paris-Nice with a ballsy victory on the rolling sixth stage into Aubagne. He displayed plenty of Alaphilippe’s swagger and grit as battled to hold off the bunch after attacking nine kilometres from the line. Only 100 metres clear with a kilometre to go, he flung himself through the twists and turns of the technical finale and just had time to celebrate his success as the bunch thundered through right on his heels.

Member of a family who make their living from fishing on the island of Noirmoutier, off France’s west coast, Burgaudeau was a prolific winner in the junior ranks and was widely courted by pro teams. But he struggled after making the step into the pro ranks. Yet, his boss, Jean-René Bernaudeau was always sure that the wins would come if he trusted in his instincts and talent. Paris-Nice was his first breakthrough. He’s aiming to make the Tour his next. Benjamin Thomas (Cofidis): When Bradley Wiggins, Geraint Thomas and other star performers from British Cycling’s track squad began to dominate the road scene, the French began to cast around for riders of a similar mould and a good deal of attention was focused on Benjamin Thomas. Hailing from Lavaur in France’s south-west, Thomas first came to prominence as the world junior points race champion in 2013, and has continued in the same winning vein on the track since he’s risen into the senior ranks. He was world omnium and Madison champion in 2017, regained the omnium title in 2020, and points champion in 2021.

However, the 26 year old’s road career hasn’t followed the same trajectory, until this season at least. Initially a member of the Armée du Terre team, he then spent four seasons with FDJ, picking up a stage win in the Four Days of Dunkirk in 2017 and the French time trial title two years later, but spending most of his time focused on working for other riders on the roster.

Given the chance this season by Cofidis to chase his own objectives, Thomas immediately found his groove at the Étoile de Bessèges, winning a stage and the overall, illustrating in the process how his climbing has improved. After a couple of wins at the Glasgow Track World Cup round in April, a stage win in May’s Boucles de Mayenne set him up for another GC win. Those successes revealed that the Frenchman has regained the punch that he showed in his early years, and this quality should stand him in good stead on a route that leans heavily towards riders of this type. Could he be the one who ends a Cofidis Tour drought that now stretches back to 2008? Bob Jungels (AG2R-Citroën): The Luxembourg rider is hardly an unknown, having won Classics such as Liège-Bastogne-Liège and twice finished in the top 10 and as best young rider at the Giro d’Italia, but a succession of setbacks led to Jungels falling away from those heights since joining AG2R-Citroën at the start of the 2021 season. Hindered by a back injury to begin with, then by a heavy fall at that year’s Amstel Gold Race, and, most seriously, by iliac artery endofibrosis which required an operation that summer, the 29 year old has been clawing his way back towards his former peak since returning to race action at his national tour last September.

At the recent Tour of Switzerland, Jungels was back near his very best. Not far off the pace of the best in the mountains, he finished fifth in the final time trial, just 33 seconds behind winner Remco Evenepoel, to end up sixth overall in the race won by Geraint Thomas. That secured him a spot on his French team’s Tour line-up, where the first priority will be defending the overall chances of GC leader Ben O’Connor.

After his stage win at 2021 Tour stage win at Tignes and fourth place overall, the Australian will be closely marked over the coming three weeks, which should provide Jungels and punchy riders like Benoît Cosnefroy and Geoffrey Bouchard with the opportunity to seek their own opportunities. Strong on the cobbles and well-versed in crosswinds thanks to his years with Quick Step, as well as being very durable on rolling and medium mountain stages, the Luxembourger has plenty of chances to emerge into the limelight again, offering a reminder of what a classy performer he is when in full flow. Brent Van Moer (Lotto-Soudal): There’s sure to be a lot of talk about the relegation battle in which several prominent teams are embroiled and could lead to them losing WorldTour status at the end of this year and, as a consequence, being banished from that elite status for the next three seasons. Going into the Tour, Lotto-Soudal are one place below the 18 teams that currently hold the highly-coveted WT spots, but are less than 20 points behind BikeExchange-Jayco in 18th place.

With a view to reversing those positions, the Belgian squad has picked a team of eight in which sprinter Caleb Ewan is their prime hope for stage wins, but also features a number of riders who’ll be given the responsibility of chasing victories – and points – on the many days that the Australian is unlikely to feature. Philippe Gilbert and Tim Wellens are their other big names, but keep an eye out too for their younger guns, Dane Andreas Kron and Belgians Florian Vermeersch and Brent Van Moer.

The latter was a Tour debutant last year and went extremely close to pulling off a sensational breakaway victory on the fourth stage into Fougères. Away in a two-man break, Van Moer went solo in the last 10km and looked like he was going to hold off the bunch only to lose vital ground on the final small rise and see the peloton sweep by him with just 150 metres to the line, where Mark Cavendish grabbed the headlines with his first Tour win for five years. Anointed by some as a successor to Thomas De Gendt as a breakaway specialist, Van Moer goes into the Tour determined to use that setback as fuel over the next three weeks. Aleksandr Vlasov (Bora-Hansgrohe): While almost all of the GC talk is focused on Tadej Pogačar, Primož Roglič, Geraint Thomas and Jonas Vingegaard, Bora’s Aleksandr Vlasov has tiptoed into the small circle of serious contenders on the back of a series of stellar performances over the first half of this season. Winner of the Tour of Valencia at the start of the season, then fourth in the UAE Tour, third in Itzulia Basque Country, winner at the Tour of Romandie and, most recently, race leader at the Tour of Switzerland until forced out of the race by a positive Covid test, the 26 year old looks well set to improve on an uneven Grand tour record that includes fourth place at last year’s Giro d’Italia but two DNFs in his two other starts.

This is Vlasov’s Tour debut, and comes at a time when his home nation, Russia, has been largely ostracised from the international world as a result of its ongoing invasion of Ukraine. Hailing from Vyborg, north-west of Saint Petersburg and close to the Finnish border, he’s understandably chosen his words carefully on the few occasions he’s discussed the conflict.

In an Instagram post made very soon after the invasion in late February, he stated: “I, like a lot of Russians, just want peace. I’m not a political person, and normal people like me weren’t asked if we want a war. It has been a shock for everyone and I hope that it will stop as soon as possible. It’s a difficult situation for everybody. I feel sorry for all the people who are suffering, and I hope that there will soon be peace.” Since then, he’s ridden without any national colours on his bike and kit, letting his evident ability on the bike do his talking for him rather than being drawn into discussions about the war, a situation that’s likely to change if he does emerge as a Tour contender.

His Bora team have enjoyed phenomenal success so far this season, which they entered with the objective of hunting down stage wins by racing aggressively. The approach has netted them a host of major titles, notably the Giro d’Italia crown won by Australia’s Jai Hindley. With sprinter Sam Bennett passed over for selection, Vlasov should be able to count on unswerving support from his teammates and that will boost his chances of a top five finish in Paris.