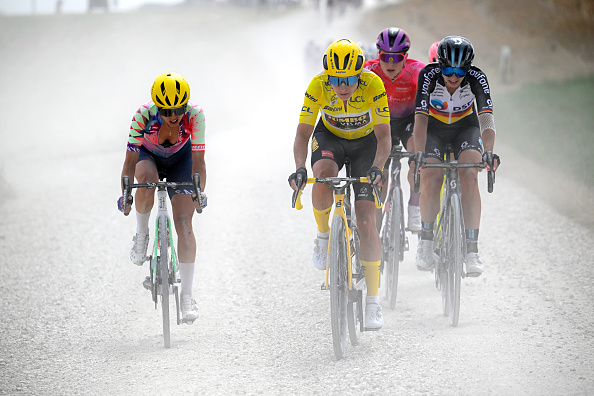 In the immediate aftermath of the presentation of the Tour de France Femmes avec Zwift, Annemiek van Vleuten described the route as “well-balanced” and having “something for everyone in these eight days of racing”. The Dutchwoman added one caveat, though. Asked about the inclusion of four gravel sections on the stage into Bar-sur-Aube, she stated, “that I don’t like too much – in a stage race”.

The pre-eminent stage racer in the sport further explained: “It really increases the importance of the ‘luck factor’, the ‘bad luck factor’, since you can lose the race because you can have a flat tyre. As I said, in a stage race, I don’t like it too much. It feels a bit of a lottery, too risky for a race like that. Hopefully, we will ‘survive’ and there’s no bad luck for anyone.”

Nine months on, and with experience of the gravel very fresh in her mind as she recovered at the finish in Bar-sur-Aube, van Vleuten’s opinion hadn’t changed a jot. “Actually, this does not belong in a stage race. Nice for the winner, but not for the GC riders. I like the Strade Bianche as a one-day race, but not in a stage race,” she said having emerged unscathed from this test by gravel.

The stage through the four sections of gravel road cutting through the vineyards of Champagne had been heavily hyped, and I was looking forward to it. Yet, in the hours before the stage started, I saw social media posts from journalists driving the course that revealed how rough the gravel was in some areas. Large pieces of ballast – the kind of stone you’d expect to see as the foundation for railway tracks – were apparent. Potholes and dried-out puddles had been filled with fresh gravel, which made the surface look pristine but were likely to make it very unpredictable.

When the riders reached the gravel, the racing spectacle died rather than blossomed. Tour de France director Christian Prudhomme is fond of saying that race organisers can only plan out a route, and that it’s up to the riders how to race on it. Yesterday, it was very evident that the peloton decided not to race at all, opting for safety rather than seeking competitive advantage.

Watching them trying to ride uphill as their rims were sucked into pockets of loose stone, it was easy to understand why they made this choice. The surface wasn’t consistent enough, Eurosport commentator and ex-pro Iris Slappendel, who was on a TV motorbike following the riders, asserting that, “Paris-Roubaix was a walk in the park” in comparison.

In issue one of Stelvio, I wrote a feature tracing gravel’s history in the sport, from the early pre-asphalt days when it was the only option for racers through to the current era, when the explosion in popularity of the Strade Bianche events across Tuscany’s white roads has encouraged other race organisers to search out tracks that might give their event a Strade-like boost. It was hard to find any pro or team manager who was in favour of their inclusion. Even Pete Stetina, the former Trek pro who’s now one of the gravel racing scene’s leading performers, who said he liked to see gravel sectors in road races, then added: “I do see that maybe it doesn’t have a place because when you’re talking about a stage race and things that can go wrong, you do want to see like the best riders succeed without bad luck. And what you’ve got to bear in mind that a lot of gravel racing is about damage control and mitigating mishap, which doesn’t sit well in road racing nowadays when the GC is decided by seconds.”

BikeExchange-Jayco manager Matt White was another in the anti-gravel camp when it comes to stage races. “I’m not for it at all. I think gravel racing is a great thing, but I don’t understand this argument about having gravel in road races because Eddy Merckx or Fausto Coppi used to race on it. They were also racing across it 10-15kph slower,” the Australian directeur sportif pointed out. “The guys these days are riding so fast it’s phenomenal, but it’s stressful too, and the complication of gravel only increases that.”

I also spoke to 2021 world cyclo-cross champion Lucinda Brand, winner of this year’s Tour de Suisse and third in Paris-Roubaix. She acknowledged that she doesn’t mind racing on terrain of these types, but believes that there’s a right place for them, and that this isn’t stage races. “A lot of organisers feel they need to add something now, but if they think they can follow the example of Strade Bianche, then they’re mistaken because that’s a special race, a unique race,” said the Dutch rider. “Every race has its own identity. For instance, I don’t like races that end in sprints, but that’s their identity and they need to keep them, that’s the most important thing. I think adding gravel is maybe a bit overrated.”

After yesterday’s loss of momentum at the Tour de France Femmes, which had been spectacular up to that point, I couldn’t agree more.