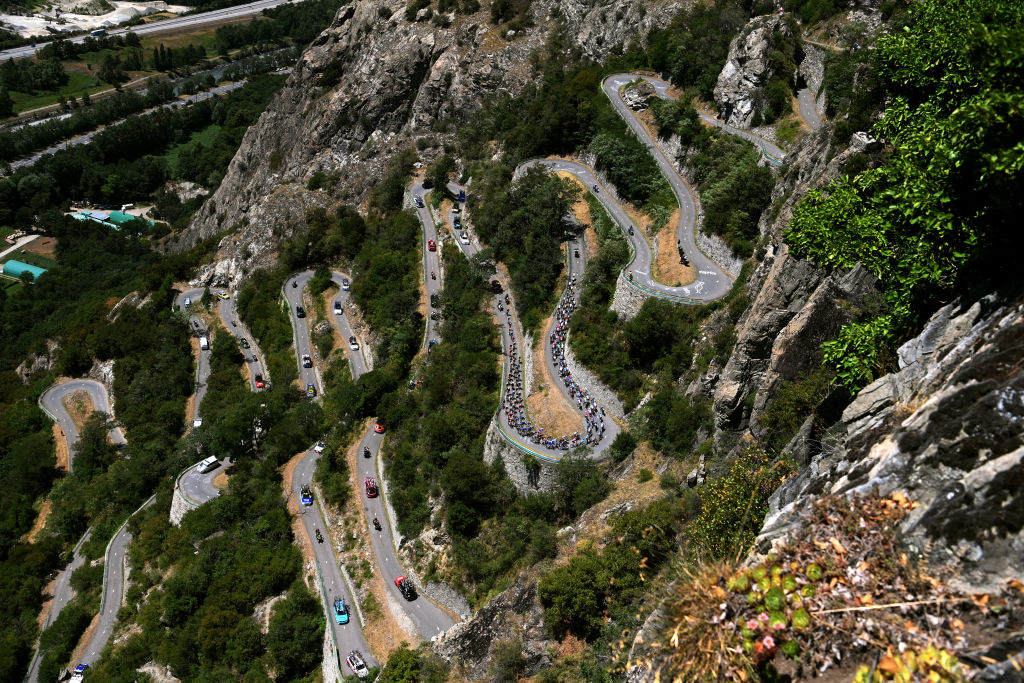 In the warm-down area in front of the Ineos Grenadiers bus in Megève, the 2018 Tour winner, Geraint Thomas, was mulling over the race so far – and the stages to come.

The Welsh rider admitted that the Stage 11 finish on the Col du Granon and the Stage 12 finish at Alpe d’Huez were “two big, big days for the GC”.

The stage to the Granon, he described as a “big day, high day, altitude-wise, and a hard final climb, obviously, with the Galibier and Télégraphe before. Then [on Stage 12] there’s Alpe d’Huez and the other climbs that day, so big days for the GC.”

Thomas revealed too that he had never ridden the Col du Granon, the fearsome climb last used in the 1986 Tour de France, on which five-time winner Bernard Hinault wore the final yellow jersey of his career.

“I’ve only seen the profile, and I know that it’s high altitude as well. It will certainly be tough, after the Télégraphe and Galibier, and the heat coming as well, so it will be a solid day. I think it’s a pretty consistent climb, so you either have the legs or you don’t.”

This pair of Alpine finishes, to the Granon and Alpe d’Huez, are among the hardest in recent memory and are sure to put riders under intense pressure. But even so, Thomas ruled out – for now – any thoughts of collusion with the Jumbo-Visma team, in a bid to topple race leader Tadej Pogačar and his COVID-depleted UAE-Emirates team.

“I said yesterday, I’m not going to be calling up Primoz [Roglič] and making a plan,” Thomas said, “but if the situation comes out on the road then obviously, if it works for both of us, then that would be good. But we just have to play it by ear.

“We have our main plan, and we will try to set out to do that. So, we’ll see what happens. We have to try and reduce that gap to Jonas (Vingegaard) and Pogačar. But there’s a lot of other guys in the race as well. We can’t be solely focussed on them. You can get overtaken from behind as well, so it’s just [a case of] see what we can do as a team.”

On Monday’s rest day, Thomas had sounded resigned to the defending Tour champion’s supremacy. In Megève, however, he seemed more upbeat.

But he added that the spate of COVID positives within the UAE-Emirates team would have “definitely” impacted on Pogačar’s control of the race.

“It’s a shame for them and it might start affecting other teams as well, but I guess that George Bennett was pretty sick. But it’s a funny one: Dani [Martinez] has been sick too but it wasn’t COVID so he could continue to race. Then somebody else gets COVID and they have to go home. So, it’s a tough one, but that’s the world we’re in at the minute.

“George was one of the stronger guys in the mountains as well, with Brandon McNulty andRafał [Majka] but once you have the [leader’s] jersey in the team and you’ve got somebody like Pogačar to ride for, you can all up your game, that’s for sure.

“There’s been times in the past when we were riding for Froomey [Chris Froome] that we had a bad day and looked really vulnerable, but we bounced back. You all stick together. I’m sure that’s what they’re going to do.”