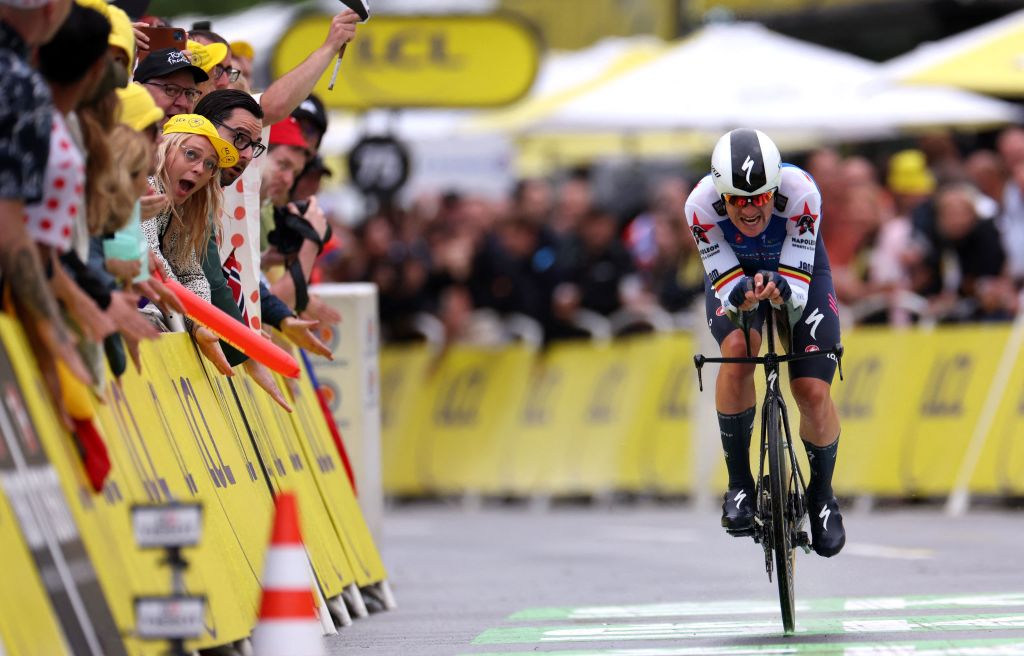 While Yves Lampaert upstaged everyone with the time trial of his career on Copenhagen’s road-dampened roads, the 13.2-kilometre test through the Danish capital produced a rather more predictable GC hierarchy behind Quick-Step Alpha Vinyl’s surprise winner and second-placed Wout van Aert. It’s led by defending champion Tadej Pogačar, who gained eight seconds on the first of Jumbo-Visma’s co-leaders, Jonas Vingegaard, nine on the other, Primož Roglič, 16 and 18 on Ineos duo Adam Yates and Geraint Thomas, respectively, and 24 on Bora-Hansgrohe’s form rider of the moment, Aleksandr Vlasov.

Yes, this is only day one and while even day two looks like being far trickier than anything we saw today on Copenhagen’s skidpan corners, the favourites for the yellow jersey all more or less lived up to their status. Pogačar should be the most pleased of them. Laughing and smiling as he waited for his call to the time trial start ramp, while van Aert in front of him was pinpoint concentration personified, the 23-year-old Slovenian looked as if he might have been lining up for a club ‘10’. The picture of relaxation before he started, he had the same ease on the bike. He tackled the corners with care, looked fantastically smooth and never appeared to be hurrying. How deceptive that image was.

Although their two leaders are already behind the two-time champion, Jumbo-Visma had lots of reasons to be cheerful with their time trial too. Wout van Aert’s knee injury didn’t appear to be hampering him, while Vingegaard and Roglič have clearly come out of their pre-Tour training camp in the Alpine resort of Tignes in very good shape. There was even a bonus in the performance of Christophe Laporte, who was fastest at the intermediate checkpoint before he was one of several riders who slid off on a bend. The Frenchman, though, came out of that apparently unscathed and should prove a significant asset to the Dutch team as they hunt the yellow jersey that’s hitherto been so elusive to them.

With four riders in the top 18 – Filippo Ganna (4th) and Tom Pidcock (15th) joining Yates and Thomas – British outfit Ineos also has its main hitters towards the top of the classification. Like Jumbo, they’ve got a Classics-seasoned line-up that should thrive on the upcoming handful of stages, starting tomorrow with the run into Nyborg, which features lots of narrow coastal roads and concludes with that much-hyped 18-kilometre crossing of the Great Belt bridges.

Trek-Segafredo’s Mads Pedersen will be on home roads for a good deal of stage two. The Dane has been focused on these opening days of the Tour for months now, and the rain didn’t dampen his hopes of a spell in the yellow jersey. Given his Classics pedigree, his local knowledge and, most importantly, his sixth-place finish in Copenhagen, just 15 seconds slower than Lampaert, Pedersen is well placed to fulfil his Tour dream.

His most obvious rivals in this respect are van Aert, who’s aiming for the green jersey and will be determined to be in the mix in Nyborg, and Mathieu van der Poel, who was two seconds quicker than Pedersen in the TT. The Dutchman is not chasing green, but has said his strategy will be similar to the one he employed at the Giro, where he set about ripping the race apart whenever he could and enjoying the fact. It’s worth noting that he won the second stage of last year’s race by adopting precisely that tactic, his win also helping to remove the yellow jersey from the shoulders of a Quick-Step rider, Julian Alaphilippe then in the Lampaert role.

Apart from van Aert, Pedersen and Michael Matthews, who also made the top 20, we didn’t much of the top sprinters today. Caleb Ewan tiptoed around so cautiously that Nairo Quintana overtook him well before the finish. Fabio Jakobsen, Jasper Philipsen, Peter Sagan and Dylan Groenwegen were also very watchful. Although the talk has been of a much-reduced bunch sprinting into Nyborg, they will all be determined to be in it.

Lampaert, aside, the other stellar showing today was from the fans who packed the time trial route in Copenhagen. They made it a glorious spectacle and many riders voiced their appreciation at the finish for the reception they received. Their numbers and enthusiasm boosted the level of expectation for stages two and three even more.