The Alps versus the Pyrenees 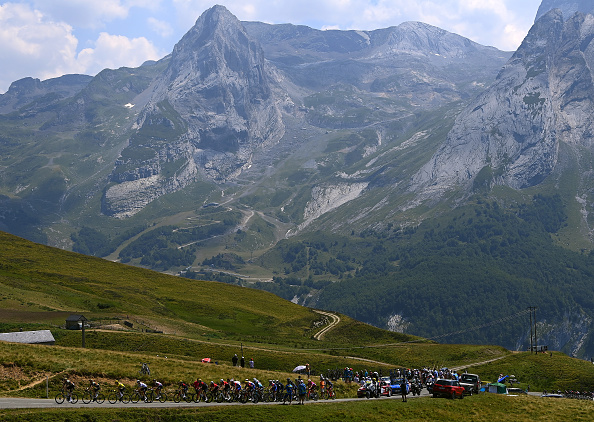 A couple of days ago, I was listening to François Thomazeau speaking on The Cycling Podcast about his preference for the Pyrenees over the Alps and, specifically, about his total dislike for Alpe d’Huez, which for the French journalist was a blot on what had been a pristine landscape. Thomazeau admitted that the resort and others like it, such as La Plagne, had opened up skiing as a leisure activity to millions from the 1960s, but have become unsightly and inharmonious in the modern era where tourism is increasingly defined by climate change and environmental respect.

Thomazeau, who has said that this year’s Tour will be his last as a journalist, stated that he won’t be returning to the Alps in his retirement, that he saw nothing to return for in its traffic-heavy valleys and forbidding grey landscapes, adding that he didn’t feel the same way about the Pyrenees. They are wilder, he said, greener and much less developed and unspoiled. Even the food, he suggested, was better in the Pyrenees, cassoulet always preferable to cheese-smothered dishes.

Hearing Thomazeau, I considered my own perspective. I can still remember my first sight of the high mountains during a family holiday when I was 13, and my astonishment and delight at the high Alps. This was underpinned by a skiing holiday a few years later to Tignes, another of those “mile-high” resorts that he finds so objectionable. I thought it was magical.

During the 40 years since that holiday, I’ve been back to both massifs many times and written about them extensively. I’ve written a book about Alpe d’Huez, “cycling’s greatest climb”, and have spent the past five years living in the Pyrenees, close to the small town of Foix that hosted the finish of Stage 16 won in such memorable fashion by Canada’s Hugo Houle.

I always relish the Tour returning to the Alpe. It isn’t the most attractive of climbs; the road hacked out of the mountain side as it climbs to that eyesore of a resort. Yet, as 1992 Alpe d’Huez winner Andy Hampsten suggested when I was researching my book, it takes on a very different complexion on the day the Tour arrives on the mountain, drawing hundreds of thousands of fans to its slopes. Then it becomes one of the great sporting arenas, a day that no fan would want to miss.

Although many of my press colleagues hate it, I enjoy the drive up it ahead of the race, seeing hordes of fans flocking up the mountain, thousands of them making the pilgrimage on their bikes, the many hilarious costumes that are sported, the sound systems belting out everything from Elvis to Euro pop, and, at the very top, the magnificent ring of peaks in the Grandes Rousses massif above the resort.

Like François, though, I am more taken with the Pyrenees. Partly that’s down to the fact they fill the view from the front of my home, but I also prefer riding its mountain roads and passes. They’re not as engineered as those in the Alps. They’re narrower and more irregular in their gradient, accommodating the gradient rather than ploughing through it, and there’s not so much valley riding between them, allowing even a pauper of the mountains like me to link together two or three cols over a manageable distance.

It struck me during a two-day spell atop Hautacam, where I went to watch the race with my family, that the most obvious difference between that Pyrenean resort – with its two small buildings that can’t be seen until you’re almost up to them – and Alpe d’Huez is that the former is more entrancing on any day that the Tour isn’t on its slopes rather than when it is. On every other day, Hautacam is tranquil and quite magnificent, a place for wandering and contemplation of the peaks on all sides, accompanied by only by the sound of the wind and of bells on the herds of cattle and horses that roam its vast open spaces. It’s not untouched by man, but it is unspoiled.