Stelvio: homage to the mythic climb 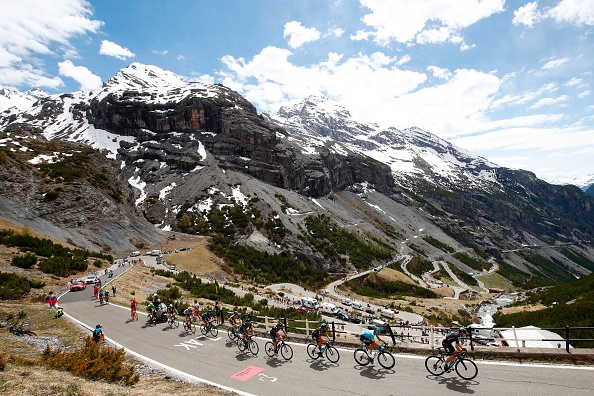 TOPSHOT - Riders climb the Stelvio during the 16th stage of the 100th Giro d'Italia, Tour of Italy, cycling race from Rovetta to Bormio on May 23, 2017. / AFP PHOTO / Luk BENIES (Photo credit should read LUK BENIES/AFP via Getty Images)
Wednesday 4th May 2022
Share

You don’t have to agree with everything Jeremy Clarkson and his Top Gear colleagues have said on great roads, but their verdict in the 10th series that the Stelvio pass was, the “greatest driving road in the world,” is hard to argue with. Just add the proviso that the 75 hairpins — 48 on the contorted north side — also offer one of the greatest experiences you can have on a bike, as long as you like going uphill for a long time, and not very quickly.

The Stelvio tops out at just over 9,000 feet or 2,757 metres, making it the highest pass in the eastern Alps, and with its epic ramps of hairpins, it’s pure catnip for the Giro d’Italia organisers in their constant search for spectacle and headlines. The Stelvio’s appearances have been rare – a bakers’ dozen since its first crossing in 1953 – but the stories are legion.

The tone of scandal and the spectacular was set that first year, when the legendary campionissimo Fausto Coppi won his final Giro with a daring attack on the Swiss Hugo Koblet.

At the start, Coppi’s loyal team mate Ettore Milano had inveigled Koblet into posing for a photo, sunglasses off so that Milano could assess whether the pedaleur de charme had the bloodshot eyes that betrayed over-use of amphetamines the previous day. His eyes gave his precarious state away; Coppi duly made his move.

There was no controversy about the verdict, but the 2014 Giro’s passage over the Alpine giant remains a matter of debate to this day. As so often happens, snow descended on the Stelvio, making the top of the descent a dodgy proposition, so the organisers opted at the last minute to “neutralise” the top of the climb, with the riders told to go behind the equivalent of a Formula One safety car.

There was confusion about who had got the message and who hadn’t, which riders had their helmet radios on, and who had pulled out the earpiece, and amidst the chaos, the pocket-sized Colombian climber Nairo Quintana made his winning move while others put their brakes on on the icy roads. Only “Nairoman” knows what he did or didn’t hear.

The most recent appearance of the Stelvio in the Giro came in late autumn 2020, after the race had been moved from its usual date due to the Covid-19 pandemic. It was chilly and autumnal, the slopes dusted with snow, and curiously, the mountain belonged to Australia, with the Ineos domestique Rohan Dennis, leading the future winner Tao Geogheghan-Hart over the top and Jai Hindley taking the stage in Laghi di Cancano.

But the abiding image was not Dennis’s power, but Hindley’s struggles at the top of the mountain as he attempted to put on a race cape with chilled fingers, wobbling all over the road for several minutes on the final bank of hairpins, and coming close to falling as he tried time after time to get his right arm into the sleeve. The Stelvio is that kind of mountain: utterly spectacular, and applying its unique cruelty in a variety of sadistic ways.

Now there’s talk of even greater prominence for the giant climb. Talks on a rumoured high-altitude finale to the 2025 Giro are said to be advanced, with the climactic stage finishing at the top of the climb, celebrating the creation of the road and the coming of the 2026 Winter Olympics. It would be a twist of the knife after three weeks of racing, but also the grandest of climaxes to the most theatrical of bike races.