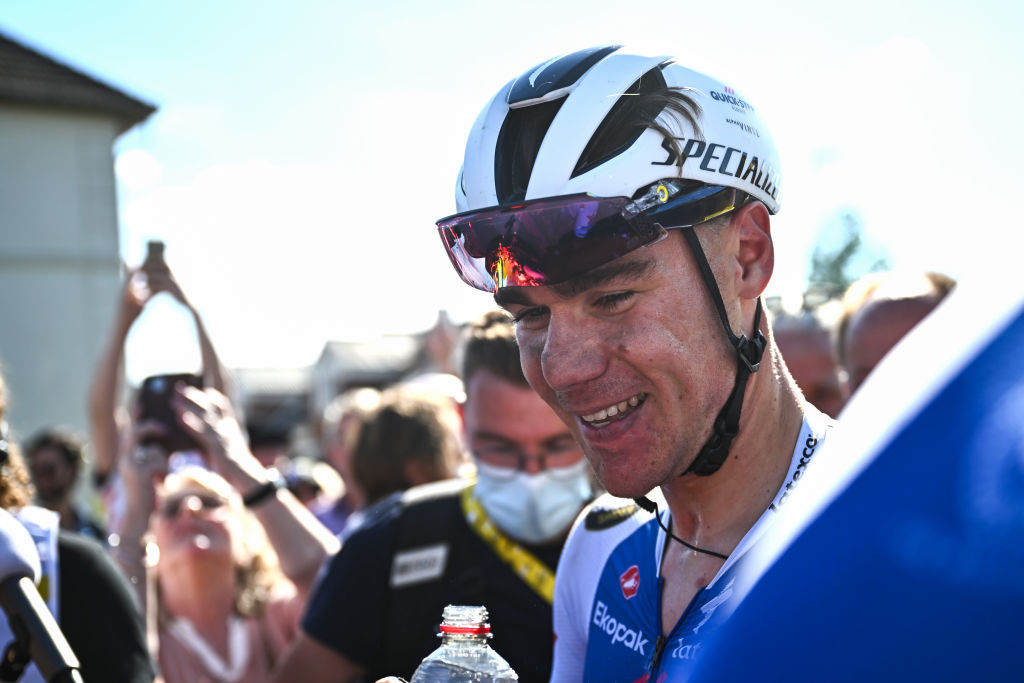 It takes more, much more, than just surgery, training, rest and positive thinking to recover from the kind of trauma that devastated Fabio Jakobsen in the Tour of Poland two years ago. The story of that crash is now well-known, but even so it remains horrific and shocking.

Blame in sprinting is difficult to prove. At such high speeds, the slightest error, wrong move, or misjudgement can be catastrophic. The slow motion analysis, the luxury of freeze-frame and VAR, only comes after the event, when the dust has settled.

There is no doubt, that on that afternoon in Poland, at close to 90 kilometres an hour, Dylan Groenewegen blocked Jakobsen’s path and that his actions put his rival into the barriers. Did he deliberately seek to injure him? No. Did he for an instant ponder the potential injuries he might inflict? No, because his mentality, like all sprinters, was to win, whatever it took.

The mental resilience and competitive fire that took both Jakobsen and Groenewegen to stage wins in the opening weekend of this year’s Tour is the same drive and ambition that caused their fateful coming together in Poland two summers ago. That’s the way sprinters are. They are pugilists, street fighters, who know the risks.

Over the past 48 hours, we have seen further evidence of that ‘win at all costs’ mentality, even from Jakobsen himself, who was hardly the shrinking violet when he barged Peter Sagan out of the way as he stormed to victory in Saturday’s finish in Nyborg.

There was more of the same on Sunday. Sagan, left complaining after stage three that Van Aert had blocked his path, will recall how he was evicted from the 2017 Tour after his move towards the barriers in the sprint finish in Vittel, forced Mark Cavendish to crash and then to quit the Tour through injury.

But there have been few incidents as horrific as Jakobsen’s crash. It is a testament to his strength of character and nerve that he has been able to return to the highest level. And while Groenewegen only suffered a broken collarbone, the mental implications were huge. Plagued by guilt, haunted by death threats, vilified by his peers, he has returned to the top, not buoyed by support and goodwill, but almost despite the resistance towards him. In some ways, that’s just as impressive.

Perhaps the closest sporting comparison is the awful collision in the World Cup semi-final in Seville, in July 1982, when the German goalkeeper, Toni Schumacher bodychecked sprinting Frenchman Patrick Battiston with his knee, leaving the French player with three broken teeth, cracked ribs, a damaged spine, unconscious and drifting in and out of a coma.

At the time, Schumacher appeared dismissive. Famously, despite the level of violence of his assault on his French opponent, he wasn’t even booked. He stood, hands on hips, distanced and aloof, and watched the medics, waiting to get on with the game. Later in life though, he was overcome with remorse.

In the days after the game, anger towards him, buoyed by anti-German sentiment grew. He beat Adolf Hitler in a poll of France’s worst enemies. He became a figure of hate.  “I couldn’t understand it,” Schumacher said. “Suddenly I was responsible for anti-German resentment flaring up in France. It sounded like I was going to trigger the next war.”

The German visited Battiston in hospital to apologise, but was angry when the media appeared to watch on. The next time he played France, there was an effigy of him hanging from a gallows. It took Battiston’s forgiveness to finally end the loathing towards him. “I have forgiven,” the Frenchman said in 2012, 30 years later. “People have forever marked him with this. Now it’s finished.”

Sprinting in World Tour racing is always a risky business, but let’s hope that this weekend’s catharsis in Denmark will allow Jakobsen and Groenewegen to leave what happened in Poland behind them.