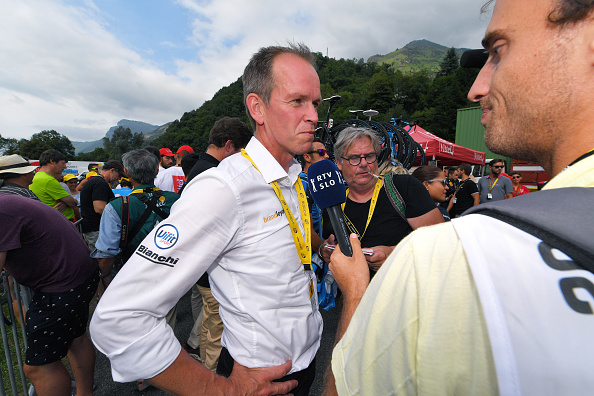 Stelvio: What was your first experience of the Tour?

Richard Plugge: The Tour de France was in Holland. It started in the city where I live now, Leiden, in 1978 I believe. And then it passed through my home city [Zoetermeer], the place where I was born. That was my first experience with the Tour de France. Back then, I followed all sports, but especially cycling and football. But from around 1976-77, I started to realise how much I liked cycling and what a nice sport it is.

Stelvio: What’s your favourite moment at the Tour?

Richard Plugge: There have been many, many now with the team so that’s really difficult to say. Maybe it was Primož’s victory at Serre Chevalier in 2017. That was really a great moment, a breakthrough moment for our team. It also showed what a warrior he was, and from there he led us towards the place we’re in today. I’m really grateful for that, but also glad for Primož that he did it in the Tour de France. He showed us that we could compete at the very highest level.

Richard Plugge: Tignes. I have an apartment there; it’s a great place. I discovered it before Primož started going there on his training camps. We used to have high-altitude camps in the area, and I really liked it. I’d never been there before we went there with the team, and it was then that I realised what a really beautiful place it is. You feel right in the heart of nature. I love cycling there, obviously, but also walking with my wife in the mountains. You can take yourself off to all kinds of places from Tignes, or go nowhere and enjoy the resort. That’s what I really like.

Richard Plugge: That’s another tough one. I think I’d go for [anything produced by] Pomerol, which featured on the route of the final time trial of last year’s race.

Richard Plugge [laughing]: Do the French have beer? The French do not drink beer, right? There’s no French beer worth mentioning.

Stelvio: Do we dare ask about French coffee?

Richard Plugge: No. There’s no French coffee, either!