Pogačar fails in attempt to lose the yellow jersey 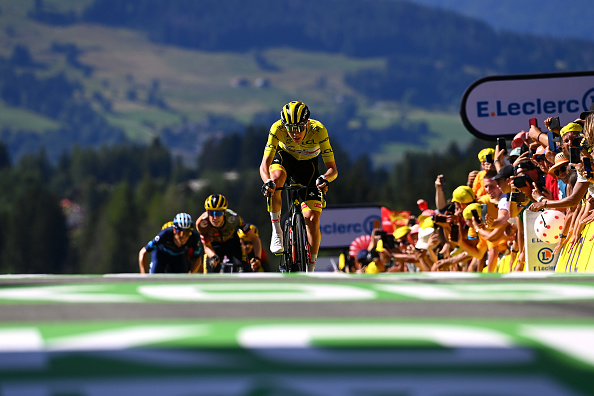 “Even when he wanted to get rid of it, he’s ended up keeping it.” Romain Bardet hit the nail squarely on the head, when he was asked at the Stage 10 finish in Megève about the deliberate attempt made by Tadej Pogačar and UAE Team Emirates to allow the yellow jersey to pass to another rider, to Bora-Hansgrohe’s Lennard Kämna to be precise, which made for a bewildering sub-plot during an engrossing day.

The short stage from Morzine to Megève over nothing more taxing than a second-category climb wasn’t designed to have much of an impact on the general classification contest and it didn’t, on the face of it at least. Although Kämna leapt from outside the top 20 on GC to the giddy heights of second overall, just 11 seconds behind race leader Pogačar, the Slovenian and his main rivals all came across the line in the same group, just under nine minutes behind the day’s winner, Magnus Cort (EF Education-EasyPost).

Yet the fact that the status quo in the GC battle was maintained ahead of back-to-back high-summit finishes in the Alps doesn’t tell the story of the enthralling finale. The lead-up to it began when Pogačar’s UAE team released a statement 34 minutes before the start announcing that George Bennett had produced a positive test for COVID and wouldn’t be starting the stage. The team added that Rafał Majka had also delivered a positive result, but the Pole was asymptomatic and, therefore, offered a low risk of infecting others. In line with UCI protocols, Majka was allowed to start, with his team “closely monitoring his situation”.

When the stage got under way, there was an extended and frantic battle to get into the breakaway. Ultimately, 25 riders got a pass for the day, Kämna among them. When the escapees’ lead reached half a dozen minutes, France TV’s commentary team, which includes four-time Tour stage winner Laurent Jalabert, former French national champion and now Tour de France Femmes race director Marion Rousse and recently retired pro Yoann Offredo, suggested that it might be expedient for Pogačar and his team to let the yellow jersey go to Kämna.

Doing this would, they said, ease the pressure on Pogačar’s dwindling number of teammates by releasing them from the need to set the pace in the peloton in defence of the lead. Bora would, they added, be glad to do this on Wednesday’s stage over the Galibier and then up towards the Col du Granon, giving the chance for the Tour’s defending champion to sit in behind them and save his team’s resources.

As Bardet suggested, and Pogačar himself confirmed to Stelvio after the stage, this was indeed UAE’s strategy on the long haul up from the Arve valley to Megève and then upwards again to the altiport above the resort town. “I knew this climb was nothing special so we dropped the pace, but in the end we kept the jersey by a few seconds, which is also good,” said the Slovenian.

French TV wondered whether rival teams had scuppered this ruse by riding on the front of the bunch to ensure that Pogačar and UAE kept the jersey, a theory that appeared to have some weight as Jumbo-Visma’s Wout van Aert did go to the front at one point, as did a gaggle of Groupama-FDJ riders supporting French hope David Gaudu.

However, Jumbo team director Grischa Niermann knocked this speculation down. He said that the Dutch team had considered this tactic but had decided against it because it would likely annoy Bora by depriving them from having a rider in yellow for a day or perhaps more, his explanation offering a useful insight into the shrewd thinking going on behind the scenes in situations like these. Why upset a rider and team that you might need to ask a favour of later in the race?

Niermann acknowledged that it suited Jumbo and Pogačar’s other rivals that UAE had kept the jersey, and in the end the Slovenian wasn’t too disappointed either. But it will be interesting to see how this might affect the race over the next couple of days. The UAE leader may be stronger than his rivals, but his support crew is now underpowered. The Tour may yet pivot on UAE’s failure to lose the yellow jersey in Megève.