Nothing seals a comeback like a Tour stage win 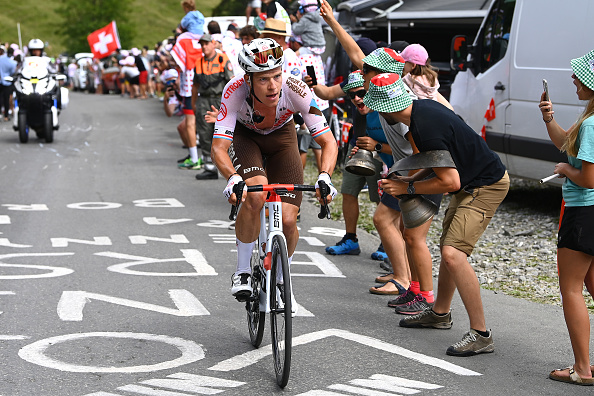 While all of France and lots of fans across the world spent the last half an hour of the stage into Châtel desperately hoping that Thibaut Pinot would prevail, it was impossible not to feel happy for eventual victor Bob Jungels as he took his first big win since Kuurne-Brussels-Kuurne in 2019. The subsequent three have been what the Luxembourg rider described as a “rollercoaster”, the biggest dip during that period lasting for almost two years as Jungels struggled to maintain his efforts when riding above his threshold power level and doctors were mystified as to why this was happening.

It was a bewildering period for  Jungels, who, in 2018, won the last edition of Liège-Bastogne-Liège that finished in Ans, the industrial and rather grim suburb of Liège. Race organisers ASO had decided to switch the finale back to the centre of Liège after that edition because it was widely felt that the race had become a 250-kilometre waiting game among the favourites, who tended to save their powder until the kilometre-long drag up the Côte d’Ans towards the finish line. It was, in short, a non-spectacle. It was predictable and dull.

However, that year Jungels served up a winning flourish that ran totally against that well-trodden pattern. On the false flat towards the top of the penultimate climb, La Roche-aux-Faucons, Jungels powered clear of the five-strong lead group and, over the last 18 kilometres, made full use of the time trialling ability that has made him an eight-time Luxembourg national champion in the discipline. He backed up that hugely impressive performance by finishing 11th overall at the Tour as he sought to establish his credentials as a GC leader.

That Kuurne victory at the start of 2019 suggested that he was still on the right path, but his results nosedived. He was consistent, but not the threat he’d previously been. He switched from Quick Step to AG2R, but his performances didn’t pick up. He was hampered by a back injury and then suffered a heavy crash at the Amstel Gold Race. Then the eureka moment came. Doctors finally diagnosed iliac artery endofibrosis – blood passing through his hips towards his legs was being blocked by arterial tissue as he made the full gas efforts needed to contend and win the biggest races.

“It was very, very tough the last two or three years. Last year, we finally found the source of the problem and I had surgery. Then I started this season with a lot of motivation, hoping that I would be back at my level right away, which absolutely didn’t happen,” Jungels revealed in his post-win press conference in Châtel.

“It took a long, long time to recover, which sometimes led me to believe at the beginning of the year that maybe I wasn’t going to make it back. But things suddenly improved during the couple of weeks before the Tour. It’s been a rollercoaster of emotions, and it’s nice to be at the top of the rollercoaster once again.”

Jungels said his time trialling ability had been fundamental to his victory. He first eased up to Simon Geschke approaching the top of the penultimate climb, the first-category Col de la Croix. “I told Simon that I didn’t want any points. I just wanted to work with him to get close to the next climb, but I lost him on the descent somewhere. Then my time trial ability helped me a lot, especially in that valley, just to maintain that threshold effort. I knew that if they wanted to catch me they would have to go very, very fast,” Jungels explained.

“And then on the last time climb it was more or less the same. I was just trying to pace myself as well as possible up there. The radio was telling me how far Thibaut was behind him and, happily, it worked out.”

It was a fine win, similar in some ways to his 2018 Liège success. Like that win, it suggested that more major titles will fall the way of Jungels, perhaps even before the end of this Tour.