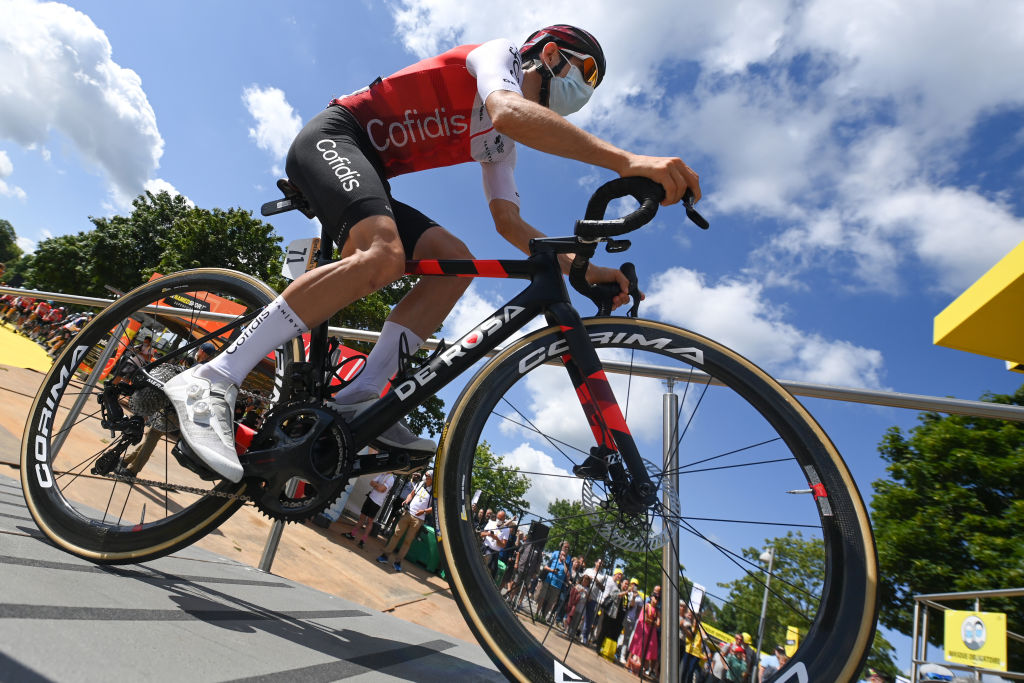 Most Tour teams were masked-up as they arrived for the start of Stage 9 in Aigle, but Monday’s batch of rest-day testing for COVID-19 is expected to spark further withdrawals from the peloton.

As the Stelvio wagon drove past the Jumbo-Visma vehicles on the way to today’s Tour de France stage start in Aigle, the seat of the UCI, cycling’s world governing body, all the members of the entourage were masked up. But according to some inside the convoy, other teams have been less strict.

How many riders will test positive on Monday’s rest day is unclear, but according to Ineos Grenadiers’ team boss, Rod Ellingworth, there is a possibility that it could be several.

“I think there’s a massive difference between the teams,” Ellingworth said on Saturday. “Some teams are a lot more lax. Some teams aren’t wearing masks, some teams are.”

It’s a certainty that, with Guillaume Martin of Cofidis leaving the race on Sunday morning, as well as Geoffrey Bouchard of the AG2R Citroën Team testing positive, as did Vegard Stake Laengen, Tadej Pogačar’s valued teammate, that there will be more positive tests on Monday.

The unspoken fear is that, with two weeks of the Tour still to play out, what happened in the Tour of Switzerland – where less than half the starting field of 153 finished the race after COVID positives swept through the peloton – could be repeated in the biggest race of the year.

“In Switzerland there was definitely an issue among the peloton,” Ellingworth said. “That’s why so many dropped out. It was most likely passed through the peloton. But not one of us is above this and it’s reliant on self-policing.”

Over at Groupama-FDJ, sports director Philippe Mauduit said, after three different teams had positive tests in 24 hours, the alarm that COVID was still in the peloton was in some ways timely.

“These positives are a wake-up call to say ‘Guys, keep the pressure on, COVID is still here,’” he told Stelvio. “It tells us that what happened in the Tour de Suisse a few weeks ago can happen here, in the Tour.”

“We always have been internally pretty strict with our rules and our protocols,” Mauduit said of his team. “We try to make sure that everybody in the team respects those internal rules.

“I can’t judge the other teams. We are in our own bubble, so we don’t look at what the other teams are doing. We can see that in some teams they wear a mask in the car, in others they don’t. Maybe they have a test every morning and are sure that they are not positive, but we test and keep the masks on as well.”

Mauduit dismissed any idea that he and others were nervous about COVID spreading. “It’s three years now that we have lived with this,” he said. “We just have to adapt to what’s going on and when the numbers are increasing you just tighten the screw a little and make sure you follow the rules.”

Ineos Grenadiers are one of the eight teams being followed by a dedicated Netflix film crew throughout the Tour and Ellingworth revealed that the entire crew had been replaced after one tested positive.

“We’ve got Netflix with us all the time. Our Netflix crew was changed because one of them tested positive, during this race. There are three of them and the sound guy tested positive so they changed them completely because the others were close contacts.”

“If you think how many people now have access – the Velon guys have just been around the bus, we have had the UCI coming in and testing the bikes and you’ve got doping control who can come at any moment. I don’t think we can tighten up any more,” he said.