Hugo Houle: It was a dream to win for my brother 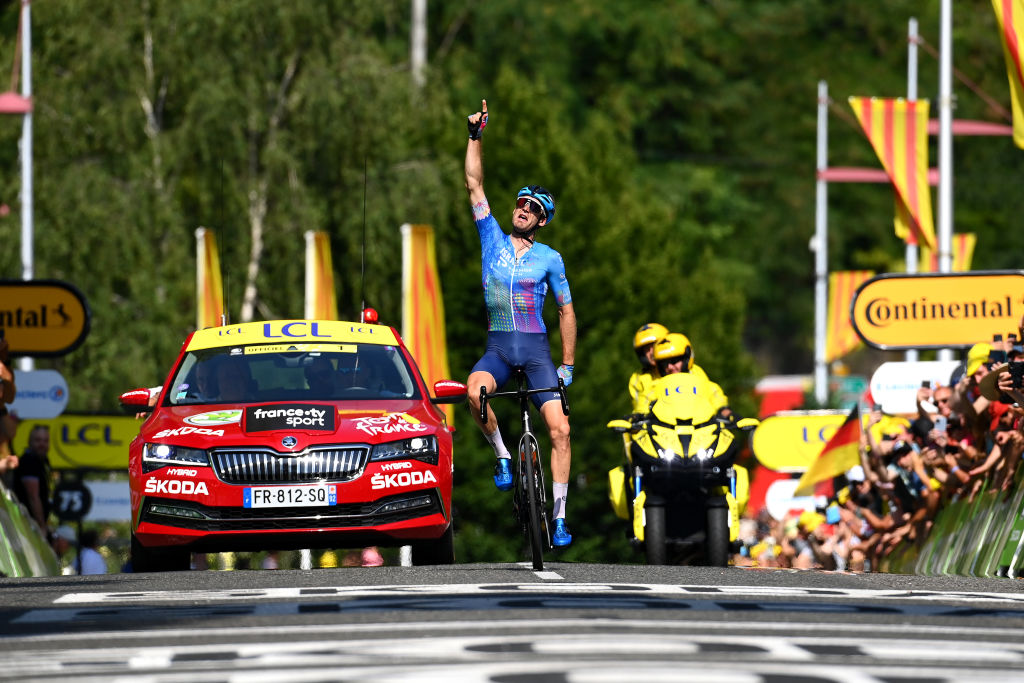 The press room fell silent listening to Israel-PremierTech’s Hugo Houle talk about his Tour stage victory in Foix and what it meant to him to fulfil the dream he had to win for his brother, who was killed by a hit-and-run driver in 2012. Here’s what he had to say…

When did you know that you were going to make it to the line?
I was struggling a bit to maintain the gap that I made. With 1km to go I knew I had about a minute. Then I knew victory was done, and I tried to enjoy it as much as possible. The car team told me to enjoy it. To win today was a dream for my brother who died 10 years ago. He was my biggest fan, and I wanted to win in his honour. It was a dream. If I’d had to write down a dream and how I wanted to win a stage, that was it, solo. It’s crazy. I’m still struggling to believe that I did it.

Can you tell us a little bit about your brother?
My brother was three years younger than me. We started triathlon together and he was faster than me at first. He was faster at the running. We joked about it. We shared lots of dreams together in sport, whether in running or cycling. As the years passed, I became stronger but he was my biggest fan. When I turned pro I finished fourth in the world under- 23 road race champs and he sent me a video to mark that performance.

When he died there was no one to share the story, but thinking of him was my way to keep believing. Of course, when things like this happen in life, it takes a few months to recover from it. That was my motivation. I never won anything in my life and today I won for the first time, and it was at the Tour.  People might have thought I was crazy, they might have had no idea that I could do it, but today I did it.

Can you tell us what happened to him?
My brother went for a run in the small village where we live. It was eight o’clock at night and it was snowing village at 8pm. He went for a run and he never came back. He got hit by a car and the guy ran away and left him for dead at the side of the road. Me and my family went to search for my brother. I found him about three hours later dead.

When I got to the scene they were doing cardiac massage. I took his hand and I saw the blood coming from his ear and his mouth, and that’s when I knew he was dead. The guy who’d run away came back later and there was a police investigation into the guy… but that’s how I lost my little brother and I can tell you it hits you pretty hard.

In life, I always say that when you’re in trouble there might be four or five people who you can turn to and he was one of them, so I had one less and that leaves a big hole in your life. But you have to move forward, and then I went into my first year with AG2R and I have to say that the team were unbelievable. They gave me another contract and took care of me. You know how as a young professional they could have turned to the next rider, but they gave me a lot of time to recover. And now that I am where I am, it’s because of them.

I remember that when I turned professional that year, I was at Paris-Roubaix and I just didn’t know what I was doing there because I was still in shock from this event, and they gave me a few years to get back to the normal.

How does it feel to be the first Canadian to win a stage of the Tour de France since Steve Bauer in 1988?
It’s quite crazy. We have more and more Canadians on the WorldTour thanks to our team and PremierTech and the PremierTech development team. We’re working to have the next generation and I think what I achieved today can can be an inspiration of what is possible.

For me, it was David Veilleux, who was the yellow jersey in the Critérium du Dauphiné a few years ago who showed the way. And today I hope I can inspire people at home in North America. It demands a lot of sacrifice to leave home. It’s one year of not seeing my parents and my family because I have to be in Europe, I have to race. To win a stage of the Tour was what motivated me today.

To answer the question, I’m really happy that I could win for Canada, and also I had Steve Bauer in the car behind me and I had him on the radio. He just told us, “Enjoy it boys, enjoy!” in the final. I was so nervous. I was still going full gas and he was saying, “You got this. Take it easy, man.” It was nice to have the time to enjoy. I hope we don’t have to wait another 34 years for a Canadian to win.

Was the plan for you and Mike Woods to be in the break?
Yeah, we had that plan, but they don’t always work. But the plan was to have Michael Woods and me in the breakaway if we could. We managed that, so that was a step in a good direction. In theory, Michael should be the guy who’s the strongest on that climb. But in the end, we played the strategy well. My idea of going ahead was to take some pressure from Mike so he could sit on and just follow the other guy and then the other guy had to work. If they caught me, Mike would go. But in the end I stayed away and Mike was just surfing behind. So the strategy came together for us.

What memory will you take away from the final climb, the Mur de Péguère?
A lot of pain. I had a 39×30 gear and it was really hard to turn it. I was suffering. I was overheating. So I paced myself well because I was starting to get caught a little bit on the climb with the sweater. I was on the edge. There was a lot of suffering, especially on the steep part. I was like, “I need to hold the gap. I need to hold the gap. If I can hold 40 seconds I can win”.

And I just went as hard as I could. I was really on the limit. And then when I saw the top I was like, “Wow! I did it”, and I really pushed hard. The last downhill was hard because I was missing a bit of food and liquid. So I was starting to cramp and was a bit worried. But the closer I got to the line I had lots of adrenaline, and I was saying, “It’s not every day you can have the chance to win. When it comes you have to go all in.” And that’s what I did.