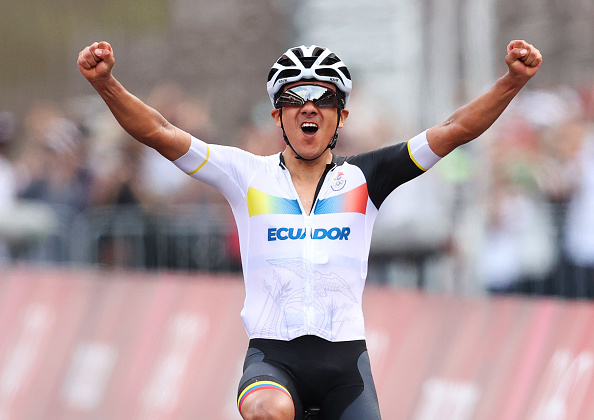 Richard Carapaz won the 2019 Giro, but hasn’t secured a Grand Tour since. Now would be a good time for the 28-year-old Ecuadorian.

It took a long time to get to Dave Brailsford during last year’s Tour de France. Eventually, the architect of Team Sky and Ineos Grenadiers made time to chat outside the team bus on the climactic weekend, as across the road Tadej Pogacar, set off down the start ramp for the Tour’s final time trial.

The advent of the Slovenians — Pogacar and Primoz Roglic — has been a game-changer for Brailsford and his staff. After the departure of Chris Froome and the sudden death of sports director Nico Portal, there was a reboot required. The success of Pogacar and Roglic only further emphasised the need for greater options and new leadership. Now with 2021 Giro winner Egan Bernal sidelined through injury, all eyes turn to Carapaz.

Carapaz is due another Grand Tour. He has the team to back him up and the ambition to make the most of the final days of climbing.

Brailsford saw Carapaz finish third in last year’s Tour, to follow his second place in the previous year’s Vuelta, and was the first to sing the 28-year-old’s praises.

“I am very proud of Richard’s performance,” he said. “He’s the first Ecuadorian to finish on the podium of the Tour.” Citing Carapaz’s “heart and commitment,” he described Carapaz as a “joy to work with.”

“He’s won the Giro, been second in the Vuelta, and podiumed in the Tour. He takes it on,” Brailsford said.

Speaking to the media on the eve of the Giro, Carapaz too sounded ready to make it a hat-trick for his team, who won the 2020 and 2021 Giros, through Tao Geoghegan Hart and Egan Bernal, describing the Italian Grand Tour as “a race that I love.”

After a build-up to the start in Hungary that included time in Ecuador, Carapaz was unequivocal: “I want to win.”

Like his team, which has reinvented itself in recent seasons, the Ecuadorian said he is “very different” to the rider that won the 2019 Giro.

“I’ve learned a lot, I’ve raced many different races, against some big rivals. Now more than ever I come to this Giro with a very clear objective. In 2019, I was sharing the role of the leader on the (Movistar) team.”

Carapaz has also won an Olympic gold medal since then [pictured], a success that demonstrated his gutsy and pugilistic riding style at its best. But he knows too that the Giro’s volatile and tactically unpredictable nature — something he exploited when he made his key attack in 2019 — means that all scenarios are possible.

“There are four or five riders who come here with very good form and high ambitions, so we cannot overlook anyone,” he said.

But looking on the bright side for Ineos Grenadiers and Carapaz, there is no Pogacar or Roglic on the start line in Budapest. In the 2021 Tour, when Pogacar made his key move on the eighth stage to Le Grand Bornand, Carapaz, who was one of the few GC contenders able to follow the Slovenian’s attacks, eventually had to cede ground.

In the 2020 Vuelta, Roglic held off the Ecuadorian, almost by stealth, clawing back bonus seconds when he could, even though he and Carapaz seemed equally matched. That final winning margin, a mere 24 seconds, was a tribute to the Slovenian’s tenacity and his time trialling supremacy over Carapaz.

As with Simon Yates, winner of the Vuelta in 2018, Carapaz is due another Grand Tour. He has the team to back him up and the ambition to make the most of the final days of climbing. The time trials are short enough to minimise his losses. As Brailsford would say, it’s time to take it on.