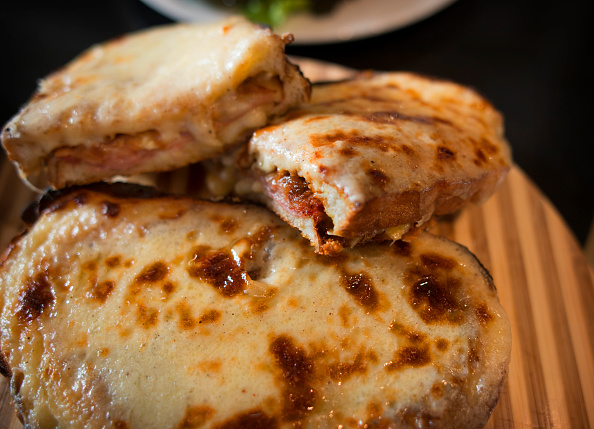 One of the most intriguing menu options for any Brit in the Pas de Calais is the Welsh. The name immediately suggests some relationship with Welsh rarebit, the British equivalent of a croque monsieur that has melted cheese on toasted bread, and at first glance there are clear similarities. The Welsh, or in some establishments Welch, is heavy on the cheese and it does tend to be Cheddar by preference, although some prefer Cheshire or (and this is surely messing with nature) Swiss Emmental. However, rather than being served on bread, the cheese is mixed with beer and then topped with ham and a fried egg. As the Pas de Calais rubs elbows with Belgium, it’s often accompanied by chips, and sometimes Worcestershire sauce or mustard.

Why Welsh? That’s unclear, but it seems most likely that it was derived from Welsh rarebit, originally “rabbit”, in which the cheese is believed to have been a substitute for rabbit, the meat being beyond the means of most people, not only in Wales, but also in England and Scotland, where “English rabbit” and “Scotch rabbit” were also common. How it ended up being a local speciality in this part of northern France is also a bit of a mystery. The most common theory is that it was popularised by British troops who were stationed all across this region during the First World War. However, local paper La Voix du Nord has suggested an even older origin for the dish, back in the sixteenth century when a garrison of Welsh troops was besieged near Boulogne.

The Flemish influence in the region can be seen in many renowned local dishes, including potjevleesch (which translates as potted meat), a terrine-like mix of pork, chicken, veal and rabbit flavoured with juniper berries and topped with a layer of gelatine. Traditionally the dish is served with chips on it in order to melt the gelatine. Another dish that has a strong Belgian influence is carbonade flamande, a close relation to boeuf bourguignon, in which beer and onions are simmered in beer (brown usually) suffused with gingerbread and brown sugar.

If you’ve still got space after all of that meat and melted cheese, you can finish up with the local pastry, aptly called Le Calais, which is a coffee- and chicory-flavoured cake. Almost inevitably given the proximity to Belgium, waffles are also popular with the local variation being that they are served with a topping of vergeoise, a brown sugar that’s derived from sugar beet rather than cane.