Gastro guide to the Tour: stage 10 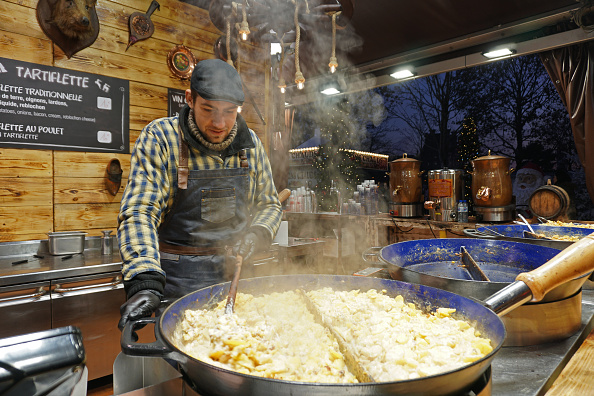 Looking a little like small meat faggots or meatballs, attriaux are a speciality of Savoie and the French-speaking Romandie region of Switzerland. Formed with minced pork, minced pork liver, parsley and spices, and then wrapped up in pork crackling and roasted in the oven, they’re then served with a white wine jus and can be eaten hot or cold. The dish is celebrated in an annual festival held each September in Thonon-les-Bains on the southern shore of Lake Geneva.

Taking its name from the generic title given to aromatic plants found in the high mountains (usually between 2,400-3,000 metres), génépi is a herbal liqueur produced mainly in Savoie and the neighbouring Italian province of Aosta, which is partly French-speaking. Sprigs of these plants are macerated in eau de vie for six weeks, then mixed with a little water and syrup, the combination resulting in a bitter, aromatic and potent drink to which green plant colouring is added. It’s said to be good for altitude sickness and digestive complaints. The collection of génépi sprigs is strictly controlled to prevent damage to the landscape.

The Aravis massif close to the west of Megève is renowned for the production of reblochon cheese, the name stemming from the word “reblocher”, meaning to “pinch a cow’s udder again”. It described how 14th century farmers would refrain from fully milking their cows because they had to pay tax on the production to local landowners. Once their yield had been measured, they would milk the cows again, and the milk produced would be very rich and used to make soft cheese. Reblochon is now renowned as the central ingredient in tartiflette, a Savoie gratin made with potatoes, onions and bacon.

Another Savoyard cheese to look out for is Beaufort, a firm, Gruyère-like cheese, although it differs from others in that same family as it doesn’t have holes. It’s often used to make fondue because it melts easily.

Today’s finish town boasts its own distinctive confectionary, glaçons de Megève. Produced for more than a century by the Vigliengo family who still have a shop in the resort, the glaçons comprise delicate chocolate praline covered in fine meringue.