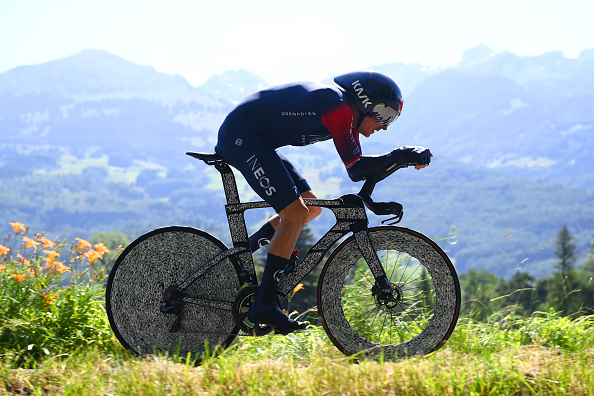 In Tour de Force, the third part of his autobiography that focuses on his return to sprinting success at last year’s Tour de France, Mark Cavendish recounts how he was almost caught up in the crash on the race’s third stage in Brittany that left his long-time friend, former teammate and 2018 Tour winner Geraint Thomas with a dislocated shoulder and, despite it being popped back in, no chance of contesting the fight for the yellow jersey.

Cavendish’s first thought was for his mate on the ground. He searched out their mutual friend, Thomas’s fellow Welshman Luke Rowe, and asked the Ineos rider how his teammate was. “You know how much they’ve committed so that they’re at their best at the Tour, and I know all too well how devastating it is when all that preparation comes to nothing,” Cavendish says. He then adds incidents like this have a tendency to happen to Thomas, revealing that he and Rowe “have had this joke about G crashing since we were kids. He just crashes, he always has”.

It’s a tag that’s long stuck to the Welshman, often unfairly applied on the occasion of high-profile tumbles that have prevented him to chasing some of the biggest prizes on the calendar when he’s seemed to be in perfect shape to challenge for them. There was the 2017 fall on the Giro d’Italia stage to the Blockhaus, caused by a motorbike marshal stopping on the racing line, the collision resulting in a domino effect that saw Thomas and then Sky teammate Mikel Landa lose their GC hopes. Two months later, lying second overall, he abandoned the Tour when a rider crashed in front of him on an Alpine descent. In 2020, his Giro hopes were torpedoed by a filled water bottle that rolled through the whole peloton before ending up under his wheel, the resultant fall leaving him with a fractured hip.

Yet, when fortune does go the Welshman’s way he’s shown that he’s got the ability to capture the biggest prizes, the greatest of all in fact. It was certainly on his side at the Tour of Switzerland, where Covid sidelined several of the leading contenders, including mid-race yellow jersey Aleksandr Vlasov. Yet, throughout, Thomas was very competitive, in the mountains to start with, and then impressively so in the concluding time trial, where he finished just three seconds down on winner Remco Evenepoel, no mean feat.

Also on the plus side, Ineos support crew appear to be in extremely nick too. Dylan van Baarle and especially Dani Martínez stood out in Switzerland, the Colombian blowing away most of Thomas’s rivals on the crucial final climb of the race on Saturday, then strong enough to take fourth place in the final time trial, a performance that underlined that his shot at GC leadership should come soon.

Not everything is running Thomas’s way, though. He turned 36 last month and is two years older than the oldest Tour winner in the modern era, Cadel Evans. More significantly, rather than having the peloton’s strongest Grand Tour rider racing alongside him in the same colours, as was the case with Chris Froome and, briefly, Egan Bernal, the Welshman is up against the most outstanding all-round talent the men’s sport has seen since Bernard Hinault in UAE Team Emirates’s Tadej Pogačar.

Ineos deputy team principal Rod Ellingworth told me at the Giro last month that there would be no point in the British team turning up to the Tour if they thought the Slovenian was unbeatable. Is Thomas the rider who can do that? Most would say not. However, as in 2018, fortune is turning the Welshman’s way and if it remains on his side he will certainly be one of Pogačar’s most dangerous rivals.

With Adam Yates, who was one of those hit by Covid in Switzerland, still likely to fill the place as Ineos’s co-leader at the Tour that had been designated to him, a “free electron” in the shape of Tom Pidcock and a powerful engine room of domestiques on the flat and in the mountains, it will be interesting to see how the British team play their cards. Although the mountains inevitably get most of the attention when it comes to the GC battle, the opening few days are especially tricky, like one Classic after another, full of potential traps.

If Thomas can avoid them, he and his team, the stand-out performers in the Classics so far this season, may find the route to putting Pogačar on the back foot.