How the Giro d’Italia has helped shape Italy 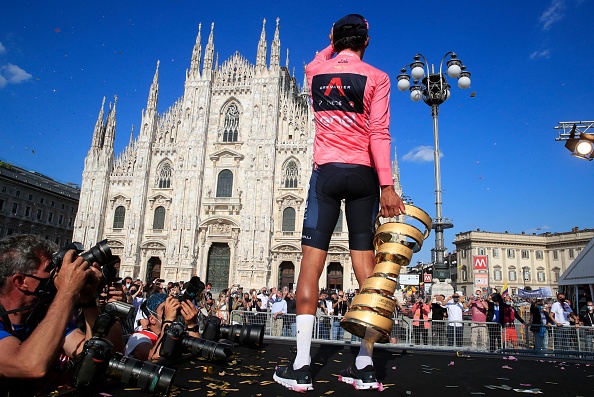 ‘The Giro’s uniquely Italian factors have enabled the race to hang on to its soul in a way the Tour de France hasn’t. There’s the history, and the tradition, but also the terrain.’

The Giro d’Italia melds into Italian society in other ways. There’s always been a fascination in Italy with furbismo, cunning ways in which one individual can steal a march over another. The race has seen more than its share of dirty tricks, including several allegations of rigged drugs tests – most notably when Eddy Merckx was disqualified in 1969 when firmly in the race lead — and the frankly bizarre episode in 1930 when the organisers paid the most dominant rider of the day, Alfredo Binda, to stay at home.

The French remain convinced that the 1984 race was stolen from their champion Laurent Fignon by a television helicopter which flew behind the home favourite Francesco Moser, so that it would “blow” him to the race lead in the final time trial. Needless to say, the allegation has never been proven.

The year before that, a bizarre police “sting” involving a strong laxative and a million-lire bung had led to allegations that dark forces were out to “poison” the eventual winner, Giuseppe Saronni. When Marco Pantani was forced out of the race after failing a drugs test in 1999, there were rumours that it was all a set-up from a betting syndicate.

Pantani’s eventual demise, on Valentine’s Day 2004, remains to this day, debated, subject to conspiracy theories and has in itself spawned a mini-industry that only serves to further mythologise his life and death. His shadow still looms large over the Giro and Italian cycling as a whole.

More substantially, Italy’s great stage race has always been seen as a unifying force in a country which was brought together less than half a century before the first Giro and which was devastated by two World Wars, the second of which ended with a bitter, three-way civil conflict. In this context, having people across the country square off over Coppi and Bartali was seen as a positive development.

The Giro of 1946, 11 days after the referendum which formed the current Republic, had a special sense of mission. The Giro della ricostruzione as it became known, took place through the former battlefields, over pontoon bridges erected by the liberating forces, on roads so damaged that sections of decent tarmac were mentioned in the race manual as something out of the ordinary, past cities where the population had fought starvation and repression; “serving a purpose which is greater than the race itself,” said one editorial.

That year the race visited Trieste, a city contested by Italy and Yugoslavia as the cold war began. With shots fired in the air by security forces, the riders scattered, and a diehard few were smuggled in by lorry to contest the finish.

The Trieste finish was the work of Vincenzo Torriani, who was later to take the race to pretty much everywhere in the tourist guides: Pisa’s Piazza dei Miracoli in 1977, the Vatican in 1975 and – my personal favourite – Venice’s Piazza San Marco in 1978. La serenissima has no roads, only its celebrated canals, so Torriani got his crew to put ramps with anti-slip mats over the bridges to link up the longest canal-side embankments, with the riders competing against a unique backdrop of historic churches, lapping waves and wobbling gondolas.

A few years earlier, Torriani’s race had gone through the Mont Blanc tunnel as part of a “Euro Giro” that started in the Belgian town of Verviers and took in Maastricht, Cologne, Luxembourg, Strasbourg and Geneva. Equally radical was a trip to Sardinia and Sicily in 1961 when the ferry that was carrying the race to Sicily could not dock – the port was too small – and a fleet of fishing vessels was roped in to ferry the caravan. Torriani also brought in the team time trial, and time bonuses for stage wins, although he wasn’t above loading the race with them when an Italian fastman like “Beppe” Saronni was going for the win.

The gimmicks are one thing – a Belfast and Dublin start in 2014, this year’s opening stages in Hungary – but it’s uniquely Italian factors that have enabled the Giro to hang on to its soul in a way the Tour de France hasn’t. There’s the history, and the tradition, but also the terrain. Italy is blessed with a wealth of hilly roads and hilltop towns, enabling the race organisers to structure the three weeks so that, unlike the Tour, there is no tedious flat pre-amble to the key mountain stages. The racing at the Giro is nervous, and unpredictable. The sprinters don’t like it; the fans love it.

The hilly terrain makes it hard for a team to keep a lid on the race with strong collective riding, as so often happens at the Tour. Catenaccio may be Italian soccer’s speciality, but it doesn’t apply to its cycling. The 2010 race was defined by a frankly insane 54-rider breakaway which the big names allowed to gain 10 minutes, defying all racing logic. This is a race that produces freakish, unexpected wins – the Canadian Ryder Hesjedal in 2012, Chris Froome’s dramatic comeback and Simon Yates’s equally spectacular collapse in 2018. The 2017 and 2020 editions were total cliff-hangers, in abeyance until the final day when Tom Dumoulin and Tao Geogheghan-Hart emerged as winners.

2021 was dominated by Ineos and their young Colombian Egan Bernal, but it was a win forged on the dirt roads of Tuscany as much as in the highest mountains. The riders have generally been well served by generations of Giro organisers, who have worked on the principle that, as the legendary Torriani said, “if it rains, you get wet.” In other words, the riders have to put up with what the elements throw at them. 2013 and 2014 endured massive snowdrifts, but less apocalyptic scenes, and as late as 2020, the riders went on strike to force the curtailment of a marathon stage through bone-chilling rain.

There have been times when this hasn’t worked, such as an abortive attempt to run the race over the vertiginous Monte Crostis in 2011, but sometimes, the organisers’ determination truly pays off. The climb of Monte Zoncolan in the north-east was brought in in 2003 and its 23% slopes have been used six times since, while the 2010 decision to force the race through the deep mud of the Tuscan dirt tracks created dramatic images that cemented the sterrate, in the sport’s consciousness. That in turn led to the foundation of a one-day race, Strade Bianche, that is now a fixture on the calendar.

The Giro’s future is by no means as certain as that of the Tour de France. There’s no talk of pay-on-demand soap operas, the pink jersey isn’t exported world wide, and while the women’s Giro is a fixture on the calendar it’s not run by the men’s Giro organisers and its fortunes wax and wane from year to year. It’s never quite clear what the next year will bring for the men’s Giro either. With any luck it won’t bring a buy-out by one of the emerging economic powers within the sport, and the race will retain its Italian soul, and its place in the heart of the fans.