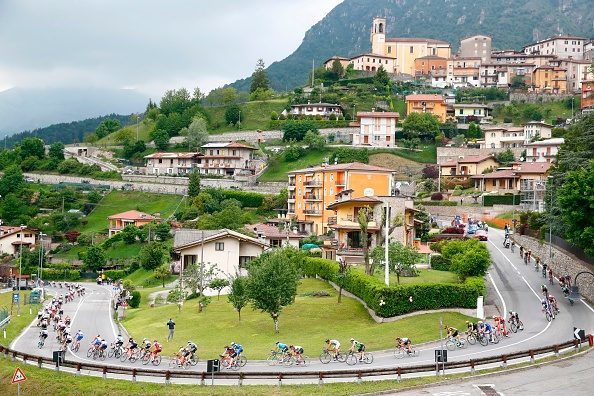 ‘The Giro, unlike the Tour, it clearly isn’t on a mission to export itself to the world as a unitary “brand”. That’s one reason why it retains its place in the hearts of the tifosi, who travel from all over the country to line the mountain passes with their camper vans…’

A long time ago, I made friends with an Italian called Renzo. Renzo was a tifoso, a bike racing fan. He ran a bakery in a small Italian town you’ve never heard of. He ran a small local cycling club, and organised an amateur race around the town. His nephew – who died tragically in a car accident – was a successful professional, and Renzo liked to be around the bike races. Cycling was in Renzo’s blood, and I think of him when I watch the Giro d’Italia peloton ride up the mountains of the Apennines and the Alps through a corridor of baying fans, and when I read these words by the great writer, Orio Vergani.

“Look in their faces one by one, eight or 10 million Italians who push their faces against the window of our cars. It is a thing that is only possible with the Giro d’Italia.” That was written in 1955, and Vergani added that “following the Giro is a way of getting to know the Italians, to discover secrets about their way of life, their tastes, their fanaticism, their customs.”

The Giro can seem like the impoverished cousin of the Tour de France, which has become a bloated giant in the last 30 years. The Tour is a cash cow for lucrative television rights, a race which most of the best riders dare not miss. The Giro sometimes struggles to put its television deals together – 2021 being a case in point – and it doesn’t draw a field that’s the same quality as the Tour.

The Giro’s organisers have yet to branch out into running women’s races, and when Netflix came calling on cycling, they banged on the door of the Tour, not its Italian cousin. Economically, the weakness of Italian bike racing is seen in one fact: there is no Italian squad in the men’s WorldTour, cycling’s elite. For a nation that has been one of the powerhouses of the bike industry, and which has a history second to none, that’s disturbing.

The Giro’s saving grace is that it has stayed closer to its roots than either of the other two major Tours. The Vuelta a Espana, following its shift to an autumn date and its effective takeover by the Tour de France organisers, can look like a one-trick pony, ever more dependent on a proliferation of identikit mountain top finishes, each steeper than the last. At the Tour, there are many places where the roadsides are dominated by fans holidaying from outside France, while the locals just want to get on with their lives.

The Giro retains its pink jersey – for the pages of the original sponsoring newspaper La Gazzetta dello Sport – with pride, and unlike the Tour, it clearly isn’t on a mission to export itself to the world as a unitary “brand”. That’s one reason why it retains its place in the hearts of the tifosi, the ultra-passionate fans who travel from all over the country to line the mountain passes with their camper vans and their banners for the most obscure Italian riders.

The tifosi have made the Giro what it is, at times over stepping the boundaries of taste and ethics by, variously, brandishing raw steaks at riders they don’t like, and pushing those they do. In 2001, the insults yelled in the face of Vladimir Belli at the Giro were so vicious that he stopped and thumped his abuser. In 1967, at one mountain top finish, the favourites “barely needed to pedal”, thanks to the efforts of their devoted fans.

Like Italian football and Italian opera, the Giro has always had a larger in life, slightly anarchic quality to it. It was founded in 1913, amidst a circulation war when La Gazzetta was on the point of going bust, and there was a struggle to find the cash to run the first edition. It introduced the pink jersey in 1931, and survived fascism largely unnoticed, partly, it was rumoured, because Mussolini considered the pink jersey effeminate and didn’t want to be associated with the race.

Its parochialism is seen in the fact that it took until 1950 for the first non-Italian victory, to the Swiss Hugo Koblet. It has its own traditions such as the “black jersey”, an honorary title for the last man rather than the Tour de France’s “red lantern”. It is also the only Grand Tour that has included a woman in its field, although Alfonsina Strada had to disguise her name on the entry list to make sure she got her place in the 1924. She finished 20 hours ahead of the last man, the maglia nera.

Along the way, the Giro acquired a reputation for foul weather. It is run just where spring morphs into early summer, and up in the Dolomites, that can mean snow. 1956 at Monde Bondone, 1968 at Tre Cime di Lavaredo, 1975 atop the Stelvio, and 1988 over the dirt track of the Gavia pass: all, infamously, saw scenes like some kind of cycling hell, with hypothermic riders wrapped in blankets by the roadside, some reduced to urinating on their hands to keep warm.

The rivalry that defines Italian cycling, between Fausto Coppi and Gino Bartali in the 1940s, came to be seen as a microcosm of social change in a staunchly Catholic country, as well as a passionate battle on the road. Coppi was lambasted for his relationship with a married woman, Giulia Occhini – the state eventually took them to court – while Bartali was a paragon of Catholic devotion with his own private chapel. He was a paragon who smoked and swore but his virtue was real: it was revealed recently that he had worked for the Italian resistance in the war, ferrying forged papers stuffed down the frame of his bike to enable Jewish refugees to escape the Nazis.

“A whole generation of Italians grew up with memories of summer afternoons clustered around a crackly wireless listening to the heroic deeds of Bartali and Coppi,” wrote the Rome-based Irish journalist Paddy Agnew, before making this point: “The next generation grew up with memories of their parents telling them about those summer afternoons.” They learned of Coppi’s delightful style on his bike, his peasant roots and his tragic early death from malaria, and Bartali’s bizarre superstitions and indifference to pain.

Coppi and Bartali’s fans were known to come to blows, but relations between the pair never reached the nadir seen in the 1987 Giro, won by the Irishman Stephen Roche after a battle with his own team mate Roberto Visentini, the winner the previous year. Roche was held to have “betrayed” his leader, and spent the final week of the race riding through a rain of spittle, a hail of pink paper balls – screwed up pages of La Gazzetta – and with pieces of raw meat shaken in his face to show him that the tifosi wanted to tear him apart. It was outrageous soap opera, and it sold loads of copies of La Gazzetta.

Coppi and Bartali will always be the reference points, but most Italian campioni have their extreme side. The defining image of their contemporary Fiorenzo Magni – winner in 1948, 1951 and 1955 – is a picture where he has his teeth clamped around an inner tube tied to his handlebars. Magni had broken his collarbone early in the race, and pulling on the tube helped him pedal through the pain en route to second place in the 1956 race, which he finished with a second fracture, of the humerus.

Forty years after Fiorenzi Magni literally gritted his teeth to place second in the 1956 Giro, Mario Cipollini and Marco Pantani took the tradition to its cartoonish limits.

The sprinter Cipollini, variously known as “Moussolini” (his hair gel), “The Lion King” (his mane of hair) and “SuperMario,” marketed himself as a sex(ist) god who spoke uninhibitedly about his love of amore, quite the development in a sport where abstinence was a tradition. He also swapped his kit daily – tiger suits, suits with all the internal organs of the body on them, peace logos – incurring the ire of the authorities.

Pantani, meanwhile, was known as Elefantino (Dumbo – for his prominent ears) but eventually adopted the persona of the pirate, with a skull and crossbones logo on everything he wore and rode. Cipollini sprinted to 42 stage wins, a record, after proclaiming that “ejaculating costs only 20 calories, the same as a bar of chocolate”; Pantani won the 1998 Giro and retains iconic status for his ability to accelerate up a mountain in spite of a drug scandal and tragic early death.