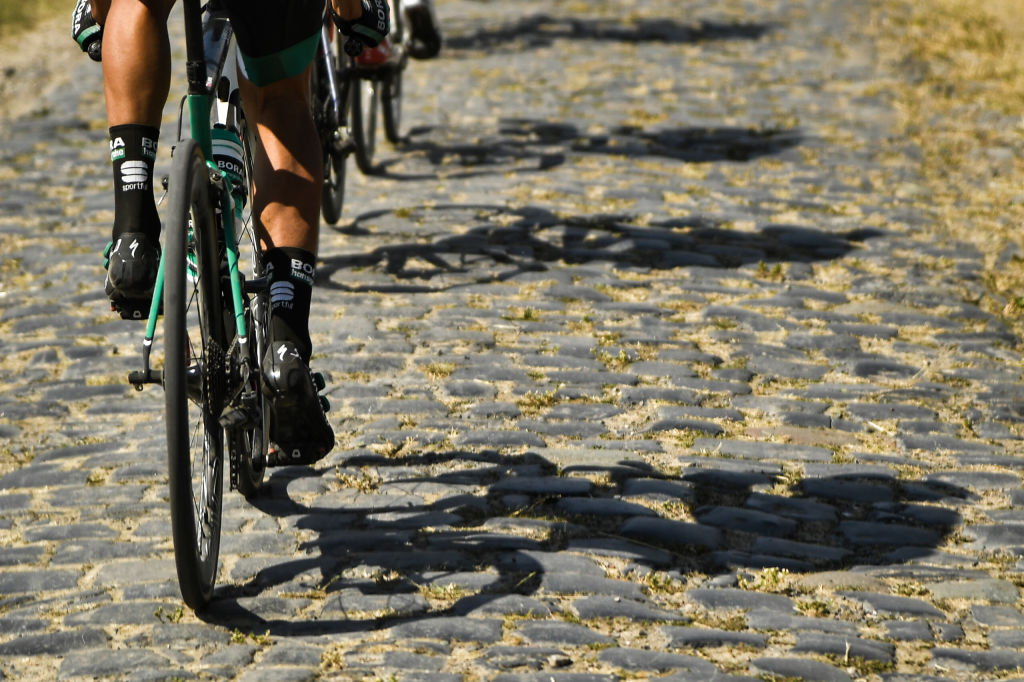 Today's 11 cobbled sectors are an unwelcome challenge for most of the peloton. (Getty Images)
Wednesday 6th July 2022
Share

When the Tour peloton hits the cobbles, you know you can expect drama.

The wacky races are nearly over. We’ve had the city centre time trial in the rain, the mega bridge in the headwind, the white cliffs of Calais – now it’s time for the Hell of the North. Increasingly the Tour de France is designed for a global television audience and every year there are stages that are designed to bring even bigger audiences to the race.

In the search to avoid any boring bits, stages from Le Mans to Tours, Orleans to Bourges, Reims to Troyes are thin on the ground these days. In the old days, they were part of the mix in the Tour’s first week, but not any more. So instead Stage five, from Lille to Arenberg, fits the wacky races description, as it includes 11 sections of the infamous cobbled roads that are used in the legendary spring Classic Paris-Roubaix.

“Personally, I’m not a big fan of this stage (being in the Tour),” Matt White, former Classics specialist and sports director to Team BikeExchange Jayco said. “For the riders going for the GC, the first week of the Tour is stressful enough. Imagine preparing all year for the Tour de France and then you’re involved in a crash on the cobbles. This stage will have little fellas boxing on with the bigger guys. It multiplies the chances of crashes. Nobody wants to see a rider to lose the Tour due to bad luck. Potentially somebody will.”

Of course, cobbled stages in the Tour are nothing new. Usually they exert a price, with the 2014 stage to Arenberg, raced in a downpour, being the best recent example of that, as Vincenzo Nibali used his agility and power to build an overall lead that steadily increased en route to Paris. The big victim that day was Chris Froome, although of course he quit the race even before the pave was reached.

But racing them in April, with a field of Classics specialists is one thing; racing in July with a team based on GC aspirations, replete with climbers, is another thing already. Take Jumbo-Visma for example. They have a rider in incredible form – Wout Van Aert – in the Maillot Jaune, who would no doubt love to win in Arenberg. They have another, Jonas Vingegaard, also in what looks like his best form, lacking experience on the cobbles but with a chance of overall victory. So how do they play it?

In contrast, Team BikeExchange-Jayco don’t have a GC contender, so can commit fully to trying to win the stage.

“A lot of those guys, who want to be there, are there because they have leaders to protect. It’s the drama of Roubaix but it’s a different vibe. The big guys can’t rip it up because they’ll put their GC leader under pressure. It all depends on what your team’s goal is.

“We haven’t got a GC rider, so we can treat it like a one-day race, whereas when we did the cobbles with Adam (Yates) we had Matt Hayman – a Paris-Roubaix winner – staying with him.”

“I don’t know what Jumbo-Visma will do. They have a guy who wants to win the stage and two guys who potentially can win the Tour de France. There’s a lot of different scenarios that can pan out, but it’s not a normal Roubaix tactically.”

Tom Southam, sports director to Education EF EasyPost said that the Tour’s visit to the pave takes “a lot more work from the equipment side”.

“In the spring Classics, we have spare wheels everywhere, all across northern France. That’s a whole side operation that we don’t normally have to run in the Tour. Like, ‘how is this guy going to get our team car from here to here?’ and then ‘Oh, he’s Belgian, so he knows the guy who owns the field so he can cut through there.’”

“There’s all that going on, which is extra work from logistics. For the riders they have to tackle it head on, and I think we will draw a line under that stage to see where everything stands in the whole race. That’s the end of the weird stuff. We have to get through as best as possible and without delving too deeply into tactics, you have to race the stage from the front.”

Southam agrees with White though, that it’s a stage apart from the rest of the Tour.

“When Nibali got the time in 2014 the stage made a big difference, but in 2018 the only person to lose time was Rigo (Urán). Everybody else somehow made it back. From what I understand from local knowledge the cobbles aren’t quite as bad as they are in spring – there’s more grass growing between them and they’re faster. There will still be someone who’s unfortunate and loses time, but if you look at how strong the leading teams are now, they should be able to fix most problems. You can fix stuff if you’ve got the numbers there.”