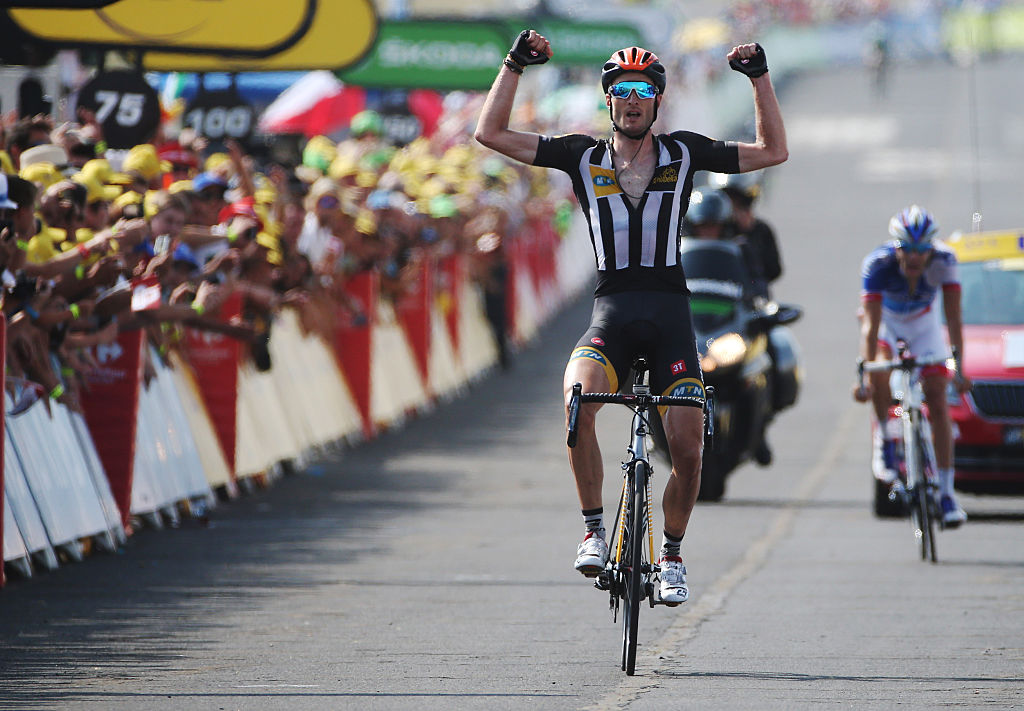 On Saturday, the Tour de France returns to the steep climb at the remote airfield in Mende, where, in 2015, Steve Cummings outfoxed Thibaut Pinot and Romain Bardet to take a memorable stage win…

“It so happened that I’d been up the climb to Mende airfield before, in the 2010 Paris-Nice race, and five years later that was a good advantage. I’d also watched videos of previous races with the same climb. I knew that Mende was really hard when it started coming out of the town, then it got a little easier, then it was really steep again to the top.

“The key thing was not to go all out at the start, because if someone went bonkers and ramped up their power output to 700 watts and way into the red, they wouldn’t be able to keep racing that hard for that long on a climb that steep and they’d lose the momentum they needed to stay in contention.

“My time-trialling strategy for the climb was that for all bar the last couple of hundred metres I’d try to use the draft of the others where the speed would be higher as it wasn’t so steep.

“I needed to be sure I was racing on the upper limit of my possible effort, but without actually forcing myself so hard that after 20 or 30 seconds I’d crack – a balancing act. That sort of threshold strategy, going steady for a long time at a high pace, was something I practised in training twice a week, three times in each session.

“You learn to feel your limit and you become good at finding the red line beyond which you’d crack and staying right on that line. But then – and I also did this in training – the key part of this strategy was that when you saw the top of the climb, the end of your effort, you suddenly tried to do the exact opposite of what you’d been doing up to then.

“In other words, when you see the top of the climb, with maybe 200 metres to go, rather than staying steady, you’d push yourself beyond threshold and you’d give it everything you had. The pain would build and build, although actually I’d kind of enjoy that, because it’d confirm my sense of leaving it all out there and I’d trained myself to go through this process and deliver that in the race.

“This tactic consists of learning how to blow right at the top of a climb, exactly at the summit and not a metre before, which would be catastrophic.

“So, when we get to the final climb to Mende airfield, at the bottom I don’t chase when the other guys shoot ahead of me up the road: Bardet, Urán, Yates, Pinot.

“Rather than cooking myself by going too hard, I keep my pace high, but steady, staying in the draft even if it looks like I’m the first to be dropped on TV, and as we get higher on the climb, I find my strategy works. I fall back at first in the order of the riders, but then I bottom out and come back up again. And by time-trialling it, I pick off my rivals on the climb and I go past the other breakaways who have attacked or gone too fast too soon in the first part of the ascent, one by one.

“I’m thinking to myself, ‘Fourth on the stage,’ ‘Third on the stage,’ as I go past them. I come over the top of that horrible steep climb just as I’d wanted to, timing it so I’m exactly at the point where I’ve ridden myself to shreds as I go over the summit, and then just as I’m picking up momentum on the downhill, they are right there. Bardet and Pinot, the last guys from the break who attacked ahead of me, and I haven’t yet caught, are there, within sight, and I think, ‘This’ll be good – I’ll get third on the stage.’

“But it gets better. With my momentum picking up after the summit, I charge past them on a downhill just before the last, flatter kilometre to the finish. Rather than play games, I go straight to the front and take the lead.

“One thing you learn from being in breaks is your rivals’ characteristics, and I know Pinot is cautious when it comes to corners. We’ve got two corners left, in a downhill chicane before we get to the long, flat finishing straight along an airfield runway. Bardet is much better at cornering, but as I go past it’s Pinot who is swinging in right behind me and that instantly gives me an advantage.

“I go through these downhill corners flat out, and as soon as I’ve got a little gap on Pinot, I put my head down and go even harder. After climbing Mende [during Paris-Nice] in 2010, I know once I come through the last corner that there are about 600 metres of straight, along the airfield runway to the finish.

“I also know that, with my power and my position on the bike, if those guys give me a 10-metre advantage, they’re not going to get back on terms. My position on the bike is so aerodynamic compared to those two bollards, sitting up like that. With the momentum I’ve got on a flat course, I’m going to be well on my way. I’m getting this.

“In the very last part of the stage, almost at the line, the two of them get out of the saddle, all but flapping their arms around; they’re making such a hard last effort to try to catch me. But to be honest, as soon as I catch Bardet and Pinot I think, ‘There’s no way I’m not going to win this stage. I cannot lose, I cannot lose.

“And that is a nice feeling, because for my entire career, I’ve been waiting for that moment, for the biggest win of my life as a rider. In the Tour de France. And as I pedal towards the finish ahead of them, I know it’s here. I’ve got it. It’s the dream. It’s mine.

“I was so grateful to the team for giving me the opportunity and freedom. I still am. But at the same time, I know I’ve earned that opportunity through good results and hard work and discipline – which gave me freedom, and being strong mentally, trying to make myself better in every aspect of my racing, because I wasn’t ever good enough at any one thing in particular.

“As I explain to somebody later that evening, all through the stage I’d been thinking about strategy, what I call ‘process’, nothing but process. It had all been rational, and with a plan that developed as the race evolved, but that’s how I am when I’m in that zone. I’d been there all day.

“Then when I cross the line, all of a sudden, the emotional side of it kicks in and it’s like, ‘Holy fuck, what have I just done?’ It’s the dream scenario, the schoolboy dream of winning against those odds. It’s been super-nice too, because with 100 metres to go I know I’ve won.

“It’s a relief, a massive weight off my shoulders because of the challenges we overcame on the journey to get there in the days and months and years before. All of a sudden, it’s all become worthwhile.”

*The Break: Life as a Cycling Maverick, by Steve Cummings, published by Allen and Unwin, is available now.